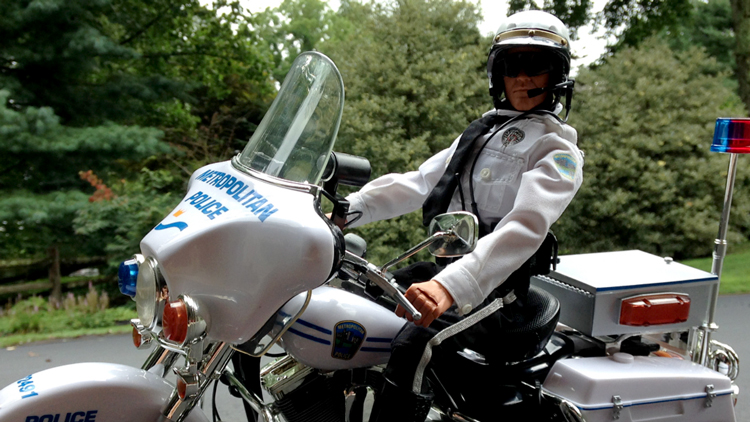 Hey, what’s up guys? Welcome back. Today I’m showing you guys an awesome GI Joe set. This is the Electra Glide Harley, number three in the Harley Davidson series. If you watched my Top 10 wanted GI Joe video that I put out a few years ago, then you’d know that this figure on this set has been on my wanted list for a good while now.

The reason why it took me so long to get it, not because the rarity, but this one usually goes for around a hundred bucks that I’ve seen, and it’s easy to see why. I mean this is a beautiful set, but I happened to get it for $68 with shopping using “Buy it Now” option off Ebay, which to me is just a fantastic price. 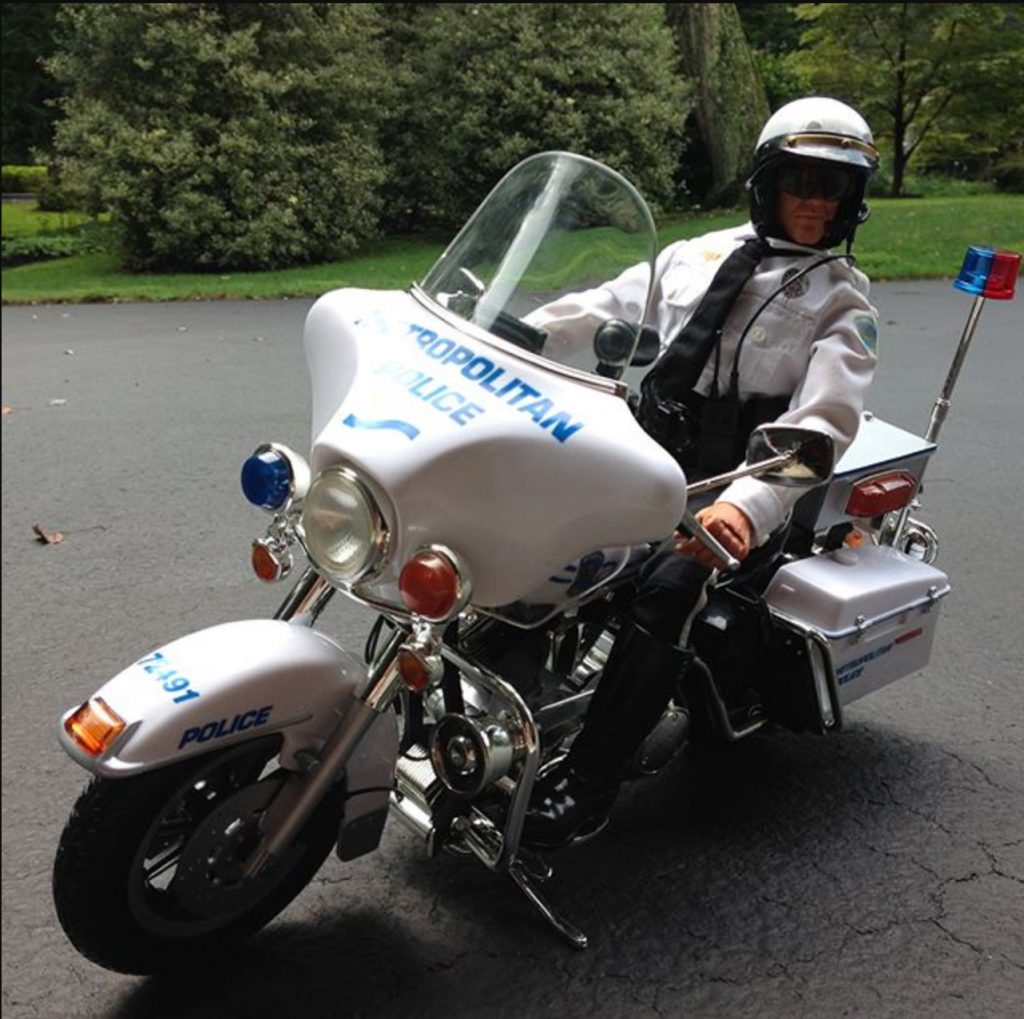 But as I did in my other Harley Davidson video that I did not too long ago, I’ll just show you the box and what the figure looks like inside of the box, because it just looks so good with the figure inside of there. Then I’ll do a part two, and we’ll take a look at the motorcycle and the figure in more detail, but here’s the box.

Okay, you’ve got the Harley-Davidson logo there and hopefully the lighting’s good for you, but there is the figure on his motorcycle and, wow, this just looks beautiful guys. I’m so excited to finally have this. It’s been so long since I’ve wanted this on. The detail just looks amazing on this one, even on the side it’s says, “Adult Collectable,” so this is not for kids. You can definitely see that.

Here is the equipment list. Okay, let’s take a look at the back of the box. We got a picture of the figure on his motorcycle, it comes with a nice stand as well, and that looks great. There is description for you. Okay, and this one came out in 2001. All right, so I think that’s everything to show with the box. It’s hard to take these out of the box, it looks so good in there, but I’m anxious to get him out here and to take a look at everything that he comes with.

So give me a second and I will take him out. All right guys, so I got the figure and his Harley out of the box, and now here he is on his display stand. Wow, that’s all I can really say guys, just wow. This is a beautiful set. I really, really love this set. Now let’s just take a moment and look at this guy on his display stand. I’ll get some different angles for you.

Here he is from the front. The front of this looks beautiful. There’s the back, and back to the side. Really, this just looks fantastic. I guess I’ll take the figure off first, we can take a look at him. All right, this is a really cool figure, one of their newer models, which is nice ’cause he’s got the nice bendable hands, moveable fingers I should say. 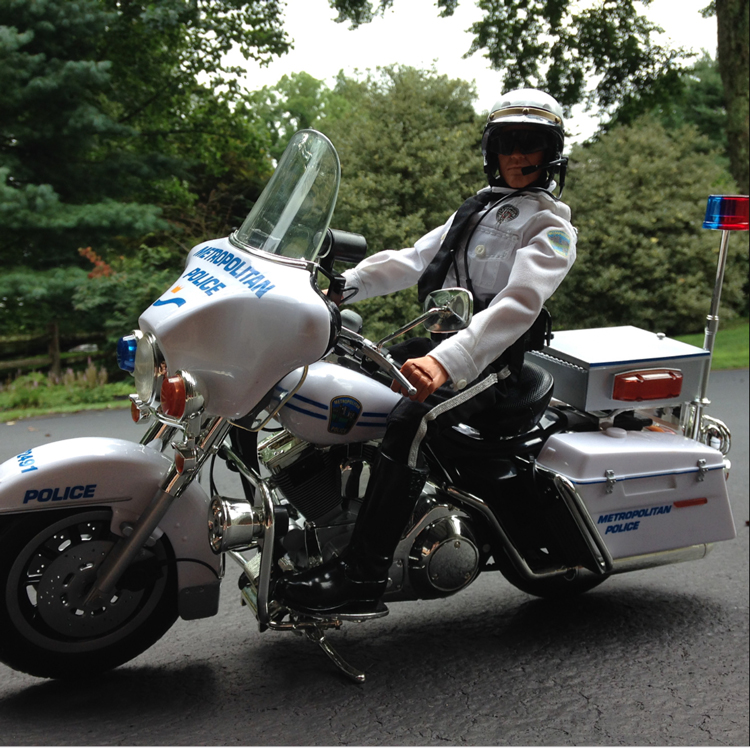 Let me get this in focus for you. There we go. Okay. So overall this figure looks great, and this is very unique to the set. Okay, I guess for starters, let’s take a look at his belt. On his side he’s got his holster, he’s got his handgun, got some more pouches in the back, some more pouches, and he’s got his radio over her, and that’s hooked up to his helmet.

Let’s take a look at this handgun, ’cause this is very unique. I’ve never seen any GI Joe handgun like this before. That’s pretty cool. I like the paint on there, not any functions, but it looks good. Like I said, I don’t think I’ve ever seen that type of handgun a GI Joe figure, so it might be exclusive for this set, I’m not sure.

But there he is holding it. That looks really cool. All right, let’s take a look at the figure’s helmet, ’cause that looks really good. So he’s got some shades here, some sunglasses. Very nice. All right, there’s his helmet, and that’s attached to his radio. But this looks great, I really like this helmet a lot.

It’s got padding inside, very nicely detailed, looks good, looks great on the figure. Here’s the figure’s head scope. This is a really cool head scope. I only have two of this one now. This is one of their rare head scopes that came out, don’t see this one a whole lot. It looks very cool.

Let’s take a look at his uniform. A very cool uniform. I like his black tie, it looks good. Got some stickers here. Sorry, let me try and get that in focus for you. All right, and his pants as well are really cool. I like the silver lining on the sides, it looks good. He’s got these high top boots, which are also really nice. Very shiny looking, they look very nice.

As cool as the figure is, the highlight of this set is obviously the motorcycle. This is beautiful. Hasbro did a phenomenal job on this. The detail is really just amazing. The other bike I got is very cool as well, but this one I think the detail is just a lot better. You can tell they put a lot of love into this. 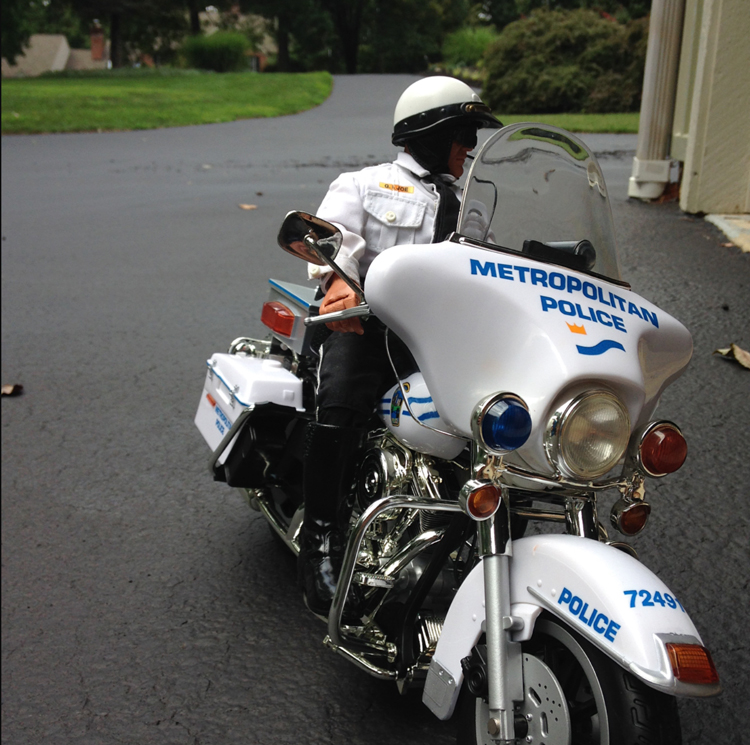 So I’ll just try to show you briefly the different details about the bike I guess for starters, it does have working shocks, so you can push it down. The seat is really cool. You can push that down as well. Good range of moveability there, that’s really nice. The front I think is my favorite part. I just think this looks beautiful, and let me try to get this all in the camera so you can see it.

But the front looks great, I love this section up here. Very nice. You’ve got the emergency lights and the windshield, really cool. I believe that’s the siren on the side. Okay, there is the engine, and then it got some little details here. You can push this down. Below is a side stand which works very well.

If you don’t want to use that, it also has a center stand, which I think works even better. All right, there it is up close. I’ll try to get that in focus for you. Got some great details here. I love this section here. It looks great. On the other side got some more details. This right here is really cool.

Okay, let’s take a look at the dashboard, and this is very realistic. I don’t know if you can see this … how well you can see this, but the gauges inside are very nicely detailed. They’re not … the other motorcycle I have just I think had a sticker, but these look very realistic. Very nice, and you see the speakers on the side here. Just excellent detailing. Got the mirrors on each side, very nice. 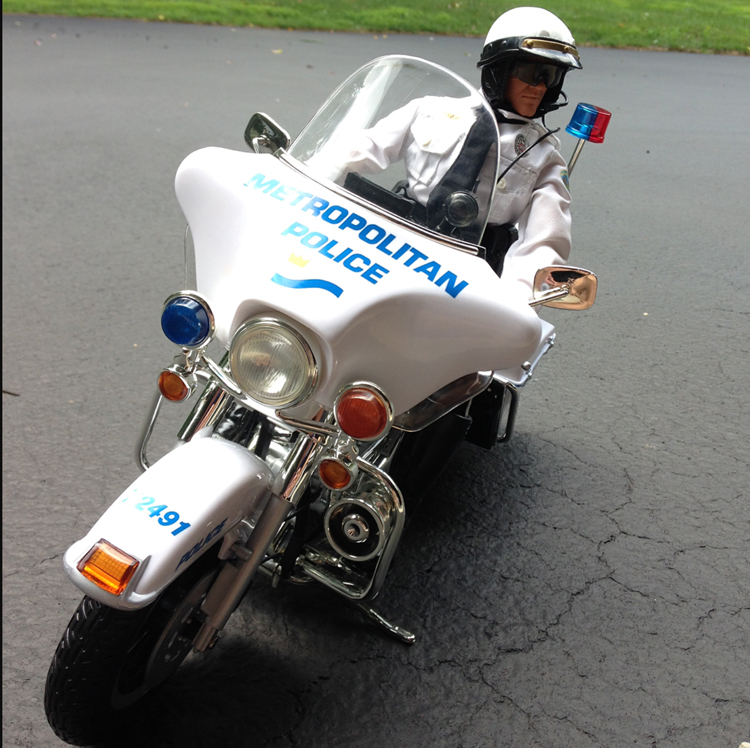 Also the grips here, just really nicely detailed. I think … yeah, I believe this in the front is the radar. Yeah, that’s the radar gun. There’s a better look at the seat, and the back is equally as beautiful. We’ve got the saddlebags here, and those looks great. I just love the contrast of colors, the white with the blue. I think that just looks so good.

Got some more lights in the back, a lot of lights in the back. Up top is the beacon, which swivels, and that looks very nice as well. Okay, there’s the underside, get a better look at the wheels. Okay, and I think that’s pretty much all there is to show. Yeah, I think that’s it. So give me a second, I’m going to put the figure back on the bike, and then I’ll end the video.

All right guys, so there was actually one thing I forgot to mention. Over here near the dashboard is included a walkie talkie piece, and unfortunately the cord ripped. I guess it was in the box for so long and it was all dusty that it lost its stretchiness and it decided to rip on me, which is very unfortunate, ’cause that was a really nice detail. But I might try to glue it back on. I’m not sure how I can do that, but I will try. But I just thought I’d mention that.

Other than that, I believe that’s everything to show. So thanks for watching guys, I really hope you enjoyed this review. This is such an awesome GI Joe set and I highly recommend picking this up if you can. 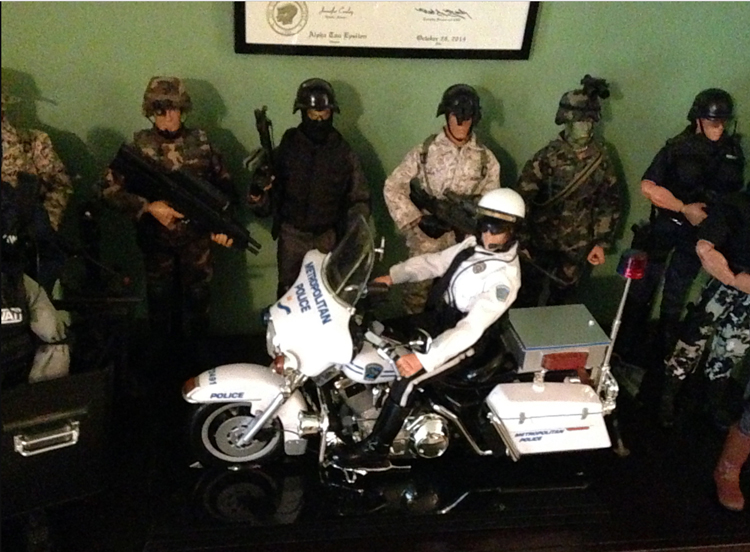