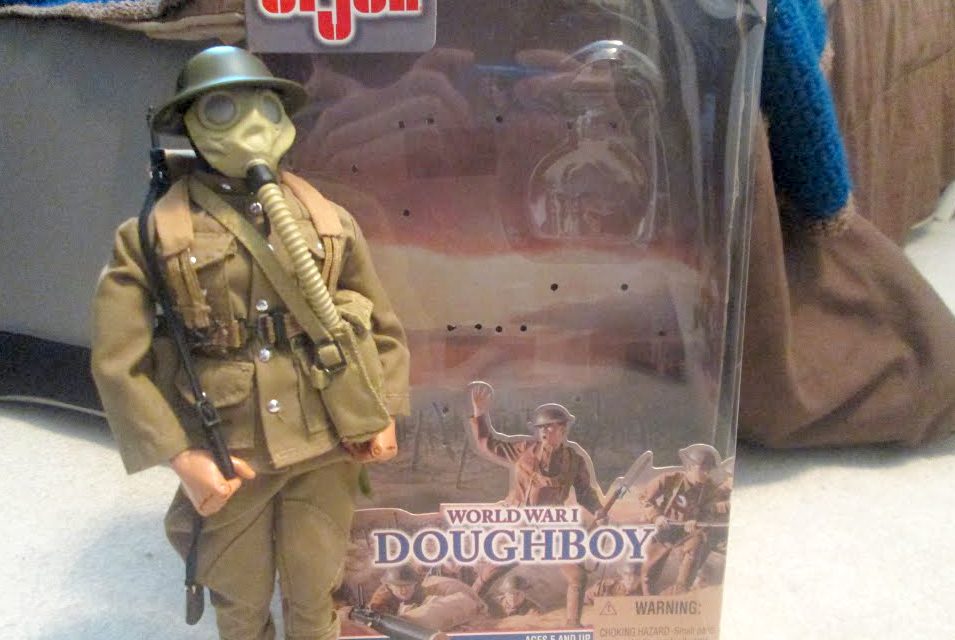 Read the transcript of this video with images below.

Hey, what’s up everybody? I got a really neat GI Joe to review today. We’re gonna be looking at the World War I Doughboy. This guy is amazingly, amazingly cool. I totally recommend him. He’s just really, really nice, really nice detailing. Yeah, a lot of work went into this guy. Let’s go ahead and get started. 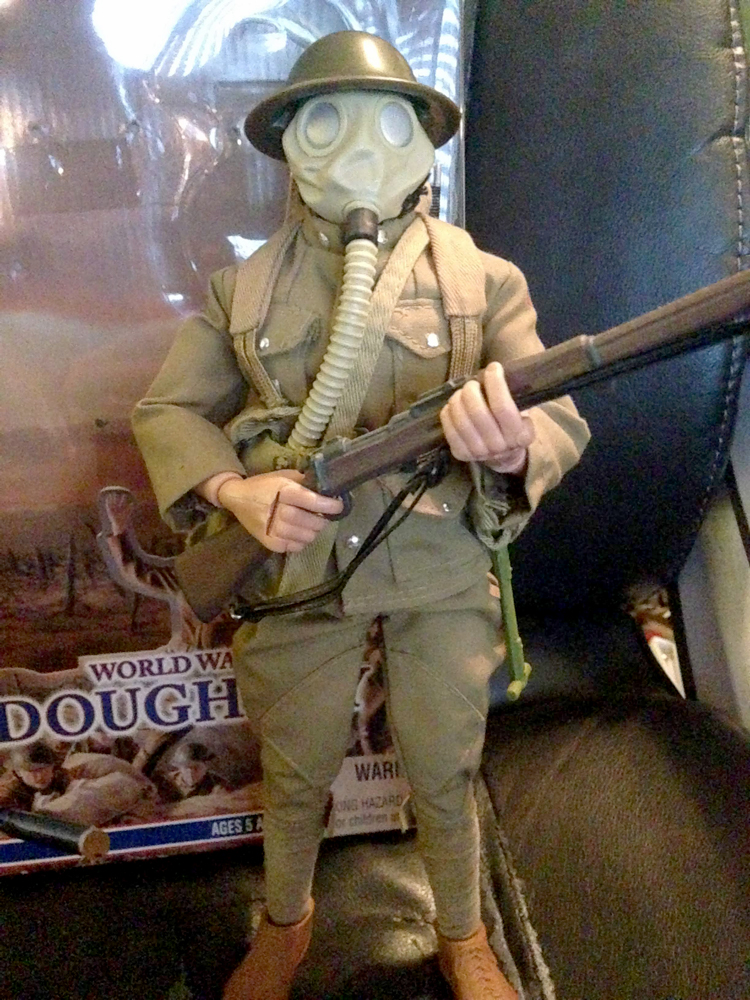 I’ll let you take a brief look at the box here. As I said, he’s a Doughboy from World War I. He’s part of the Echo Group. On the top we have the equipment list. Look at the side of the box. Not much to see there. Then on the back we got some nice looking artwork. Description of the Doughboys and this figure came out in 1999, so quite a while ago.

Here we go, let’s get started. Here is the Doughboy all geared up, some amazing detailing. It was totally worth the buy. Got him on Ebay for $30 or $40 bucks. Definitely worth it though. This guy is really nice. Really nice. You will be happy with them if you decide to buy him. Just looks great from all angles, great for posing.

I definitely recommend if you could find one to get one with articulated hands. They have other ones that are not articulated, just aren’t as good looking in my opinion, but if you can find one like this with the articulated fingers then totally buy him because it’s a lot better. Anyway, so here he is. Let me take off his rifle here and put it in his hands to give you another look at him. There he is with his rifle. Just a basic rifle there. Looks great.

All right. Also, I would like to mention that this guy just came with tons of equipment. He also comes with this. Hold on while I look up the name of this. It is a Browning M1917 machine gun with a tripod. This thing looks really good. We got some bullets. The paint job on here it looks really good. They kind of gave it a rusty look. Just that metal look. It looks great and it’s a little tricky, but you can get your figure to go down like this and to take aim and fire. There he is with his machine gun. Looks great. 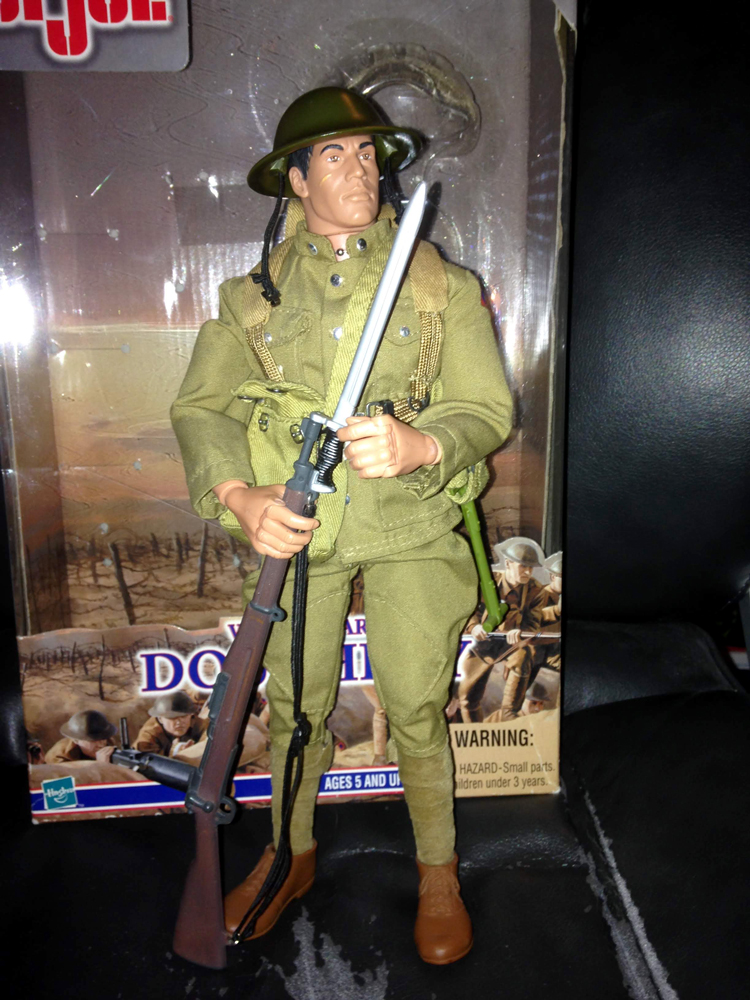 As I mentioned, just comes with a basic rifle. Just this basic Springfield rifle. It’s not a bad looking gun. It’s pretty cool. I would have liked to see this be able to move. They had another rifle like this where this can move, this little piece here, but not with this gun, but it’s all right. Got a nice strap there. Okay. Now let’s get to the actual figure because this is the best part. There he is again. Let me take off his helmet for starters. There he is with his helmet, typical Doughboy helmet. Looks pretty cool.

Let me take up his gas mask. That gas mask is really nice by the way. Love the detailing. It just represents that time period very well. There’s the gas mask. If you look inside you can actually see the face print of this guy. It’s kind of funny. There he is without his gas mask and I’ll put back on his helmet just to give you a look at him, what he you looks like without his gas mask. There he is. Looks cool. This face sculpt is really neat. They did a lot of these sculpts, but with different hair colors. In this case, this one is black hair. I really like the one with black hair a lot he looks really good. Yeah, that’s a pretty cool sculpt there.

Next I’ll take off his backpack type equipment here he has on his back. This is really nice. Just very realistic. Oh, we have a bayonet here which can be attached to his rifle, which I will show you. There we go. That is really cool. I’m glad they added that feature. That’s really nice. Got the sheath there, so you can put some stuff in that little satchel pouch thing.

I have never taken this out, but I believe this is some sort of sleeping bag or sleeping mat, or some sort of cloth. I don’t think I’m going to take it out. I don’t really want to mess it up. Once you take these kinds of things out they don’t usually go back and very nicely. I think I’m going to leave it there. Yeah, great quality. Nice cloth material. Looks really good. I was very impressed when I saw this.

Let me take off his bag. This is for his gas mask to go into I’m pretty sure, at least that if it isn’t it works pretty well. I don’t know where else this little piece goes because it fits very nicely in here. He does have a shovel on his back. It’s a cool looking shovel. It’s got these edges here, and also he has a canteen. It’s not bad. Not the most realistic canteen have I’ve ever seen, but it’s not bad. There’s that.

There’s his outfit, his uniform. It’s like a pea green. Got a nice design there. I don’t know what ranking that is. It might be a sergeant. I’m not very good with my rankings. Sorry if I messed that up, but also can’t be a Doughboy without these cloth wrappings around your legs and Hasbro did a great job with that. I won’t take those off just because they’re a real pain to put back on, but you could see them there for yourself. That nice cloth material. Glad they put that there.

Then we got these big shoes here. They look very nice. I will mention his dog tag because it’s a little different from the regular dog tag they give you. Instead of that almost rectangular shape, instead it’s a circular shape. Usually you don’t see that with a dog tag, but this one’s very different in the design on there are two rifles crossing each other, so that’s pretty cool. Just thought I’d show you that. 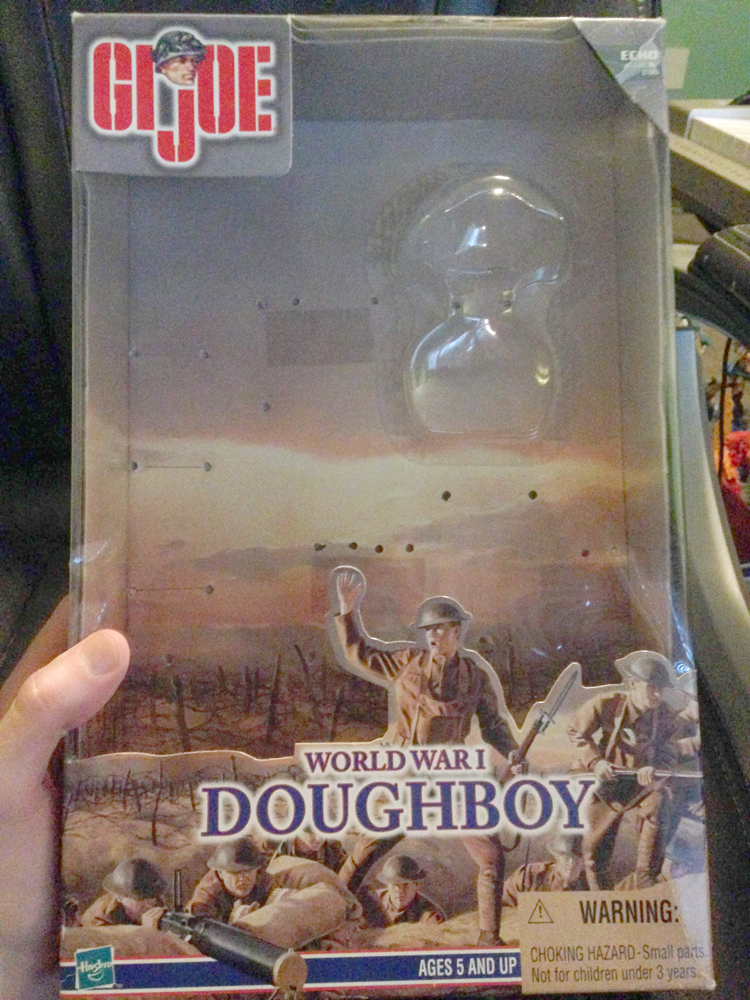 All right, and that just about covers the Doughboy. Not much else to show. One more thing actually I would like to mention, if you look at his pants, I really like that they come out like that. That’s really cool. Just thought I didn’t mention that. Looks great.

Anyway, hope you enjoyed the review guys. Like I said, this particular GI Joe is totally worth the buy. Very realistic and very cool. You will not be disappointed if you pick him up on Ebay or wherever. Yeah, I definitely recommend him and thanks for watching. I hope to do some more videos soon. See you later.