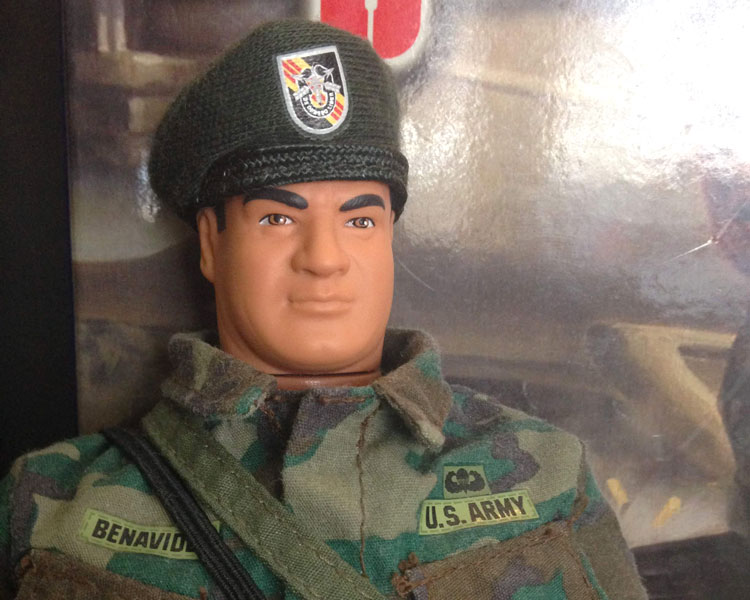 All right, so there he is. I guess I’ll show you his gun first. This is an AK-47. This is an enemy gun. The box specifies that this is an enemy gun he stole. Or not stole but was using against the enemies. One of their AK-47s. Pretty nice looking gun. Nice detailing. And that comes out. No painted bullet, unfortunately. The strap is a little loose on this. That might be just because of age, though. So it doesn’t really go over his shoulders very nicely. He does, however, come with another gun, and that is this big gun. Let me check the name of it. It is a M60 Machine Gun, and it does come with a nice long strand of ammo, so you can put this in his hand. Very big gun, but it’s pretty cool. 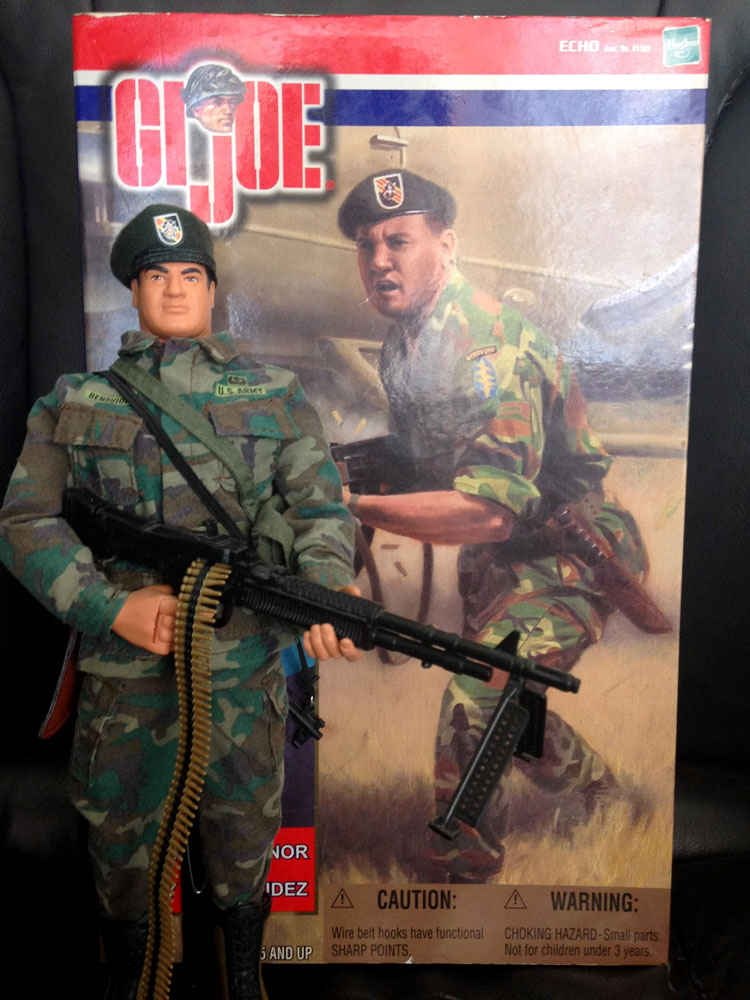 He does come with a few other accessories here. We have a radio. Very nice looking radio here. Attached we have some smoke grenades, maybe one’s a flash grenade as well. Those are cool. And this is very nice. Nice detailing on it. It’s very cool. So there’s that. And one other thing is this map with a clear overlay over it, so you can take that off and we have a map of South Vietnam, Cambodia. It’s pretty cool.

All right, let’s get onto the figure. Definitely cool figure, but there are a few things that I would like to mention about him. A few complaints. Actually just one major complaint, but other than that a very nice figure. Here he is. Very nice. There’s his face. I think that’s a pretty accurate sculpt of Roy Benavidez. I think it looks like him. As you can see comes with this green beret. Go ahead and take that off. Here it is. It’s a little hard to put this on because it naturally just wants to kind of pouf up and it just doesn’t look great. That’s not how it’s supposed to go. You’re supposed to kind of curve it over his head, like that. It takes a while to get it to stick, ’cause that’s how it’s supposed to be. Looks better that way anyway. 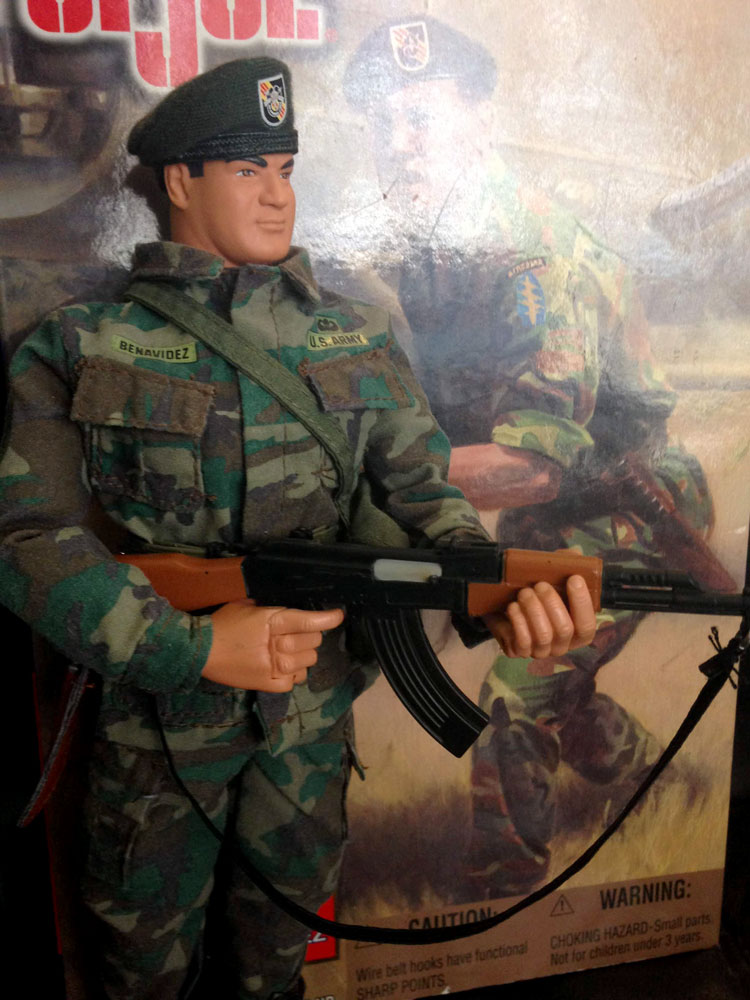 On there it does have a little symbol there. Not sure exactly what that means. I’m guessing some sort of ranking or some sort of platoon number or something. Anyway, there he is. If you haven’t noticed already, I don’t know if you can notice from the video, but his head, take a look at his head. They made this head sculpt a little too small for the body, so if you compare him to other G.I. Joe’s, his head is really tiny. It’s really small and round.

I mean, it’s a very realistic head sculpt. It looks good. It does. It’s just that it’s really small. And even if you take off his shirt and everything, you can just see that the head is too small for the body. I don’t know what happened there. I guess Hasbro made this sculpt and saw that it was too small and didn’t feel like fixing it. I don’t know. But I wish they’d made it a little bit bigger because it doesn’t quite look right when you compare him to other G.I. Joe figures. But that’s my major complaint with this figure. He’s really cool, don’t get me wrong, but that’s always bothered me. His head is just a little too small for his body. 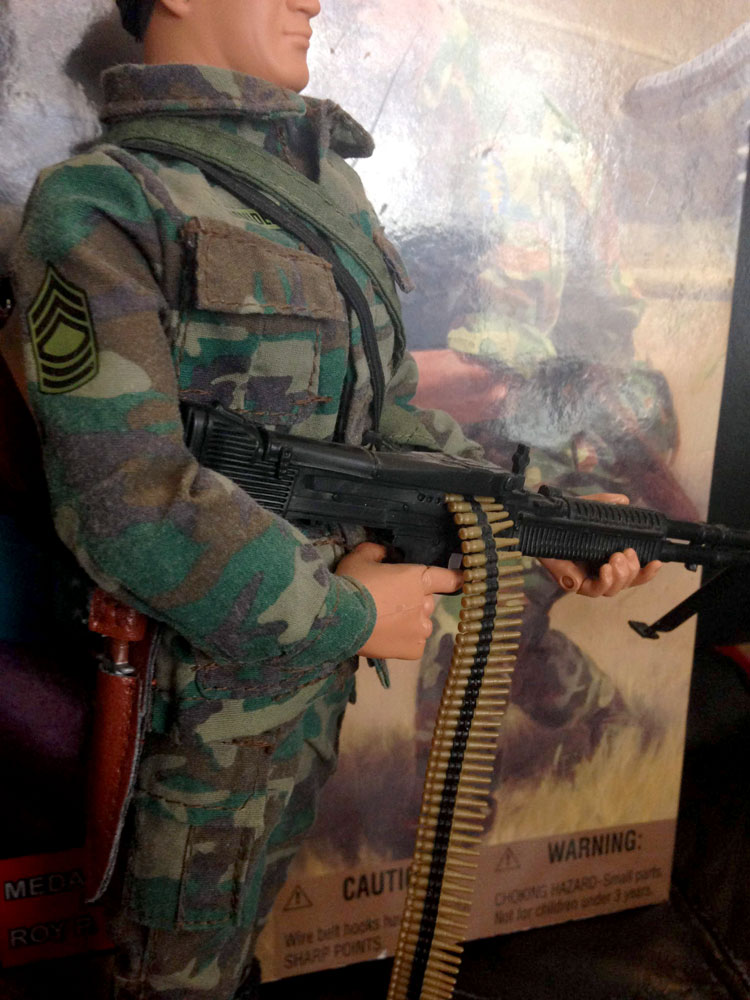 Anyway, moving on from that point, let me take off some more gear here. He does come with this medical bag. Don’t believe there’s anything in it. Yeah, there’s nothing actually in it. But it’s cool. It comes with a nice bag there. He does have a belt on. This is really cool here. We have a nice knife with a sheath. This is a really, really nice knife. You can see the silver paint, the browned handle there. Usually you don’t see knives like that. Usually they’re black or something, so this was a nice addition to the collection. It’s very nice. I was impressed with that. 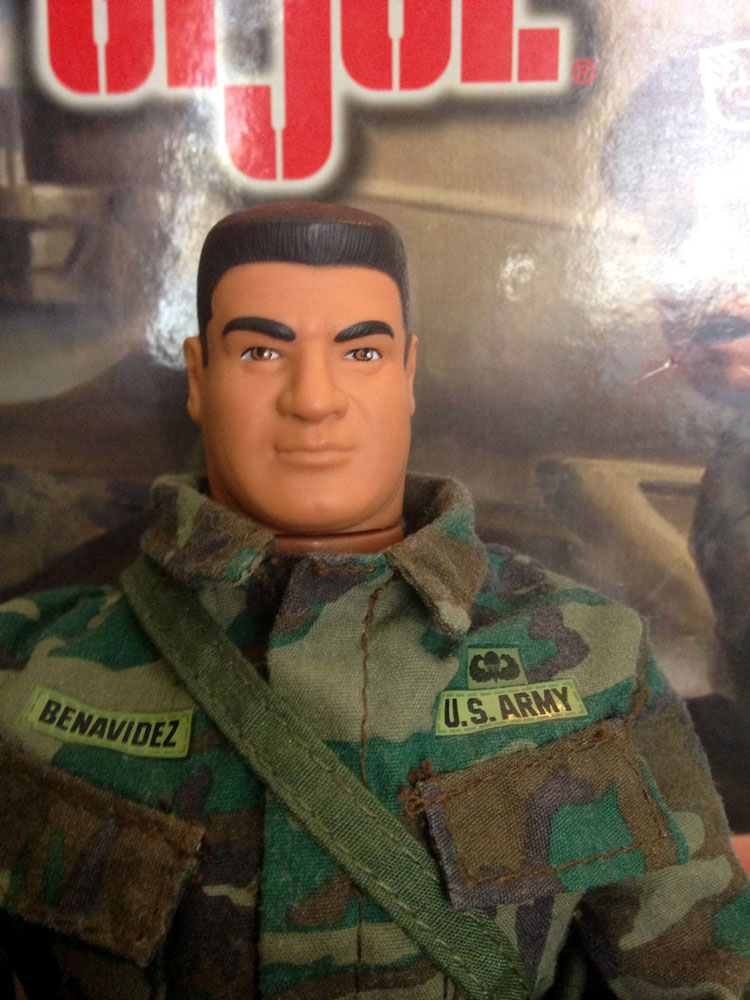 Take a look at this. This was around his neck. A really big chain here with a little tiny medal. That is … let me check again. It’s a St. Michael Medal, Patron Saint of Paratroopers. So he comes with this. I guess he wore that in real life. That’s pretty cool that they included that. All right, and there’s his basic uniform.

That’s pretty much it guys. Like I say, you can even tell from his uniform, just his collar, it’s way too big for him. It doesn’t really completely go around his head, just because his head is so small. But anyway, moving on from that point, that’s pretty much it, guys. That is Medal of Honor Recipient Roy P. Benavidez. Cool figure. I definitely recommend him. 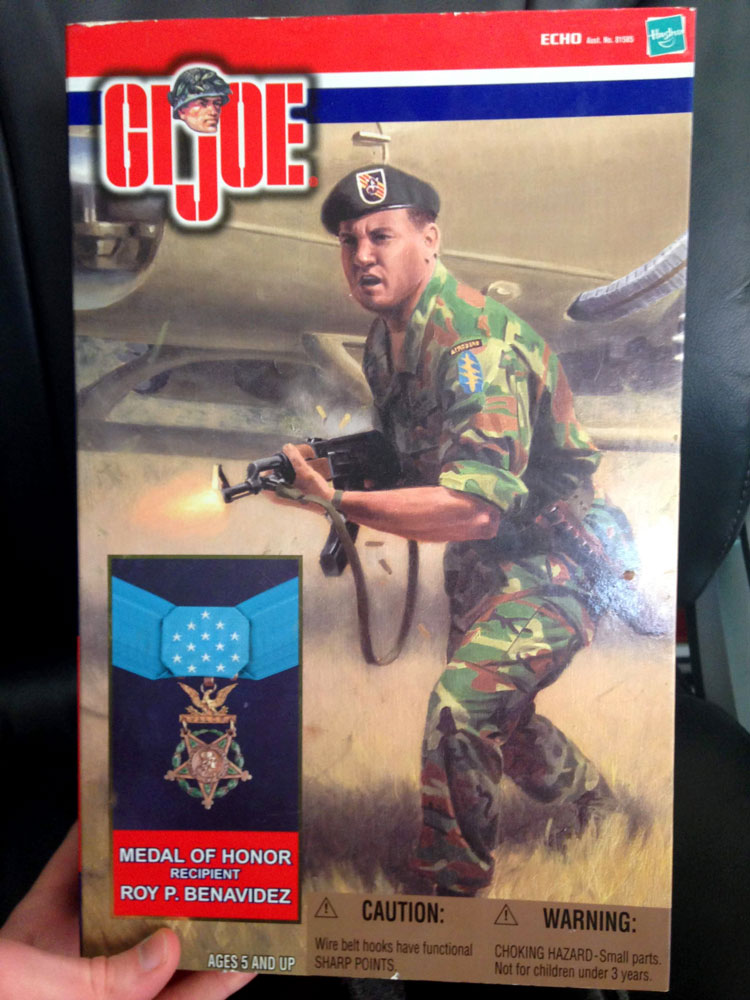