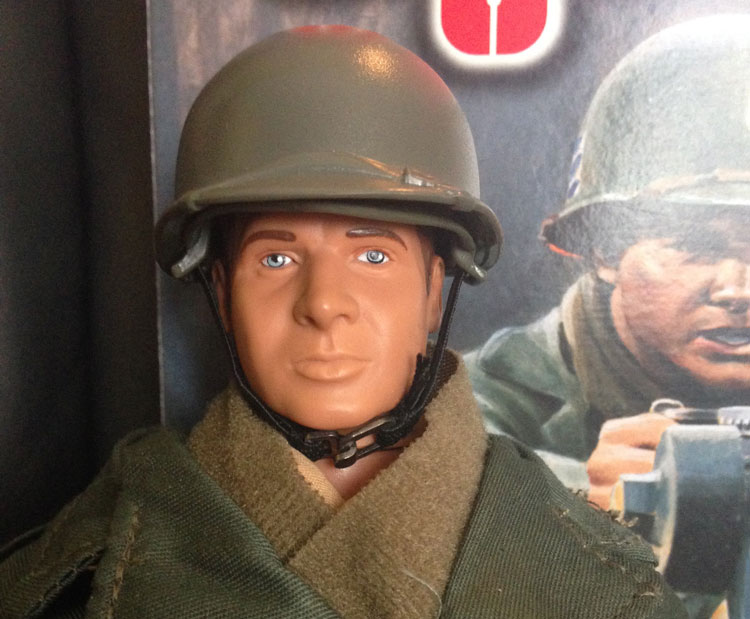 Hello guys, and welcome back to another review. Today I have a very cool GI Joe figure to show you. This is the Medal of Honor recipient, Audie Murphy. This guy is one of my favorites. He’s very nice. And I’m so glad that I was able to pick him up a few years ago. And I think you’re really gonna like him.

So let’s get started. I will show you the box first. A very nice box here. Really like that picture of Murphy there, that’s very cool. Of course we got the picture of the Medal of Honor there. He’s part of the Echo Collection by the way. Up on top, we have equipment list. We got some pictures of the figure. Okay, on the back, another picture. Same picture, just kind of farther away. We got Roy Benavidez there, I’ve already done a review of him, a very nice figure as well. 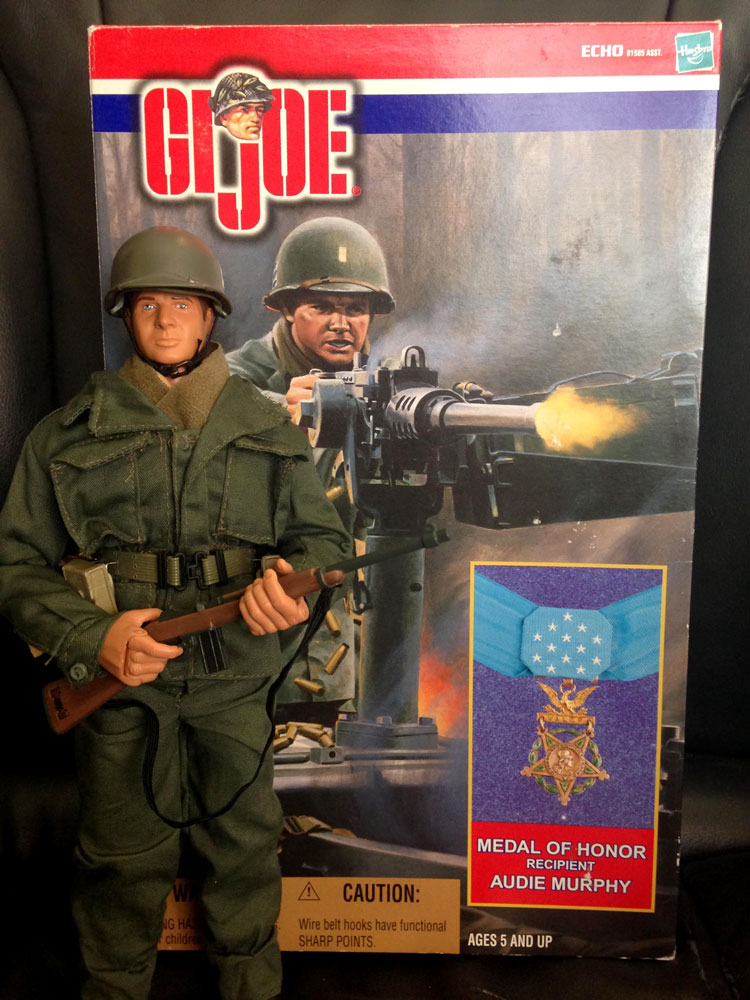 Now here is the figure. Looks great in his outfit, really cool. Got some nice equipment pieces here, a lot of great details. Overall a fantastic figure.

All right, the first thing I wanna show you is this massive gun that he comes with. This is supposed to be a representation of the tank machine gun that apparently he mounted. It was a German tank actually that he mounted. So this is supposed to be a representation of that. Pretty iconic there. So that’s very, very nice. It looks great. I love this really cool strand of bullets here, massive bullets. That’s really nice. We’ve got a nice range. And that’s pretty much it for this. This can be bent up and down. 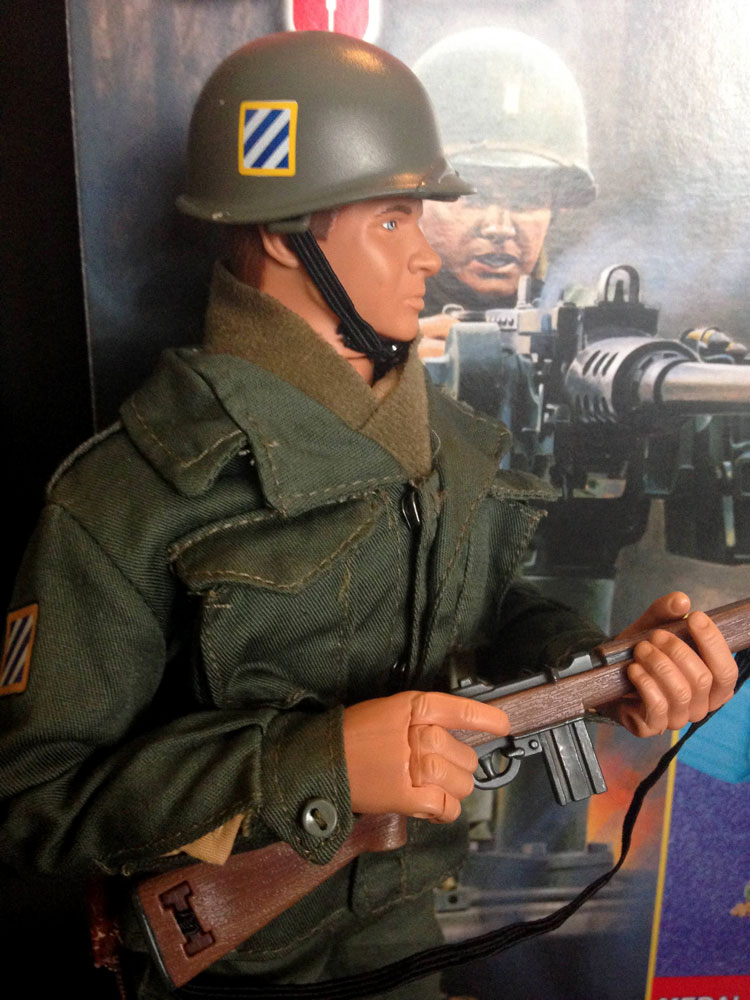 Let me go ahead and try to pose the figure with this gun. Okay, I’ll try to make him sit down just like this. Of course there’s not really any tank, so that makes it a little hard. You kinda have to use your imagination on this one, but still looks pretty cool like that. So there he is. It’s very nice. All right, so there’s his big tank gun, pretty sweet.

Now let’s go on to the actual figure. Go ahead and take his weapon off, his other weapon, which is of course this nice rifle here. I believe that’s a carbine. I could be wrong on that though. Let me check. Yep, M1 carbine. So that’s a pretty nice looking gun there. Got a nice strap. Of course you saw it strapped around his back, that looked very nice. The clip does come out. We have a painted bullet. And that’s pretty much it for the gun. It’s a pretty simple gun, but it looks very nice. I really like World War II weapons, so it’s nice to have that in my collection. Here is the figure posing with the carbine. There we go. Very, very cool. All right, so there’s his gun there. 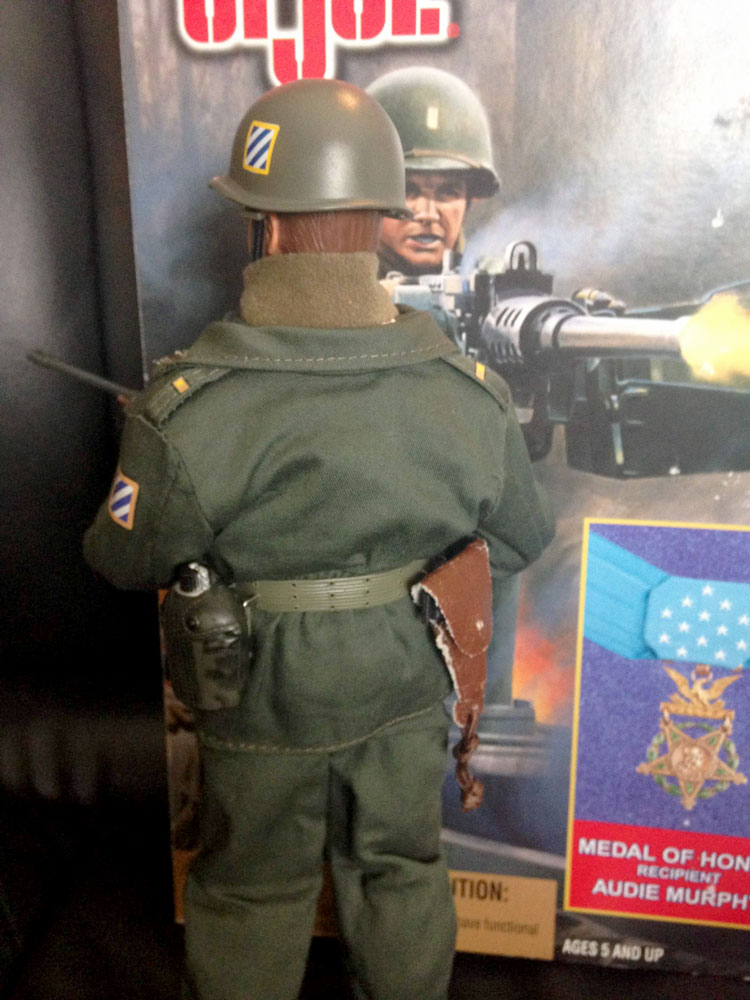 Next I’ll show you a closeup of his face with his World War II helmet. So there’s the helmet. Really cool helmet. I love this symbol here, I guess that’s maybe part of his group that he was with, their symbol or something. That looks really nice. The only thing I wish they did, as you can see on the box here, they have another little marking there at the top of the helmet, I wish they added that. And I wish they painted in that little strap there. But that’s it. It’s still very nice though. I really like that.

Okay, next I’ll go ahead and start taking off some of his equipment off his belt here. He does come with a pistol there. It looks like a Colt. Got a magazine, and of course the pullback action. There he is holding it. That’s very nice.

All right. Overall I just wanna say I really like his uniform. It looks very distinct from all of my other World War II figures. It just looks really, really cool. I can’t stress that enough. Very nice. 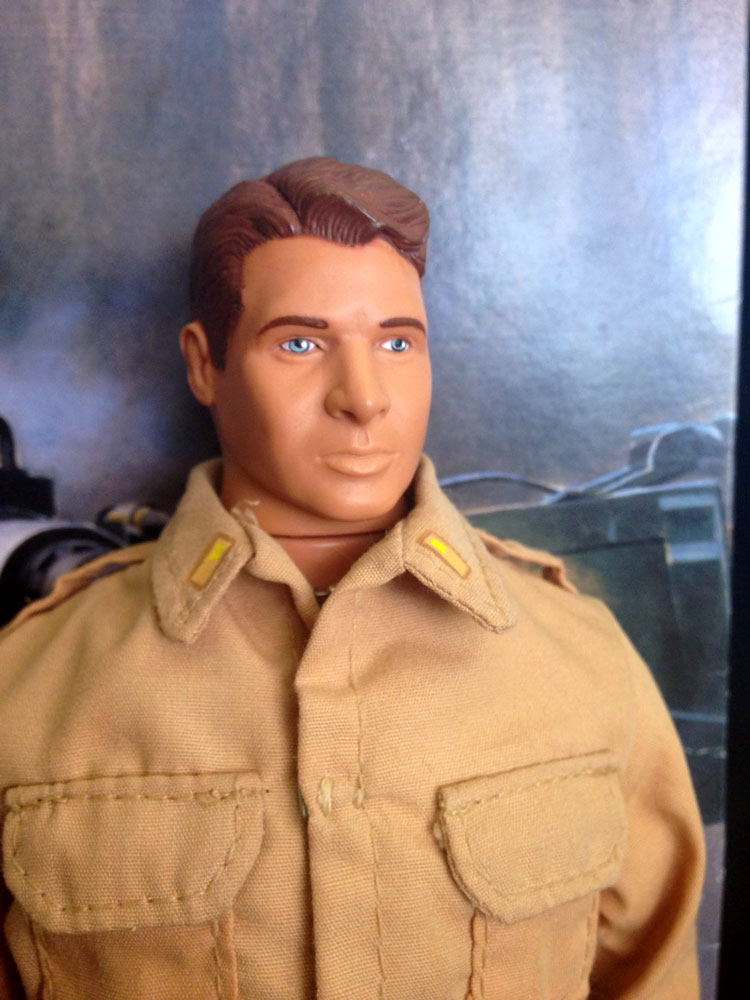 Okay, it does come with a canteen and a nice pistol holster there. This one though is kind of falling apart. I guess that’s just because of the age of the figure. I got him like that. And he was brand new, but yeah, the holster is a little kinda falling apart there. Oh well, I just have to be careful with that. He also does have these nice ammo pouches there. That’s very nice.

So let me go ahead and take this belt off. There we go. And take a look at this coat he’s got on. Once again you see that familiar symbol there on both sides. He’s got some other markings there on the shoulders there. And some nice big pockets there for you to stuff I guess ammo clips in or something.

All right guys, so that is Audie Murphy. I think that’s how you pronounce his name, Audie. I don’t know how else you would say it. So there he is, Medal of Honor recipient Audie Murphy. As I said, very nice figure. I was very impressed and pleased with him when I got him. Hasbro put a lot of work into him, and he just looks really nice on display. So highly, highly recommend. And if you can find him for a good price, he can be pretty rare and can be pretty pricey. I paid maybe 45 or 50 dollars for him. So he’s a little hard to find and can be kind of expensive, but definitely worth it, very nice figure. All right, thanks for watching the video, guys. Hope you enjoyed this review, and I’ll be doing some more soon. 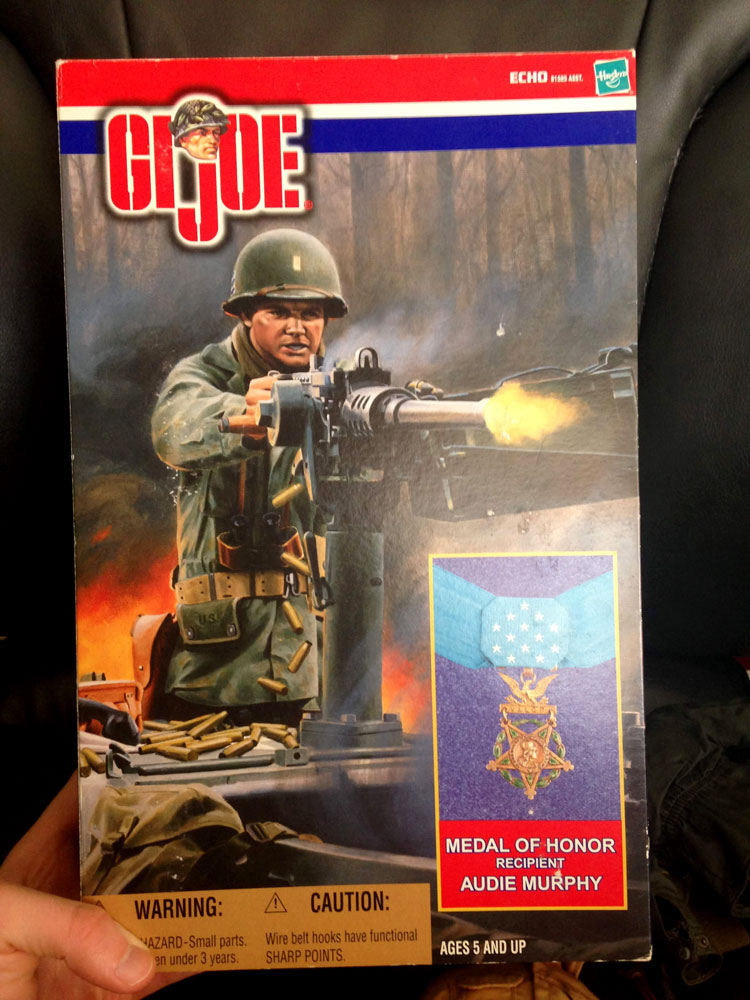