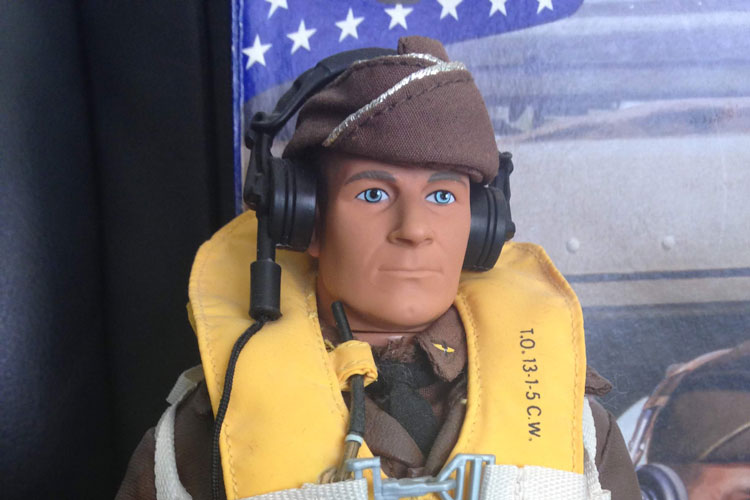 Hey everyone and welcome back to one of my GI Joe reviews. Today I’m going to be reviewing GI Joe Medal of Honor Recipient Jimmy Doolittle. Let’s get started here, this is a pretty neat GI Joe.

Unfortunately, when I got him, I got him off eBay for around $22, which is actually really good but there was a reason why and that was because of the box. As you can see it’s very messed up, it’s very dented. It’s kind of hard if you want to store him away, everything is kind of messed up here. For collectors like me, I like to keep the boxes to these guys because they’re very nice, so that was kind of a bummer but I just wanted to get him.

Anyway, here’s the box, got some nice artwork of him and this box opens up and we get a nice long story of Jimmy Doolittle. There’s the box. Here we have a picture of him in his gear, his equipment list, and on the back we have some advertisements for other Joe’s. We got the Marine Raider, who I have. We have the Vietnam Door Gunner, who I also have. Urban Camo, I don’t have him. And Navy Seal Take Down Team, which I also do not have. 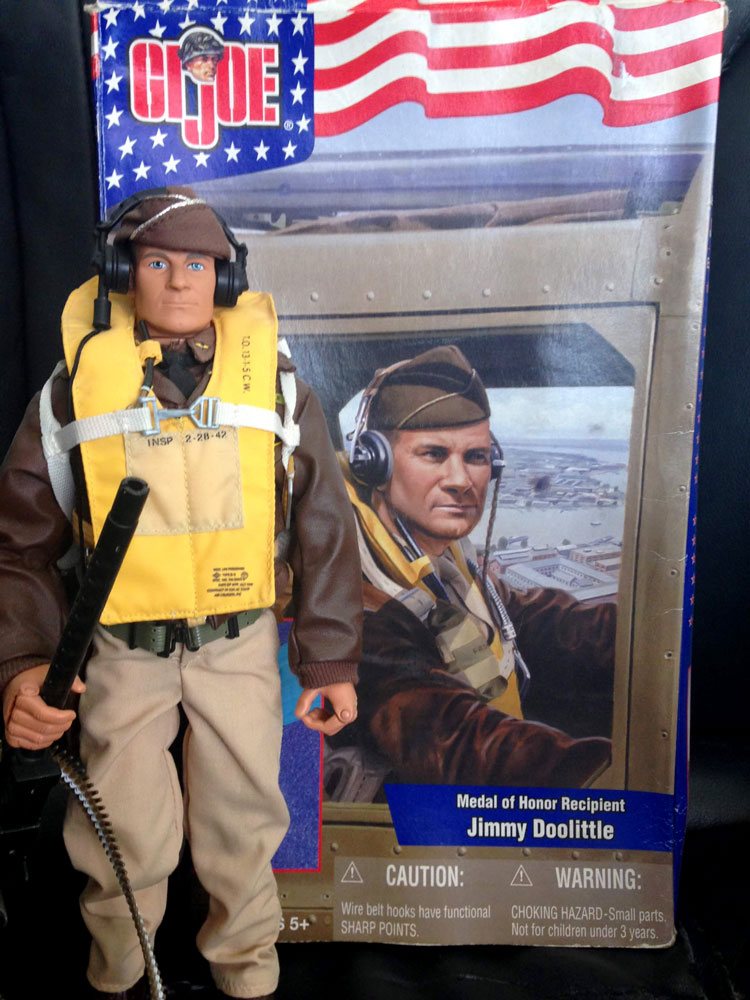 This Joe came out in 2001. He’s sort of part of … There’s a D-Day collection, which is almost a World War II figures, I have pretty much all of them. Even though it doesn’t say he’s part of this collection, I kind of lump him into it because I mean the box looks like it’s from the collection and he just kind of matches it. Anyway, that was just a side note if you even care.

Alright, let’s get started with the figure. Like I said, a very nice one. They did a good job, Hasbro did a good job with this one. Here is the gun, it is a … Let me see. I always forget the name of this, 30 caliber machine gun. Obviously, this one, it’s supposed to be on a plane so there it is, some nice detailing as you can see, if you can see that. We got some paint there to make it look more metal, more realistic. That’s very nice, and we do have a long strip of bullets, which can be attached. I usually just put it right inside of there, kind of just squeeze it in so it stays there. Alright, so there is his gun. 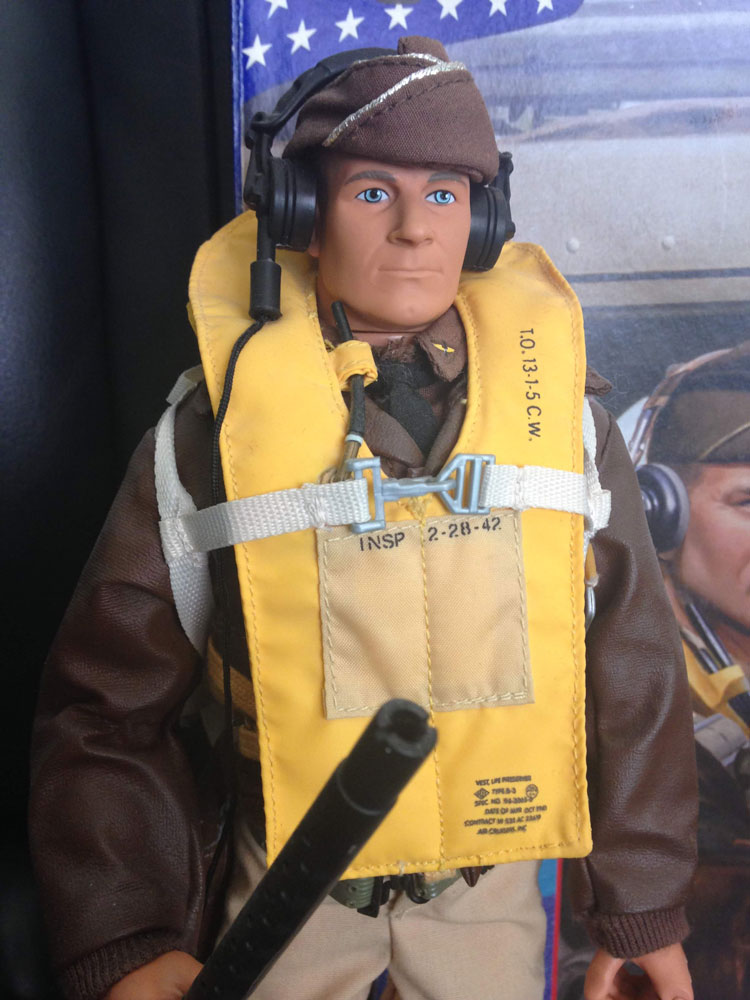 Now let’s get to the actual figure. Here he is all geared up in his outfit, parachuting outfit or what he would’ve worn while riding his bomber plane while on his raid. Looks very nice. They did a very good job with his outfit, so let’s start taking off his gear here. We have a set of communication headphones and his hat. There it is. Oops sorry, there it is. Looks pretty good on him. It does kind of fall off unfortunately, you got to … Kind of slides right off since his hair is thin. It kind of slides off so you just got to push it on.

Alright, so I’m going to take off his life jacket here and his parachute as well, so you can take a look at that nifty looking leather jacket he’s got on. He does come with a parachuting thing here with a whole bunch of straps and of course he comes with a life jacket or a life vest. There that is. I love the feeling of this. Obviously, you can’t feel it but it just feels very realistic. I like that. 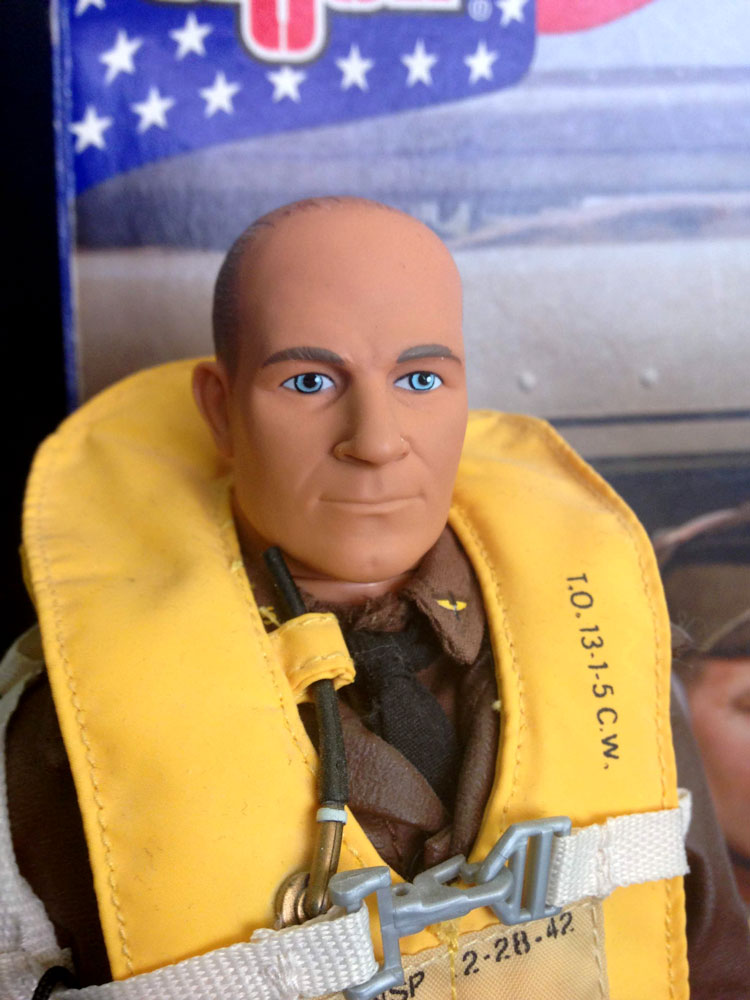 Can you see at his side he does have a holster with a typical World War II GI Joe pistol in it. Kind of bland looking. Fortunately, pretty much all the World War II figures come with this pistol. It’s nice but after a while it gets kind of old and tiring come seeing this gun. I wish they did some more variety with their pistols but oh well. 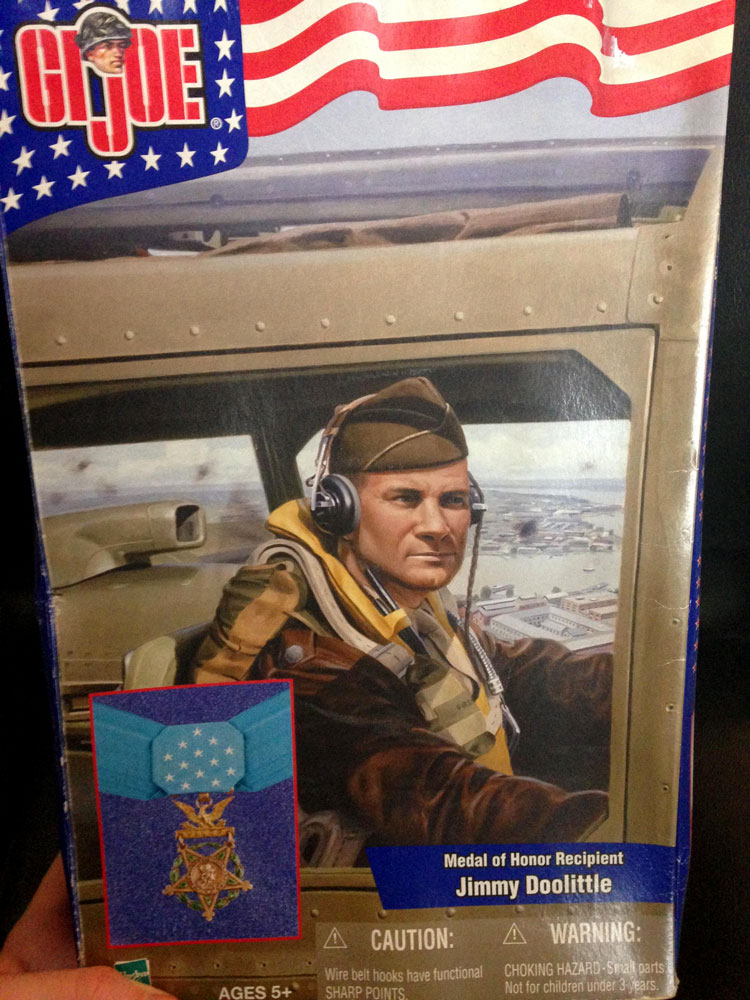 Okay, here he is without the leather jacket and still he looks really good. They did a lot of work with his outfit, a lot of layers of clothing here. He has a nice brown shirt here. We have some designs over here and which is really cool is we have a tie. Don’t see that very often. That’s pretty nice.

Okay, and we have some nice khaki pants here and his boots. Here we go, here are his boots. They look very muddy and if you watch my MacArthur GI Joe review, you saw that MacArthur had black socks. Well, here we go and Jimmy Doolittle also has some socks, which is very nice because I personally love getting socks. It makes it very realistic and it looks great with the shoes if you lift up the pant leg.

I noticed with a lot of the real … Like the Medal of Honor recipients, they included more detailed clothing items and more like socks and stuff like that, which I thought was kind of neat. Anyway, so there he is. There is Medal of Honor recipient Jimmy Doolittle. I think Hasbro did a good job with him. It looks pretty much like him. Yeah, hope you enjoyed the video, guys and hopefully I will be making some more soon of some other GI Joes that I own. Thanks.