Welcome back to another review. Today, I have an awesome U.S. Dragon figure to show you. This is Tom Grieger, a U.S. Army platoon sergeant, and this figure was released in 2007. Guys, this is a very rare Dragon figure, very hard to find. I got him last week; very fierce bidding war, but I ended up winning the auction. I got him for $80. I mean, that’s expensive, but in my opinion, is worth it. This figure is really coo. I’ve been wanting him for a few months now. I was willing to pay a good price for him and I’m glad I got him. He’s super cool. Let’s get started. I’ll show you the box. A very cool box. Got an awesome picture of the figure there. 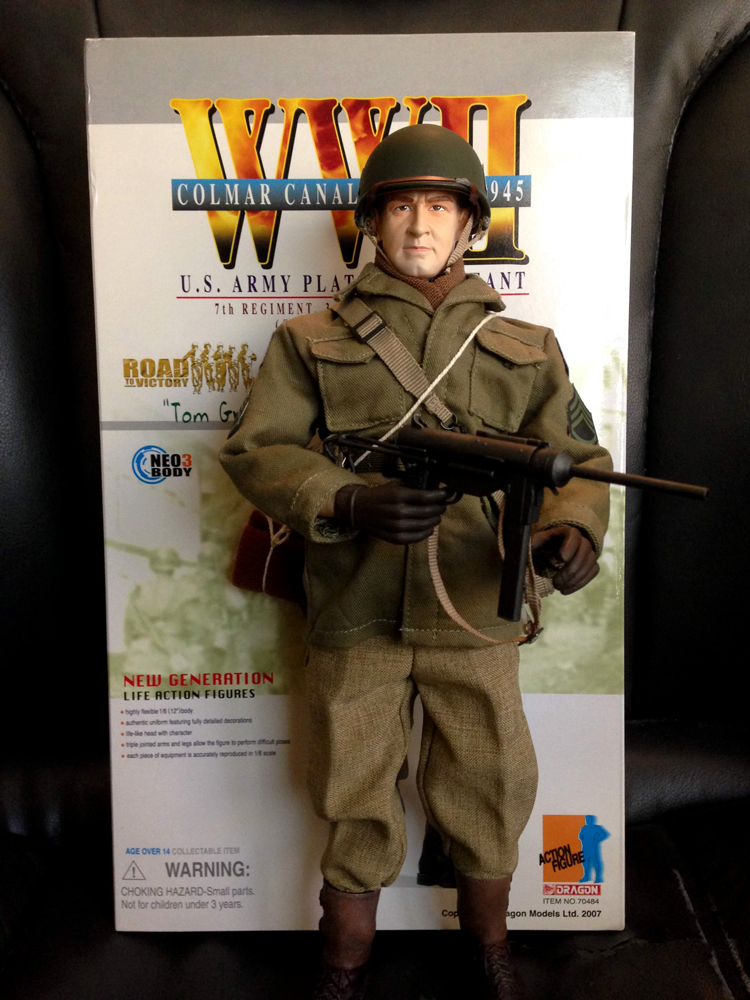 WW2, Colmar Canal, Alsace 1945. This guy’s a staff sergeant. Here’s the back of the box. And the top is another cool pose of the figure. Alright, so awesome box. I love the picture of the figure. I think that looks great. Alright, here he is. Let me get that in focus for you and let’s take a look at this guy. Alright, this is a beautiful U.S. Dragon figure. I think they did a phenomenal job with this one. The detail is great. It’s one of their later models so the detail is fantastic and just, overall, everything looks really good, I think. I love the U.S. figures and this guy, I’ve just been wanting him for so long. But, definitely worth the wait. This guy’s awesome. 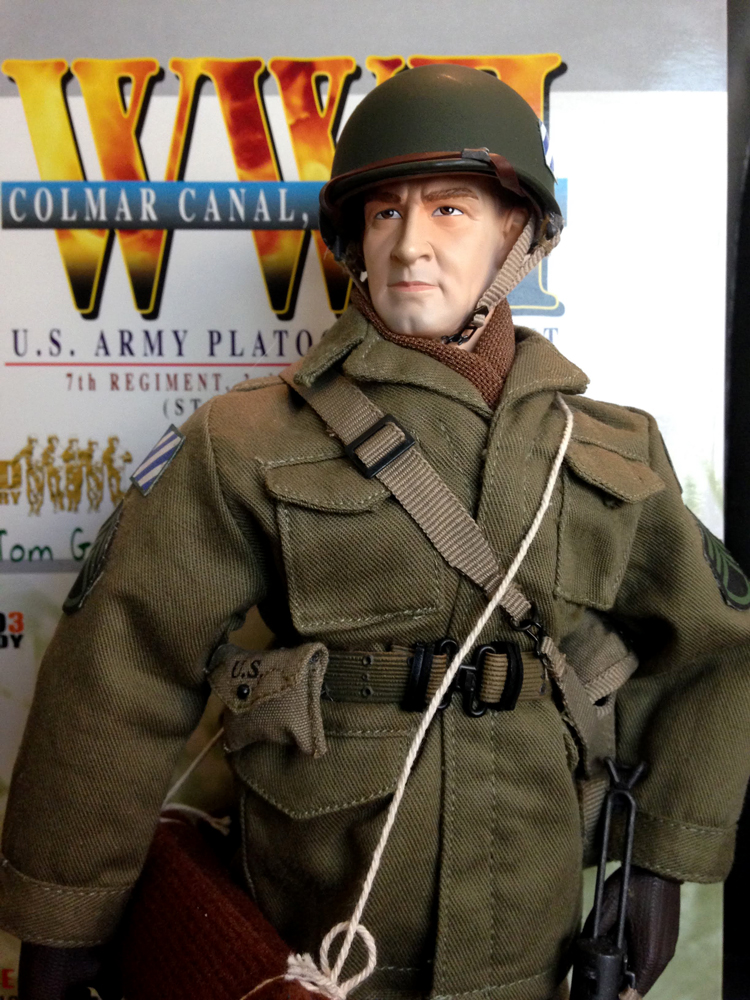 I’m so happy to finally have him. Alright, so in his hand he’s got … it’s called an M3, so a machine gun, nicknamed “The Grease Gun” and a very interesting weapon. It’s pretty cool though, and he holds it well. Alright, here it is up close. There’s the magazine. We’ve got a strap on this side. This can open up. Nice detail. Also, the stock can be pushed in and pulled out. Good quality weapon, very cool, very unique weapon. Alright, and the figure comes with a few little accessories. It comes with two cigarettes and also a cigarette box. That’s really cool. Of course, you can put that in between fingers and get a pretty cool pose there. That looks really good.

All right, I think one of the coolest parts about this figure is his helmet and the head sculpt is also really nice. This helmet, in particular, is beautiful. It’s a metal helmet and that makes it 10 times cooler. They have these stickers that you can glue on; one on the back, two on the sides. Very nice. Just overall, the quality of this helmet is great. It feels really heavy. I just love the way it looks with those stickers on the side. That’s for his platoon, I guess, the insignia for his platoon. Here’s his head sculpt; very nice head sculpt, very nice and detailed. One thing I did notice is on the box, just a little minor detail if you care, but on the box in the picture the guy has blue eyes it looks like, but here’s he’s got brown eyes.

Just something I thought I’d point out, if you care. Anyways, still an awesome head sculpt. Very nice. Okay, so moving on. On his belt we have a pouch over there. We have another large pouch here. Inside of this I have his bayonet or knife. I was having a hard time getting that onto the belt so I just stuck it in there. That’s very cool. Also, around his shoulders, this is called a GI hobo blanket roll. Let me take that off. Okay, so good quality piece of equipment here. Let me go ahead and take this off as well. Alright, inside of here we have five extra mags for his grease gun. Also, very nice quality. On the back, he has a canteen here. Alright, I’m going to take off his belt so we can get a better look at his field jacket. Give me a moment. 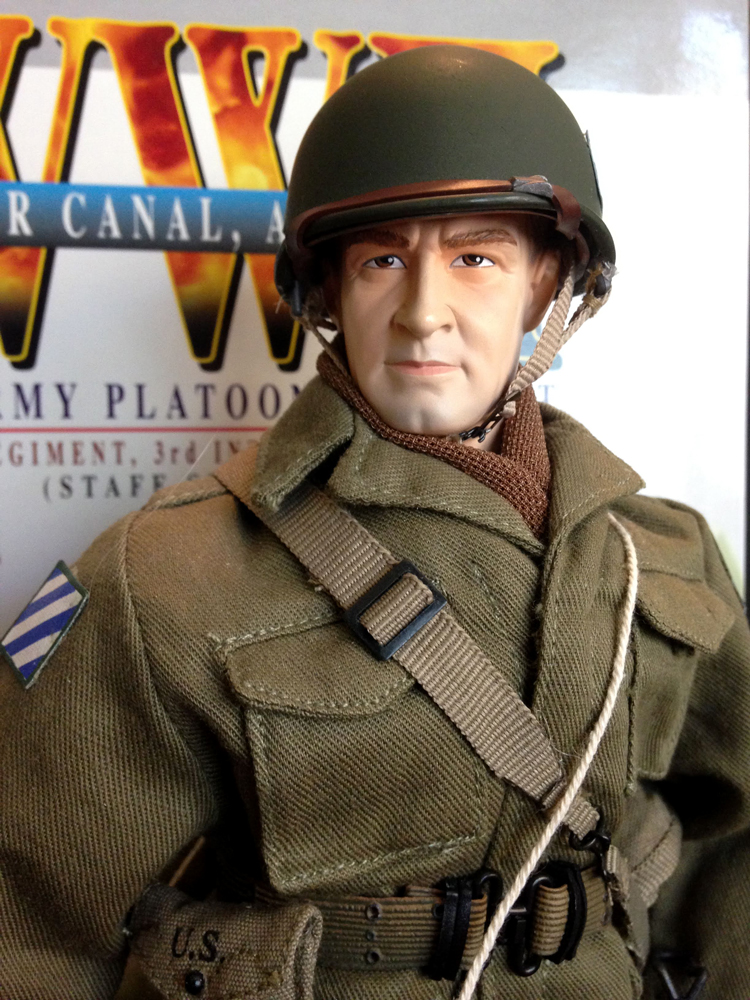 So here is his jacket. Also, very nice quality. It looks fantastic. Once more, we have these stickers that you can put on, his staff sergeant emblem, and also his regiment insignia. I love the way that looks. Really beautiful. Okay, and underneath this we have a scarf and then his inner uniform and there’s some more stickers you can put on for his staff sergeant stickers. Then, we’ve got his good quality pants and also his boots are really nice. I think those look fantastic, very realistic. Also, the last thing is you notice he has gloved hands and those are also really nice. I really like the gloved hands. I think they’re pretty cool. 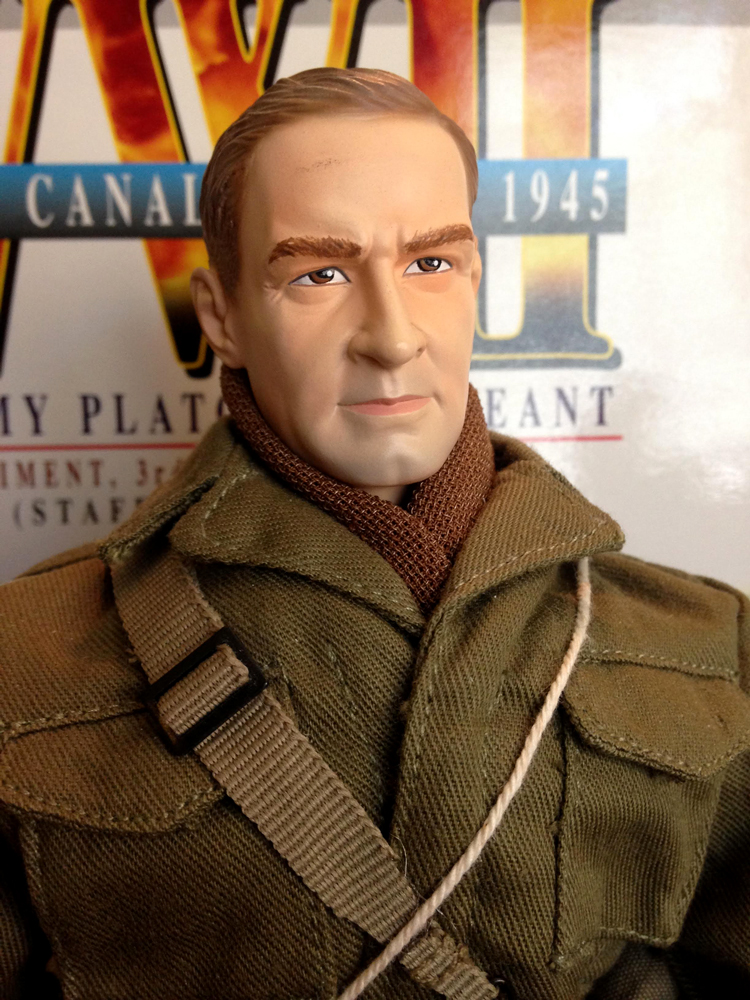 I think that’s everything to show, guys. That is Tom Grieger, really a fantastic U.S. Dragon figure. I think they put a lot of love into this one. You can really tell. Really awesome equipment. Like I said, the helmet is one of my favorite parts, really good quality. I love how heavy that feels compared to the plastic ones that are included with the older Dragon figures. Also, grease gun, really nice. Just overall, this is a beautiful figure. Guys, if you can find this guy, I really recommend picking him up. Great figure and I’m very happy to finally have this one. Thanks for watching, guys, and I will see you next time. 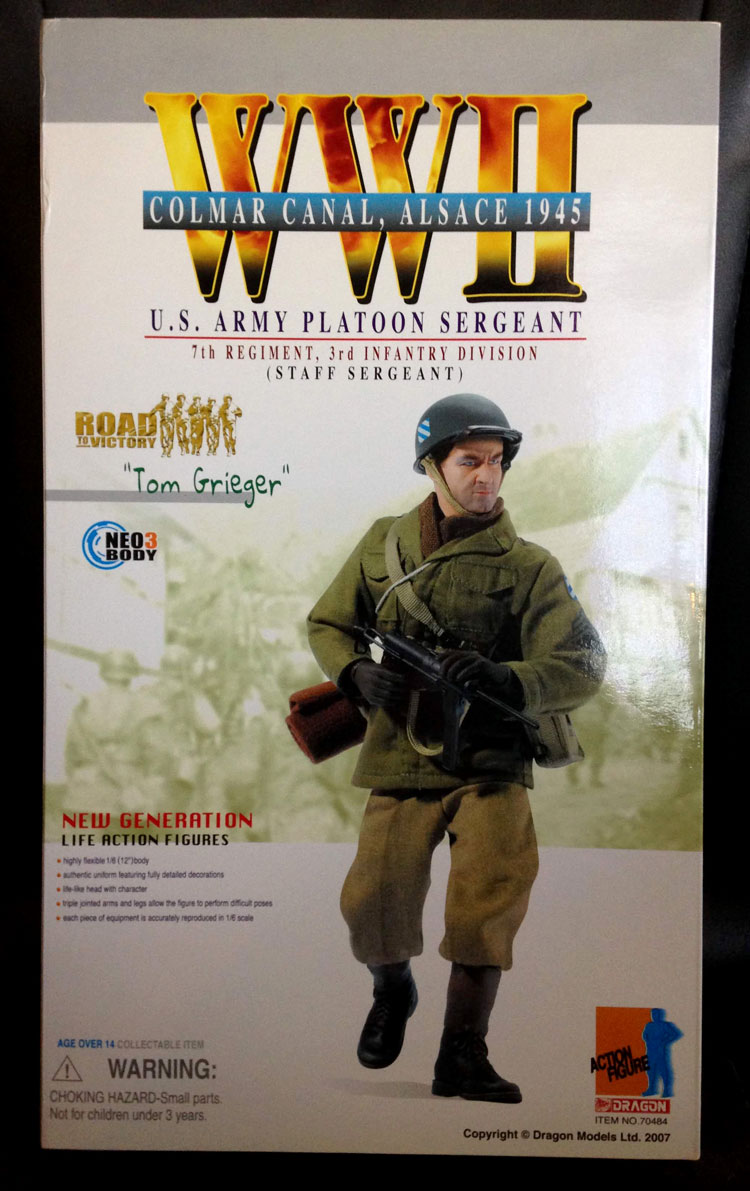 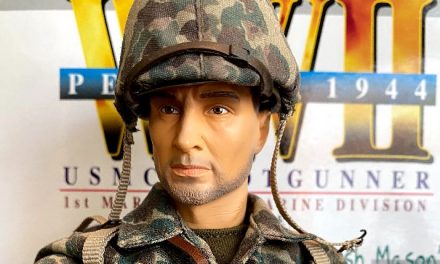