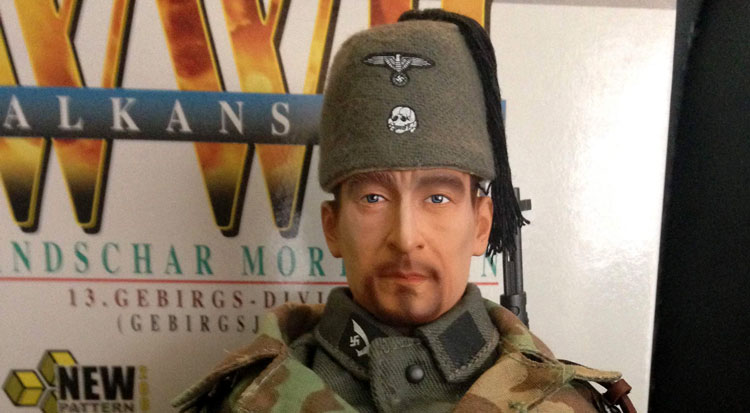 Hey guys, welcome back. Today I have a very nice Dragon figure to show you. This is Hasan Malnar. He is a Handschar mortarman, part of the 13th Mountain Division, which was actually a Croatian division, and that mainly consisted of Bosnians and some Croatians as well. But apparently mainly Bosnians. But this is what the figure looks like, very nice, and I previously didn’t know anything about these guys, so I did do some research on the division. 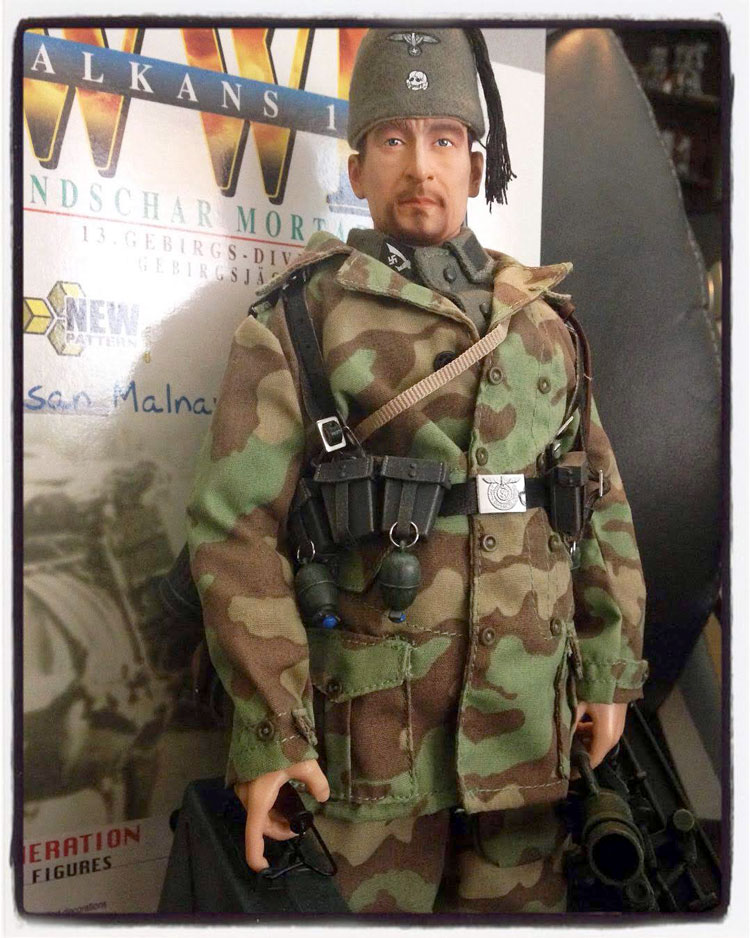 And apparently, these guys gained quite a reputation for being very brutal towards specific people groups. So it was pretty sad to read about what happened, or what these guys did, but I’m just a collector, obviously I’m not supporting any of that by purchasing this figure. Just wanted to put that out there, just in case. This is all for historical purposes. But this is a great representation of what these soldiers looked like in their uniforms. 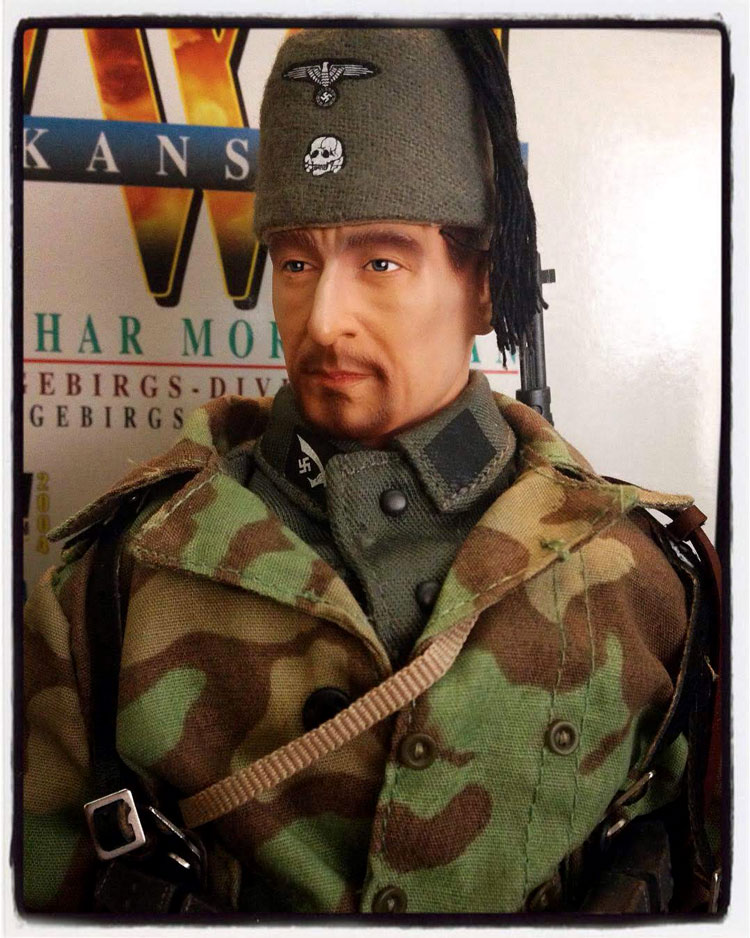 This figure was released in 2005. And inside, I did leave some stuff in here, he came with some medals that you can put on, but I’m pretty sure that all went underneath his coat, so I didn’t bother putting them on. But you can kind of see them there. All right, let’s show you the figure now. I’ve been trying to get this guy for a good while. He’s very rare. I picked him up for $80 off eBay, so pretty expensive but definitely worth it. This is a very realistic figure, and just comes loaded with equipment. Just tons of equipment. 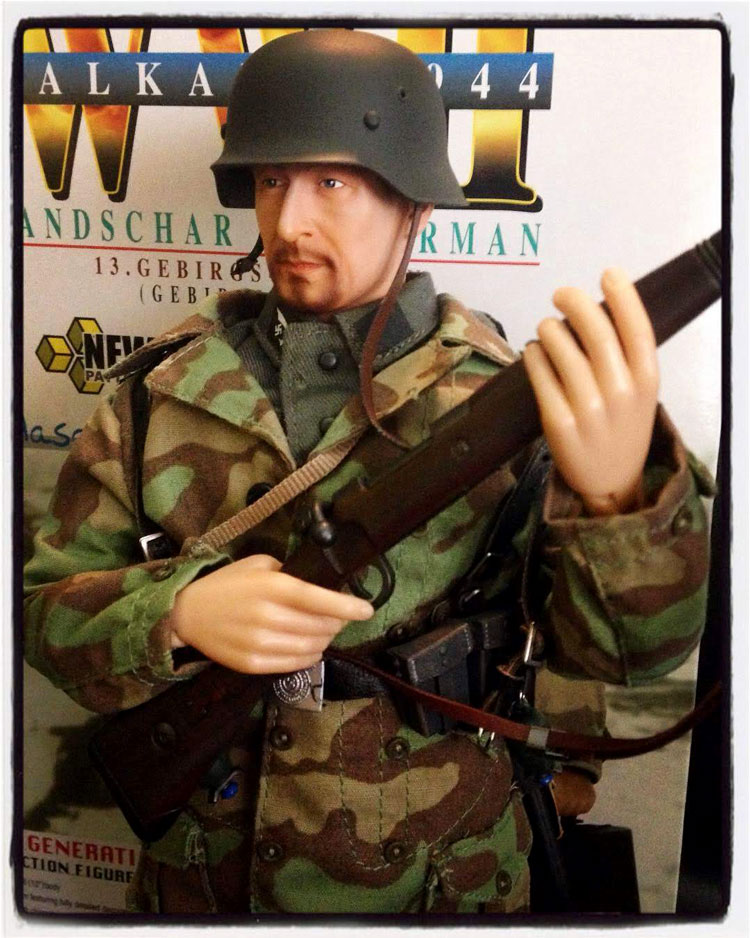 You can see his belt is just crowded with all this stuff, I had a hard time just fitting all this onto his belt, but it looks great. Like I said, really a great representation of what these uniforms looked like, very nice. Okay, so you can see he’s holding his mortar here, and I’ll go ahead and show you that. Okay, so this is pretty cool. And you can adjust it, if you want, so very nice. And then in his other hand, he has this case here, and in here are his … the bombs for his mortar, that you can actually take some of these out. These ones were already in there, but these can actually come out. All right, so very nice ammunition case there. 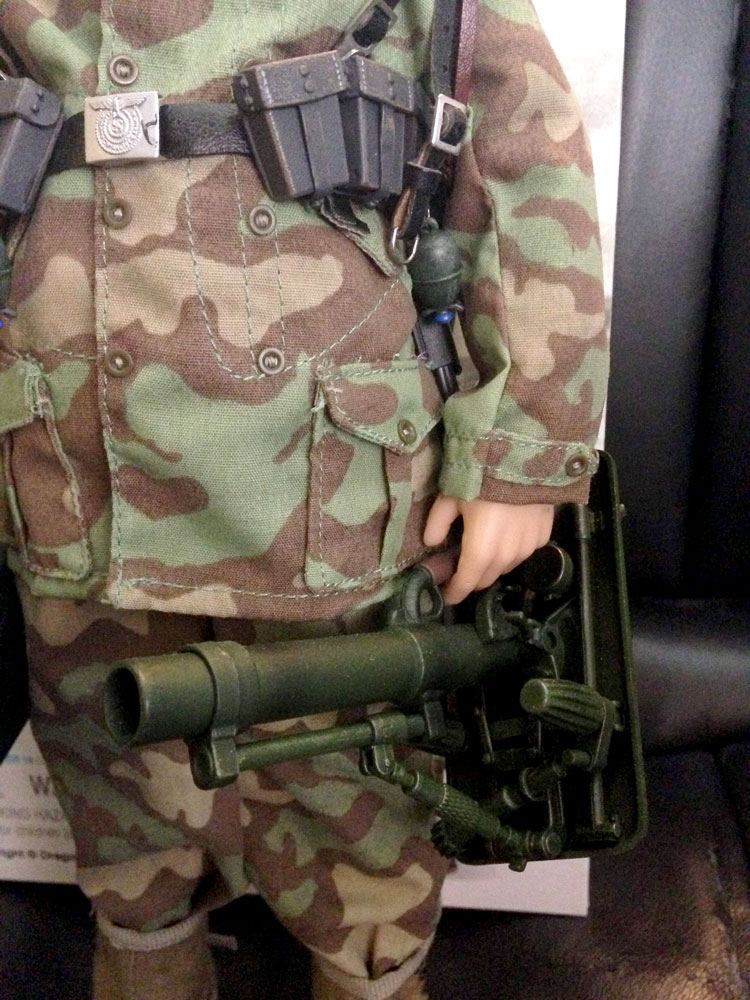 All right, he also comes with a rifle, which is really nice. All right. Next up, let’s take a look at his fez that he’s got on. So here that is, it looks very nice, and it fits very nicely on his head. And he does come with a helmet, as well. And it’s one of the metal helmets, so really nice, great detail, and that fits very nicely on his head as well. All right, there’s the head sculpt, very nice. Looks great, and you can see he’s got a beard going on there. So very realistic, I think that looks good. 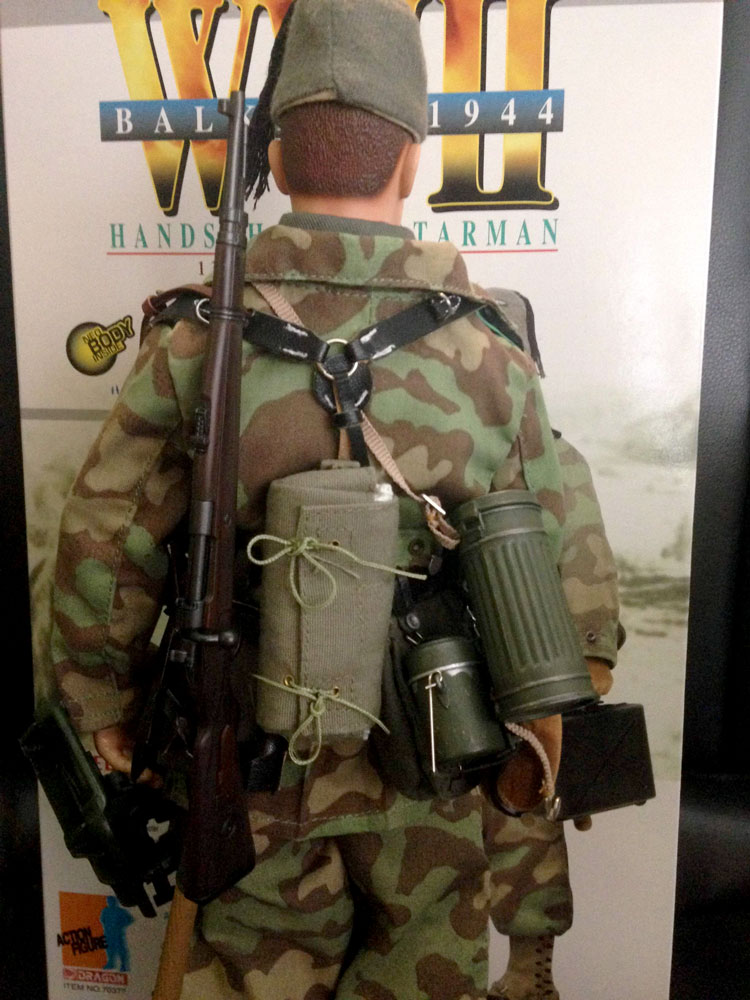 All right, so moving onto some more of his equipment, like I said, this guy comes with a ton of stuff. Up front we have some ammunition pouches. You see, he’s got three grenades hanging off of those pouches, which is a little tricky to do, you have to be careful. You can see I already broke on of these, those little tabs do pop off really easily. In the back, see he’s got his knife, got his shovel with a nice leather cover for that. Okay, we’ve got this, which I’m not entirely sure what that would be called. You’ve got some of the basic stuff here, it’s a nice looking canteen, and then he’s got his gas mask canister. Okay, obviously the harness and the belt, and you also got some nice shoulder pads here, I like the green edge on there. It looks good. And also, he came with this and I’m not entirely sure what this is. I know you guys will probably tell me what it is, as always. 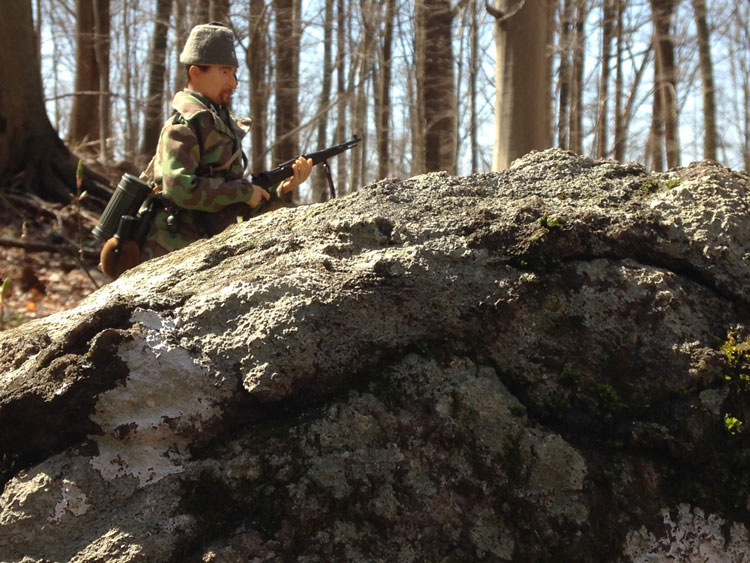 But yeah, really have no idea what that is. He also comes with this sticker sheet, he comes with a ton of extra stickers here, I haven’t put any of them on, just loads of stuff here. All right, as for his, this coat that he’s got on, I think this looks really good. I love the camo design on that. I think that looks great. And it’s the same for his pants, looks very nice. And underneath of this, I just want to show you really quickly. He’s got some interesting stickers, that are already put on for you, which is nice. 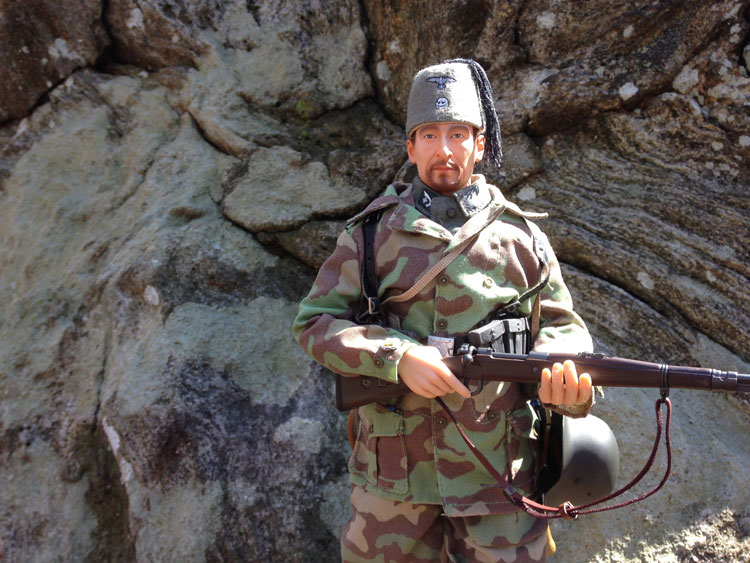 All right, there is one. I really like how that one looks. You’ve got the Croatian … part of the Croatian flag there. I think that looks really cool. Then on this side, let me see if I can do this without tearing everything off. There it is, got another sticker which, I guess this was their division symbol or something like that, but that’s really cool. And then also up here, we’ve got some more stickers that you don’t have to put on. Okay, so like I said, cool pants. And then also, these are called Styrian Gators, as you can see, I haven’t fully finished tying them together. It’s kind of a pain to do, I was having a little trouble. But I think these look great. They’re really cool. And the boots that he comes with are very realistic. You see at the bottom, that’s really nice, and even has laces on these. You can kind of see the bottom of that, that you can tie. 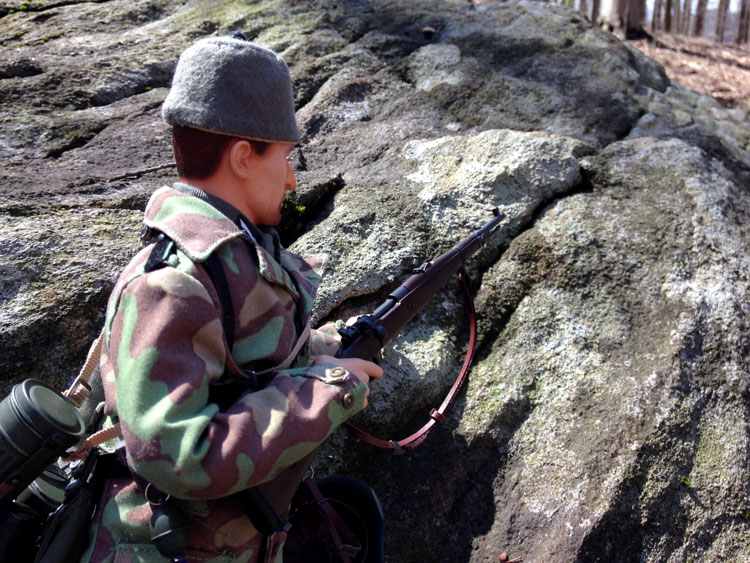 So in conclusion, an excellent figure. They really paid attention to all the little details for this figure. So I think that’s why he’s so expensive. But I think that’s everything to show. This is really a great representation of what these soldiers looked like, so I highly recommend picking this one up, if you can find him for a decent price. I think there’s still one on eBay going for like, $80 if you’re interested. Thanks for watching the video guys, I do have two more Dragon figures to review, and I’ll be doing that within the next week, so I’ll see you then. 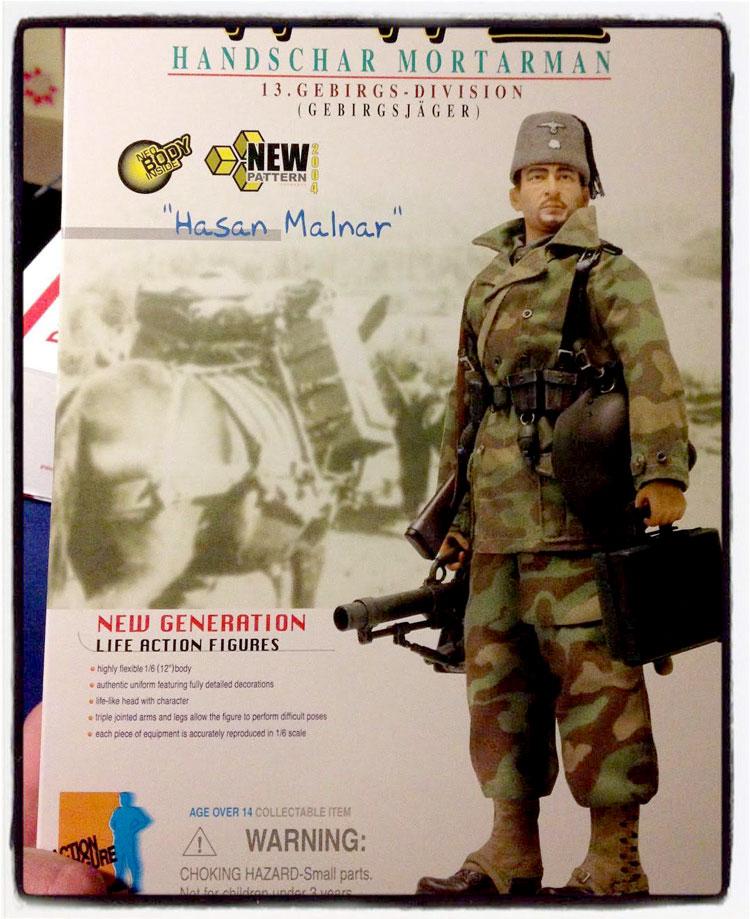 Here’s the 2021 update of my collection. Hope yo

Some of my Fallschirmjager figures 😄