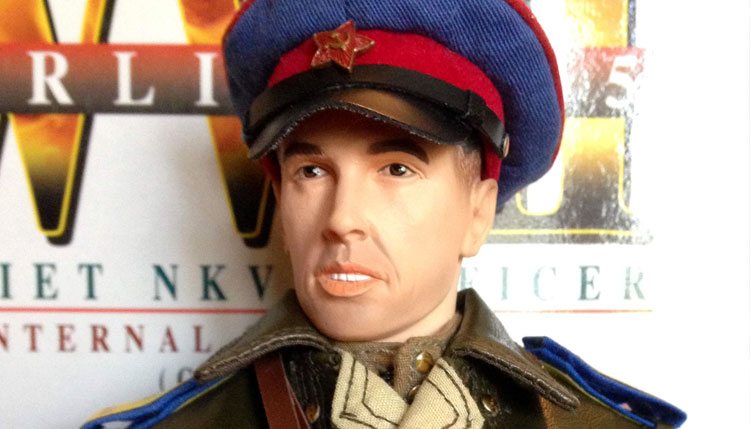 Hey everyone, welcome back. Guys, we’re taking a look at a beautiful Russian figure today. This was actually one of the very first dragon figures that I ever wanted. I started collecting, it’s been over three years now, and I remember this was one of the first dragon figures that I saw, and I just thought he looked so cool with the leather jacket. You know, I never really saw any figures like this before at the time, so this is one that really grabbed my attention and took me a long time to get him. He’s very rare and he’s hard to get for a good price. I did pay hefty amount, but definitely worth it. I’ve been wanting him for so long. His name is Alexei Petrovich Komarov, he’s from Berlin 1945. He’s a Soviet NKVD officer and he is a captain. But, just take a look at that picture of him. If you’re into Russian figures, then this is a must have. He is so awesome, especially that leather jacket is something else. 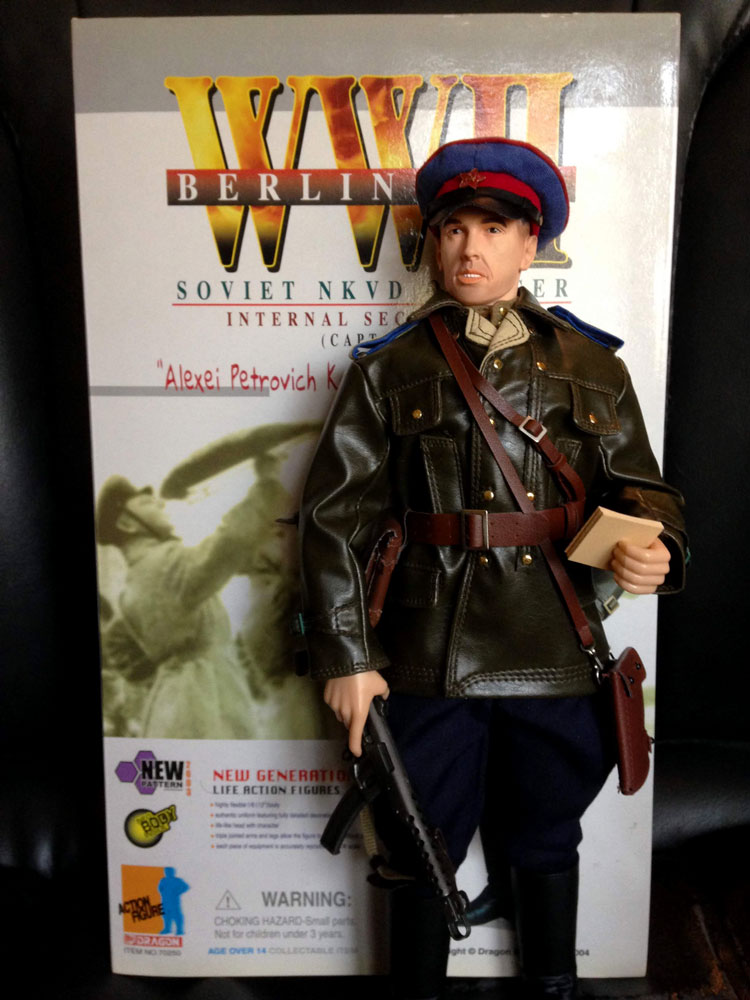 Here is another picture on top of the box of him. Another neat pose there, and then here’s the back of the box for you. This one came out in 2004, and considering he is a little older, the detail is just really good on him. So, let me bring him out. Here he is guys, all geared up. I just think he is so beautiful. Really happy to finally own this one. He was in my top 10 video, actually, of the figures that I really wanted, so I got him finally checked off that list. Just so much detail on this one. All right, well, you can see he’s holding a PPSH 43 model, and get some cool poses with that. Let’s just take a look at this up close. All right, so we got a pretty nice strap on there, pretty durable clip. The clip falls out a little easily so you got to really jam it in there. It does have the folding stock, which is pretty nice. I like that a lot. Then, you can also pull this back, so nice detail on that. 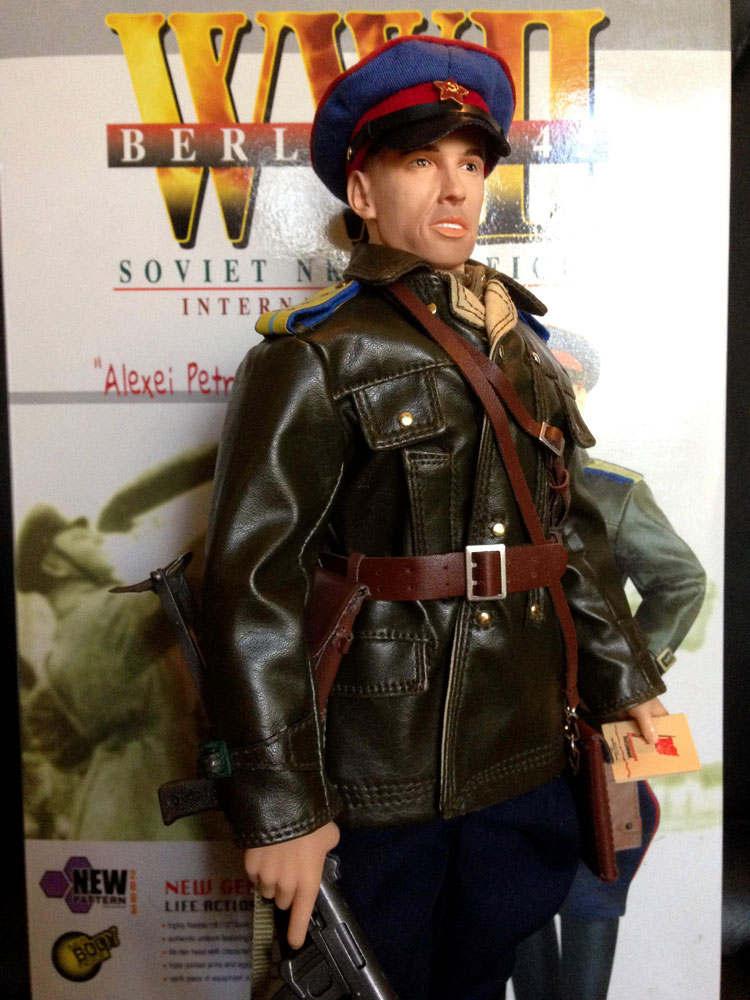 In his other hand, he’s got this little booklet here, probably a propaganda type thing. This is really good, though. I mean, you can turn each individual page, so excellent detail on the little booklet that he’s got. Let me just put this in his hands. We can get a look at him holding it. Okay, so there he is holding it. That strap’s kind of in the way there, but you get the idea. Looks really nice.

Next up, let’s look at his hat. His officer peaked cap, that’s what it’s called, which is super awesome. I love the colors on there, the blue and the red and then of course you got the Russian Red Army symbol there in the front, but I think they did a good job on this. It fits really well on his head, and the head sculpt is really unique on this one. He’s got a very interesting expression. You can see his teeth, but yeah, just a really interesting head sculpt. I’ve never really seen one like this. It always kind of stood out to me as being different, but I think it looks good. It’s cool. 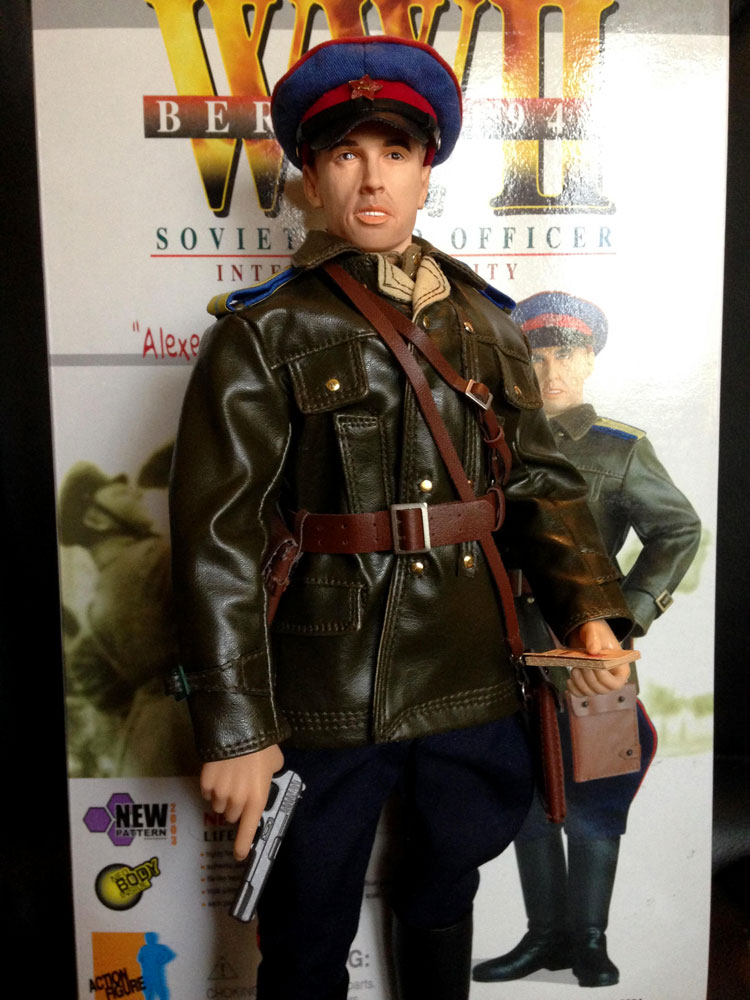 All right, moving on. Let’s take a look at some more of his equipment here. So, it doesn’t come with a whole lot of other stuff. We’ve got this bag here across his shoulder, then his belt is really nice. Everything fits really well. We’ve got the strap in the front there, and coming along the back, that looks really nice. Got his water canteen, and then he also comes with a pistol and a holster of course. Let me just take that out, and nothing, you know, nothing too impressive here with the pistol, the clip comes out.

So not too impressive, and he doesn’t hold it all too well either. But, there’s a look at that, like I said. Doesn’t hold it really well, so. But yeah, I think the major attraction here with this figure is obviously his leather jacket. This just looks beautiful on the figure and it fits really well. I just really, really love this. I can’t stress enough how cool this is. 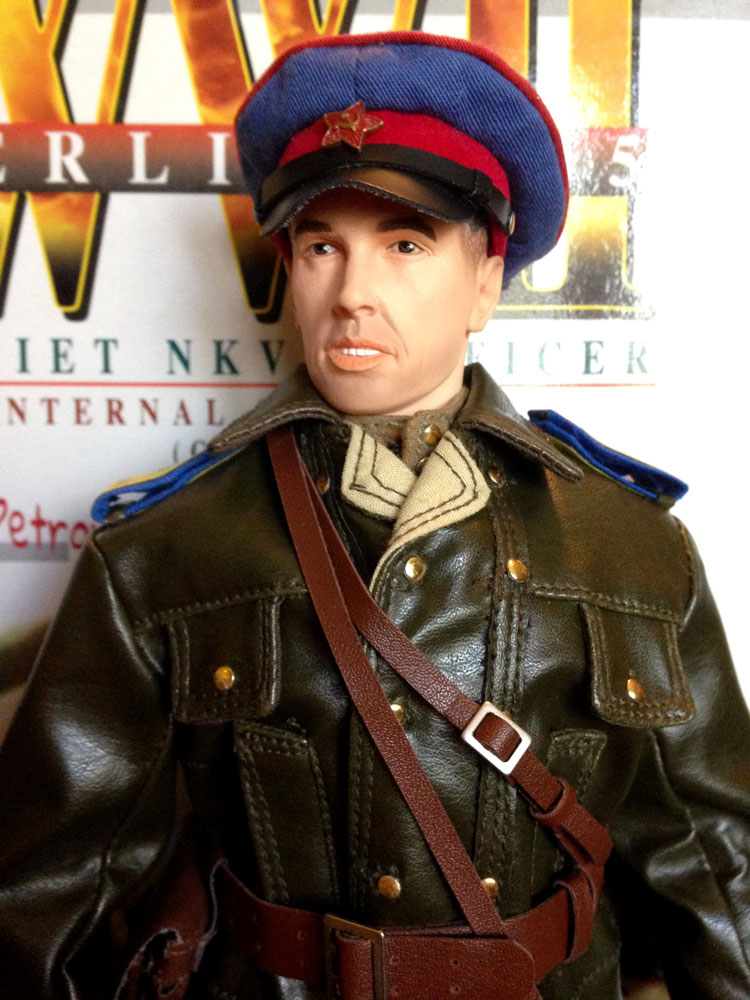 You do have to be careful, at least with my one, some of the buttons were fallen off I guess because of age, so I did have to kind of gently glue those back on. Okay. You also have to put on these shoulder tabs, which are really cool. Underneath his leather jacket you can kind of see, you can see his tunic underneath of there, and then his pants, which are also really nice, they’re like a blue color and then on this side we’ve got red stripes coming down, and then got the boots, which are also really awesome. 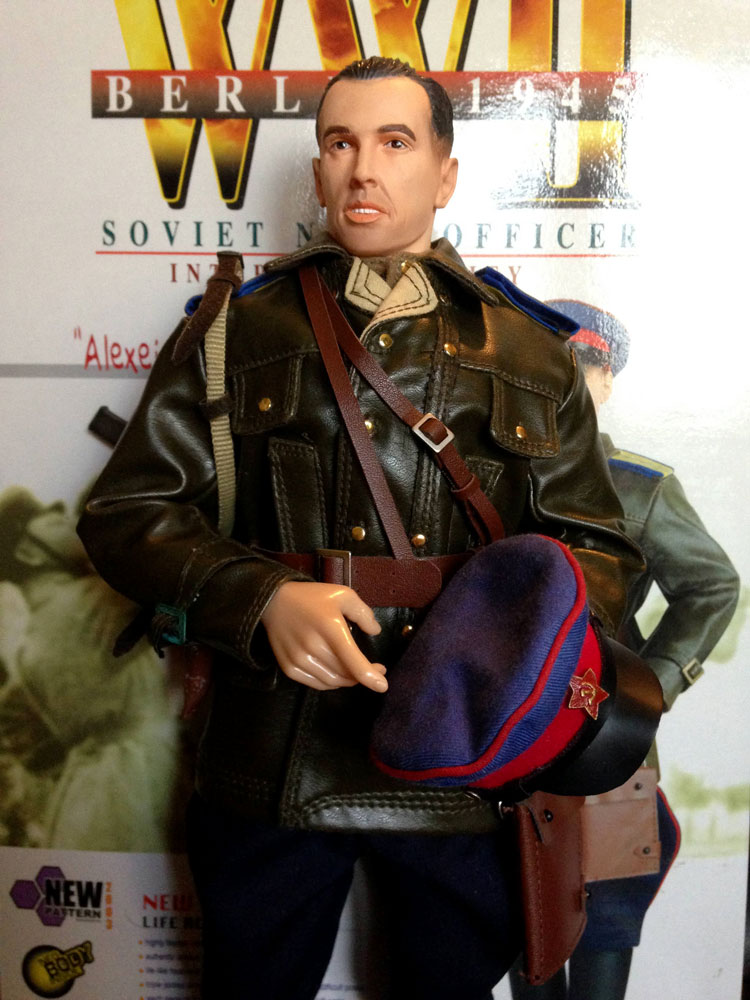 All right guys, I think that’s everything to show for Alexei. Overall, really a fantastic figure and one that I highly recommend picking up if you’re into the Russian figures. This one’s awesome, and even if you don’t really like the Russian figures, you know, I still recommend getting this one. He’s, I think, one of the best Russian figures you can get in my opinion, just because the leather jacket is awesome and I think he really just looks super unique. So, good luck finding him though. He is a tough one to track down. Thanks so much guys for watching. As always, I will see you in the next review. 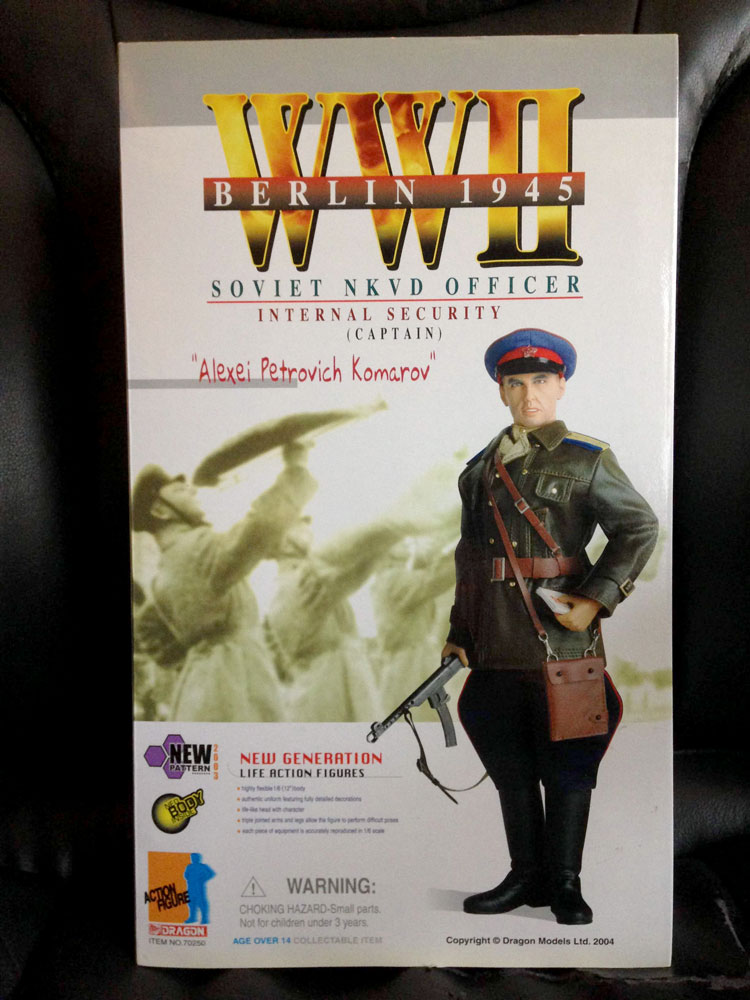 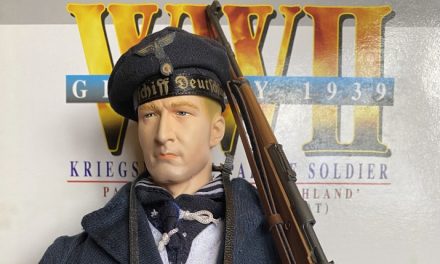