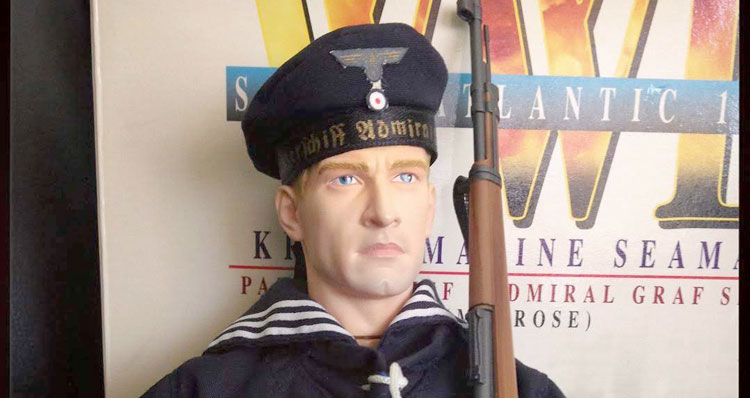 Hey guys, welcome back. Today I have a German dragon figure to show you. This is Eric Spiegel, not quite sure how to pronounce his last name, but he is a Kriegsmarine who is on the Admiral Graf Spee, which was a German battleship. And apparently the ship was involved in the very first naval battle of World War II, which I thought was very interesting. Now, the battle was fought between the British and the Germans, and the British ended up winning the battle. So just some interesting back story on the figure. 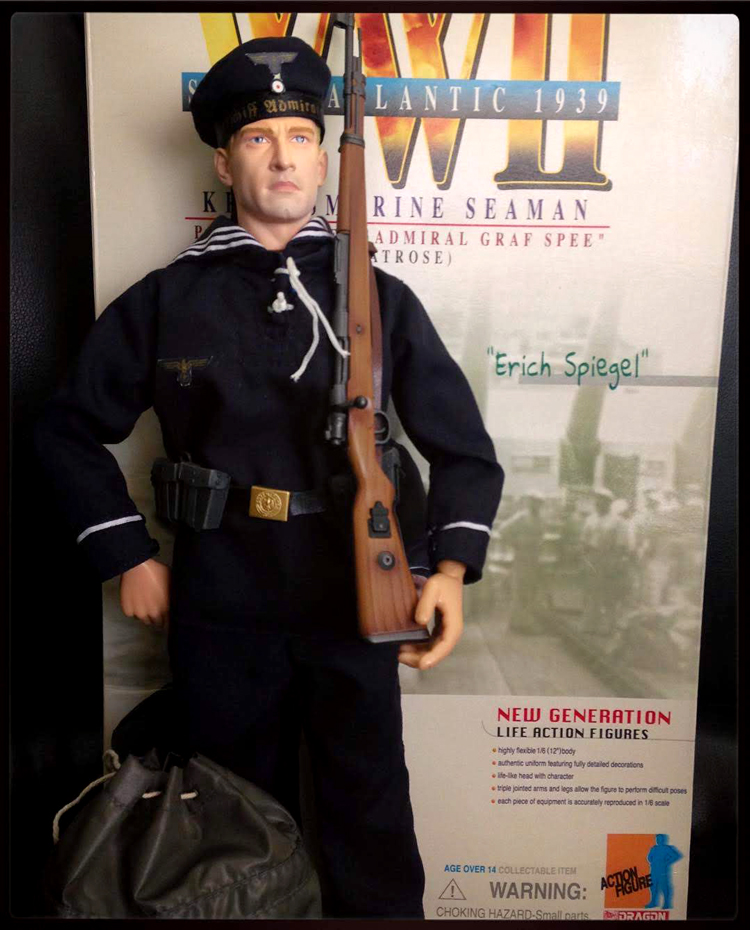 Let’s show you the box. South Atlantic, 1939, and there’s an awesome picture of the figure for you. This guy is very hard to find; I wasn’t even really looking for him, actually, he just popped up on eBay. And he went for a pretty good price, at least I thought. I bought him for $72, which for this one, I think is pretty good. Because he’s very rare. Hardly ever pops up. But he’s really nice; he comes with a whole bunch of uniforms here, you can see he’s got different uniform there, and also on the back he comes with a third uniform. So I think that’s really cool. And inside, I have those other uniforms. So in total, you’re getting three uniforms with this figure, which is fantastic. 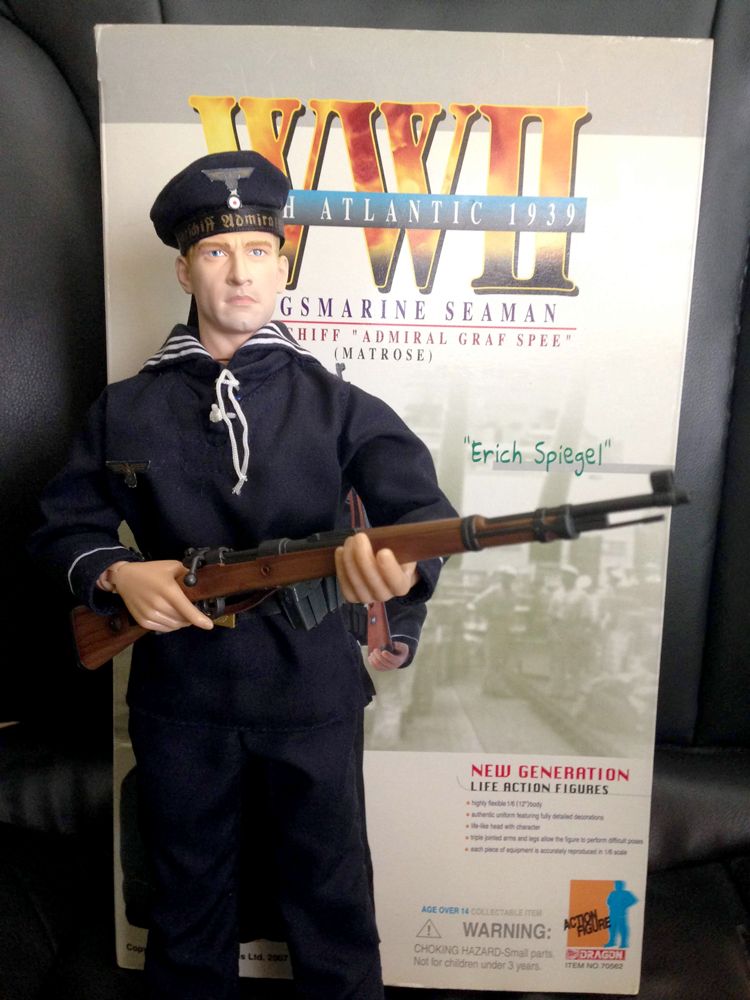 This one was released 2007. So the detail is really good on this one; let’s go ahead, and show you the figure. I got him in his blue uniform here. And I think he looks really, really good. Okay. So I won’t put on all of his different uniforms; I might actually close to the end of the video, I might show a short clip of what he looks like in the white uniform, but not all three. It’s a little hard taking off these hands and putting on the different uniforms; I don’t want to break him. But I think he looks great in this uniform. Think this is my favorite look. 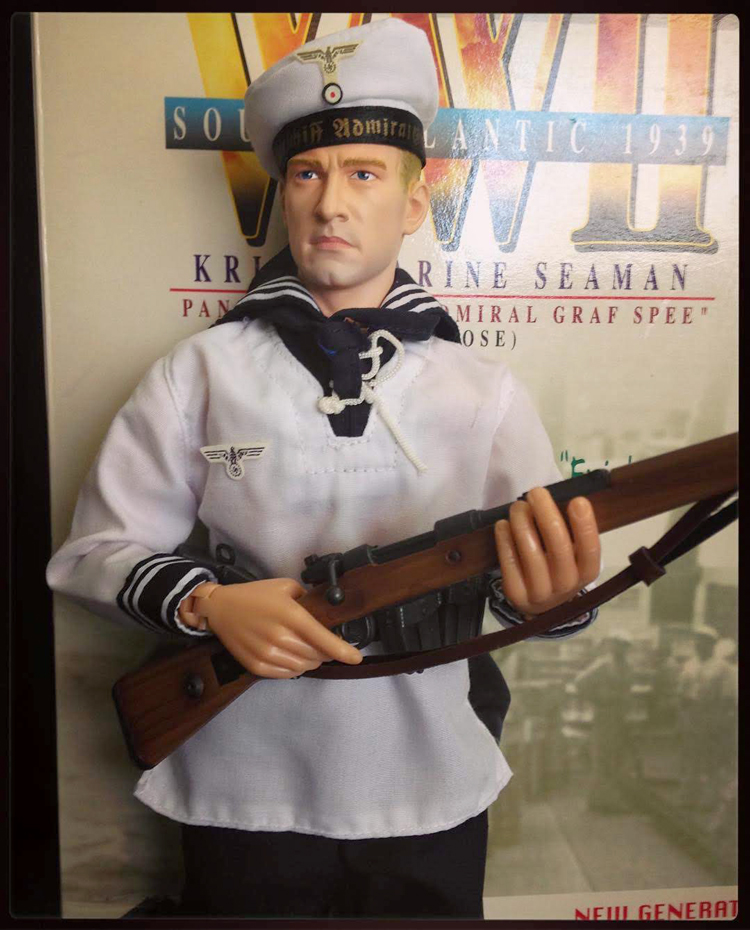 So you can see he’s got his rifle here. All right, he holds that really well; that looks great. There it is up close for you. You can pull that back; we’ve got a nice strap on that. So nice, good quality weapon. See his hat here, which looks really nice. Now, you do have to put that sticker on. Here it is up closer. You can see around it, says Admiral Graf Spee, the name of the boat, so that’s really nice. And there’s his head sculpt. Really nice head sculpt. Great quality. It’s one of their later ones. Okay. As for his shirt, this looks really nice; we’ve got this little scarf in the back, whatever you call that, very nice. Have another sticker that you have to put on, and then you got his belt, and you got these pouches here for extra clips; they give you six extra clips for his rifle, which you can put in there. 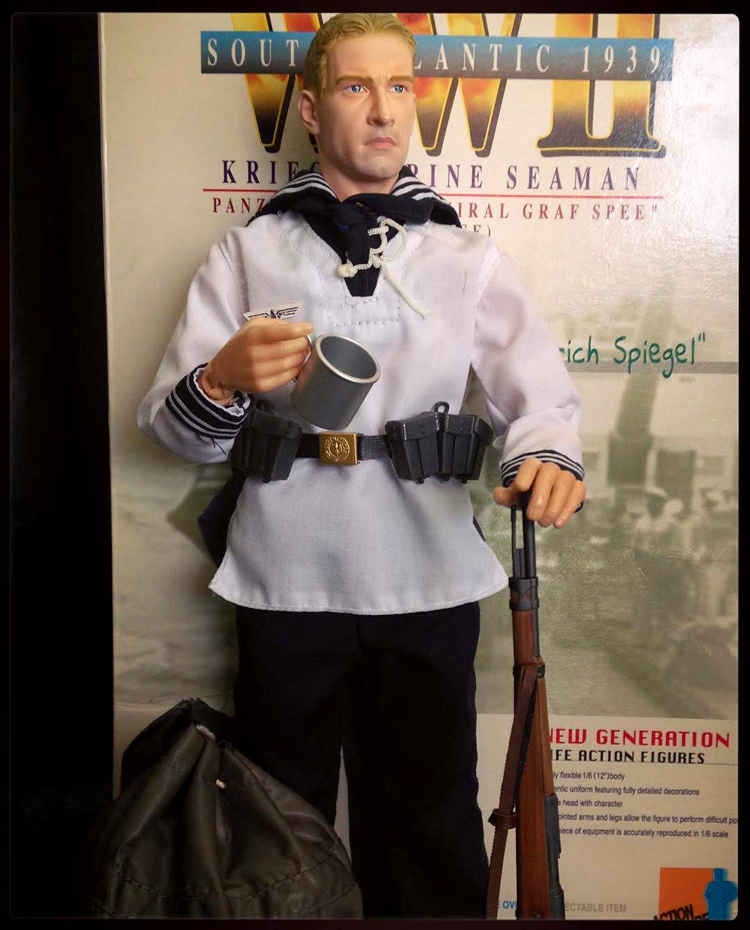 And now we’ve got his pants, which are really nice. I like how they kind of come out at the bottom here; looks nice. And then you got his boots, also very nice. Now, the figure does come with this bag for his sleeping roll. It’s called a Sea bag. So inside of here I have his, got his blanket here, and this is really nice, good quality, very soft. And also the quality on this I think is really good too. And he also comes with a cup, so very cool. All right, so if you just give me a second, I’m gonna put on his white shirt, so I’ll be back in a minute. 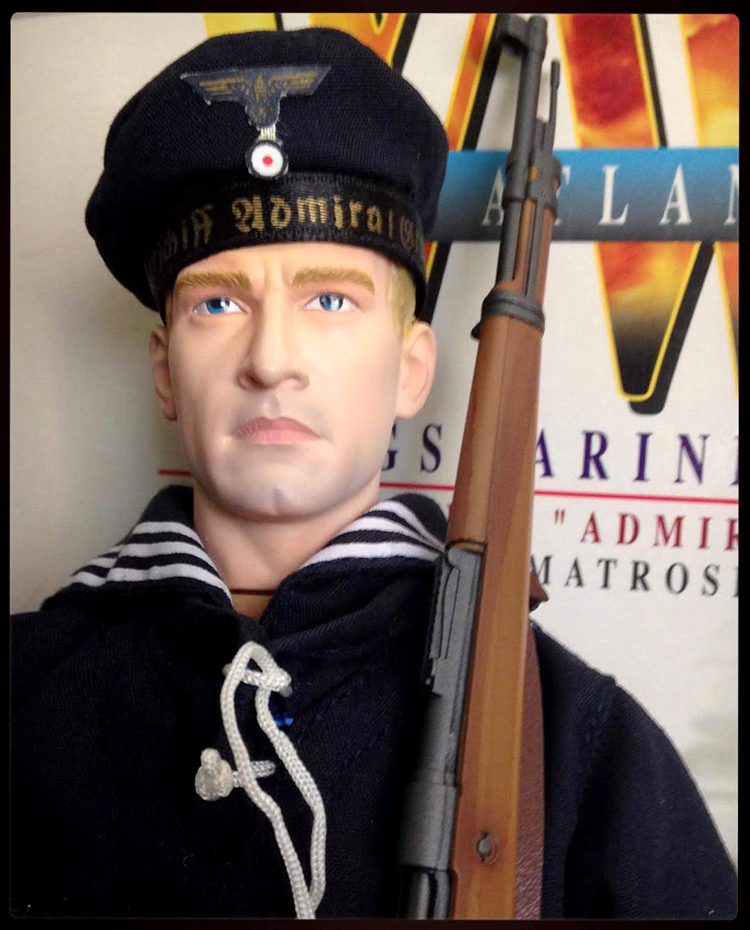 All right, guys, so it took me a little bit of time; they definitely don’t make it easy to change out the shirt, kind of a pain. And you definitely have to be careful not to break anything, especially these hands; you’ve really got to be careful with that. Or also the tunic, the material’s very thin, so you have to be careful not to tear that, but I got it on for you, and I think that looks awesome. Looks great, especially with the blue pants, I think that looks very nice. So very similar. You’ve got the cap, just basically in white color. We have the sticker, which you have to put on, same with his shirt, another sticker that you have to put on. And you’ve got the scarf in the back. That looks really good. I still think the blue uniform is my favorite, I like the look of that, but this also looks awesome. 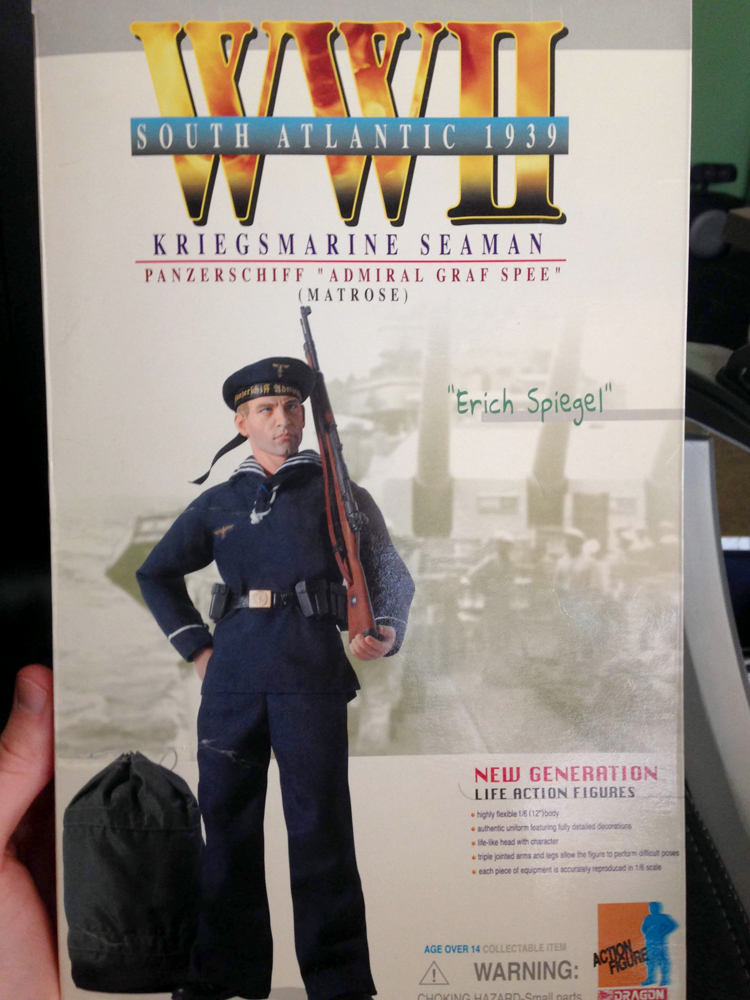 Now, I won’t put on the third uniform that he comes with, I guess this is just his kind of casual uniform here. We’ve just got some white pants and also a white shirt. I won’t put that on, but you can see it there. And I think that’s everything to show for Eric Spiegel. Overall, this is a fantastic figure; obviously you come with, he comes with three uniforms, which is very nice. He comes with also some cool equipment, so definitely a good one to pick up if you like the Kriegsmarine figures, and you should definitely get this one if you can find him; he’s pretty hard to get. But if you’re patient, he’ll show up one of these days on eBay. So thanks for watching, guys. I got more figures to review soon, so stay tuned for those videos, and I’ll see ya then. 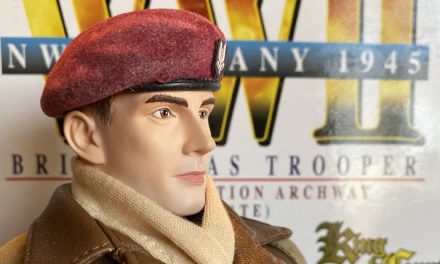