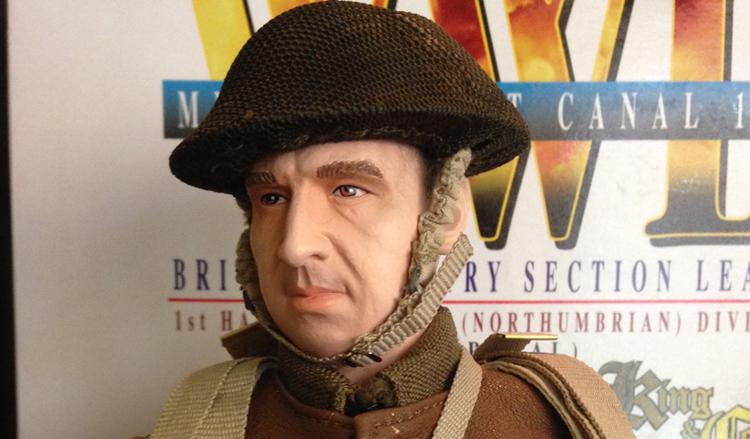 Hey, guys. Welcome back to another review. Today, we’re taking a look at a British Dragon figure. His name is Geordie Strong, and this is another figure that I’ve been trying to get a hold of for a pretty long while. I only paid $40 for him, though. He was listed at a much higher price, but I had a whole bunch of eBay bucks, and I just went ahead and spent them all on this figure, because I’ve just been trying to get him for so long. Yeah, super happy to own this figure. He’s really, really nice, and just looks very unique, so let’s go ahead and show you the box. 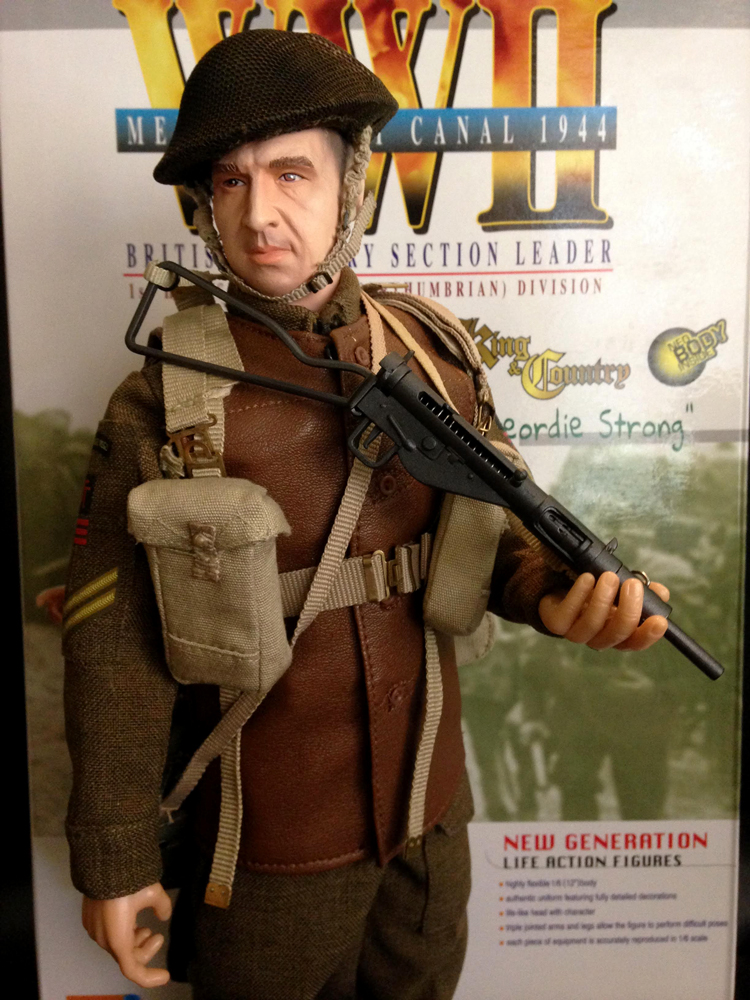 We’ve got an awesome picture of Geordie Strong there, really cool picture. It’s World War II. I’m not going to even pronounce that, but he is British infantry section leader, First Hampshires 50th Northumbrian Division, and he’s a corporal. All right. The release date on this figure was 2006, and at the top of the box… or actually, sorry, on the side, we’ve got another picture of him. There he is. Then, here is the back of the box. All right, so there is the figure’s box, and here is the figure. Let’s just take a minute and take a look at him.

All right, guys, so a really awesome figure. So happy to finally have him in the collection. As you know, I’m a huge British figure fan, and this one is very nice. I guess for starters, we’ll take a look at his Sten, which I’ve got wrapped around his neck there, in a nice pose there. 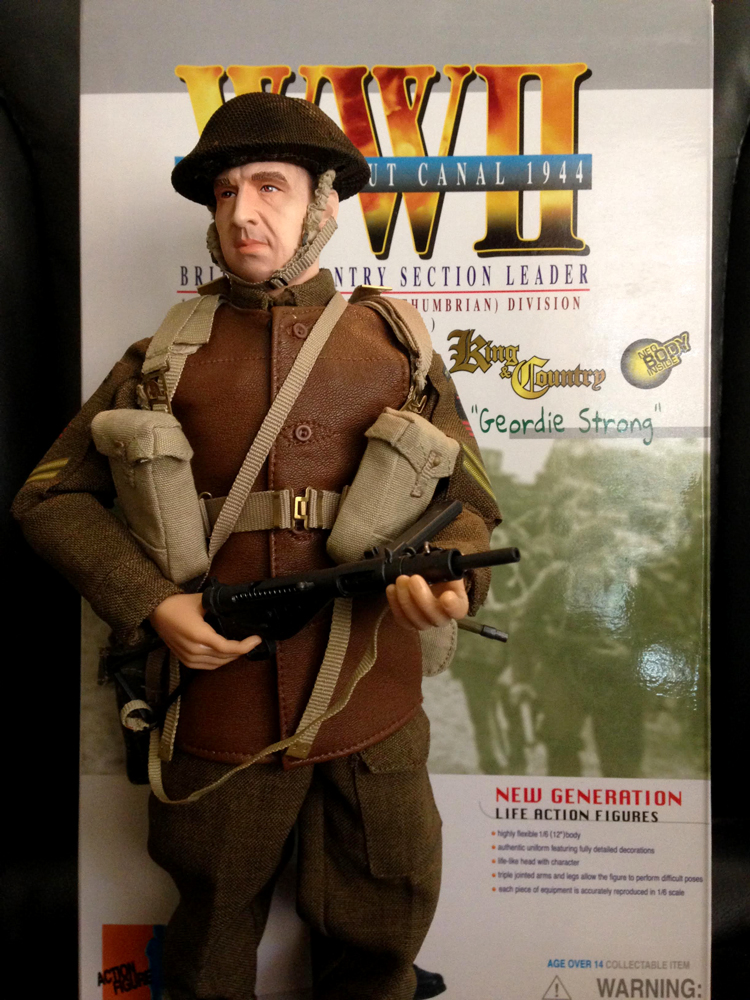 I was trying to imitate the picture on the box, but let’s go ahead and look at that. Okay, so we got the strap on there, and then you can pull this piece back, and the clip comes out, of course. All right, so nice weapon, and the figure also comes with two frag grenades. All right.

Let’s take a look at his head sculpt and his helmet. I really love the figure’s helmet. He’s got netting around it, as you can see, and over here, I’m trying to remember the name of this. I think it was some sort of pack, like a bandage pack, or there was a specific name. I can’t remember now, but a really cool helmet, really like the netting on that, and if we take that off, there’s a look at the inside. 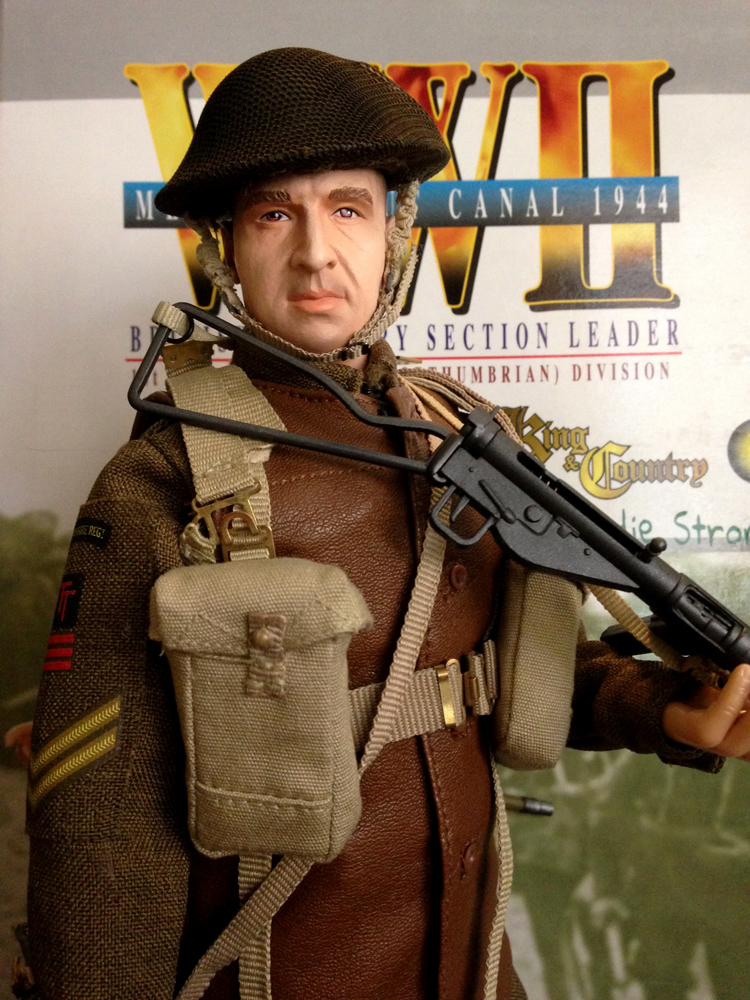 Here’s a look at his head sculpt. A pretty unique head sculpt. He definitely looks very British, I think, but really like him. You don’t see too many Dragon World War II figures with a buzz cut, so I thought that was interesting, but nice head sculpt. He has gentle features.

Okay, so moving on to his equipment, you see you’ve got pretty standard British equipment here. On the front, we’ve got two pouches there. Okay, around his chest, we’ve got this bag here, which has some extra clips in it. Let me take that off. Okay, and I have stuff, like three or four extra clips for his Sten in there. 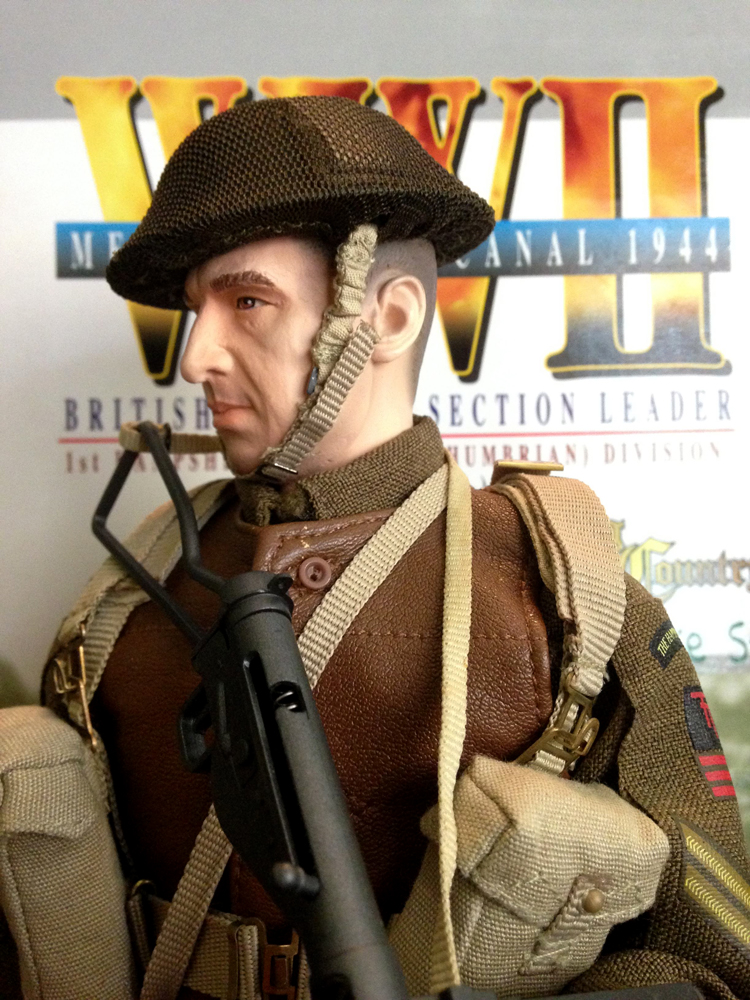 On the back, you can see we’ve got his canteen and then his entrenching tool, which I haven’t actually properly put on his belt. The British belts are always delicate so I try to be careful with these. These pieces in the front tend to break easily, so I haven’t actually put that on yet, but here it is. The actual shovel tool part is inside of the bag. Okay. Then he’s got his backpack, with his cup hanging off of there, and inside of the backpack, he does have a blanket, which I’ve already put inside.

All right, and then you can see he’s wearing this. It’s called a British leather jerkin, which is really nice. It’s good material on that. All right, I really love these. These are actually stickers that you put on. It’s one big piece that you put on. I guess if you wanted, you could actually cut out the actual insignias there and do it that way, but what I’ve done is just take the whole sticker and glue it all on. I guess it’s a preference thing, but I really love the insignias there. I think those look awesome. It is a bit of a pain getting these to totally stick on, but once you get them on there, it looks really good. 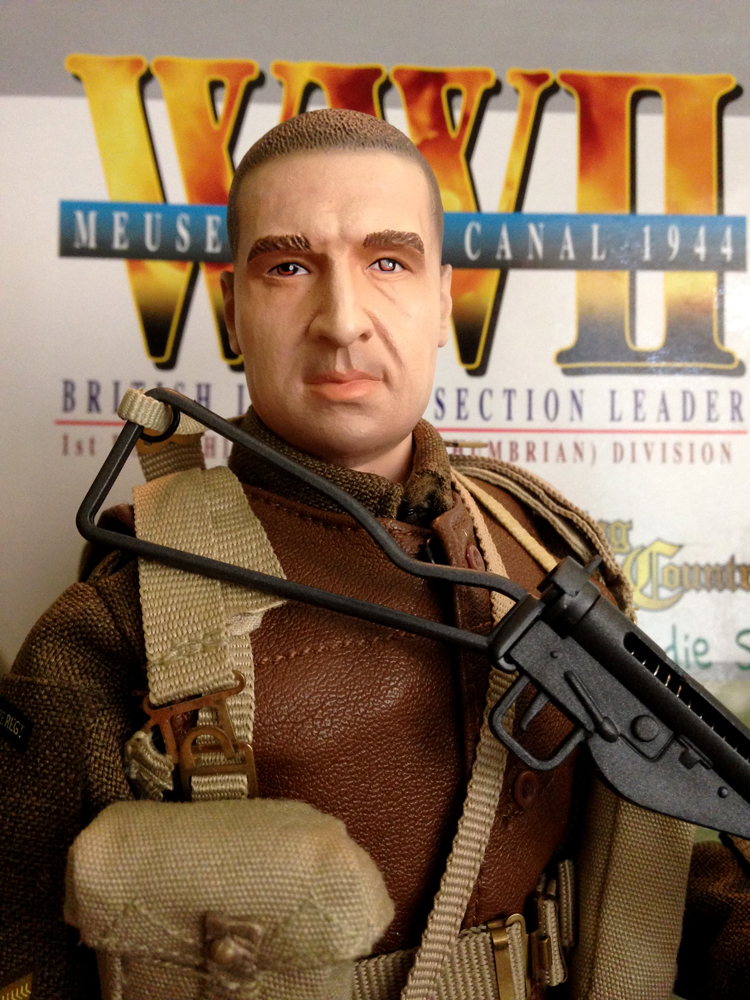 Okay, and unfortunately, his hand is very fragile. It actually looks like it wants to break, so I’m trying my best not to move that. It’s always a shame when they break right out of the box like that. But underneath the jerkin, you can see he’s got his British blouse, and then he’s got his trousers, which are really nice as always. Then we’ve got his leggings, which you do have to put on yourself. Then you’ve got his boots, which are nicely detailed as well.

All right, guys. That is Geordie Strong, a really awesome British figure, and one that I really can’t recommend enough, picking up, especially if you’re into British figures. This is a really nice one to have. He just looks super unique. His uniform, once again, I love the stickers that you put on there, and I love his helmet as well. Really love that, with netting, and I think that’s called a dressing pack in there, maybe. But anyway, hope you guys enjoyed this review. Thanks a lot for watching, as always, and I will see you in the next review. 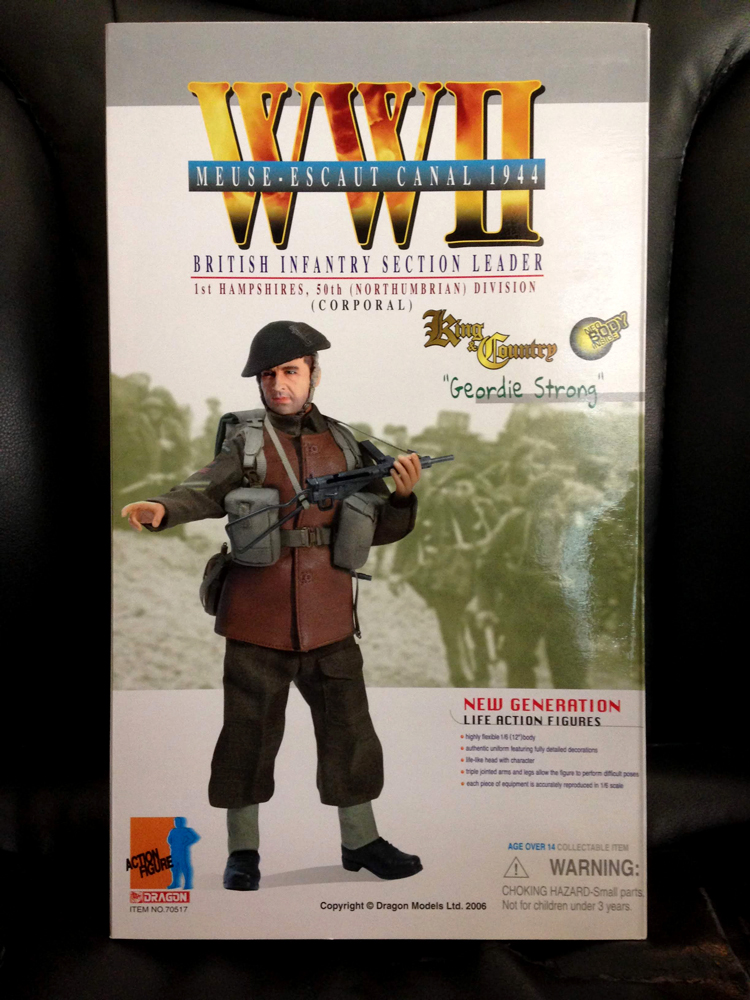 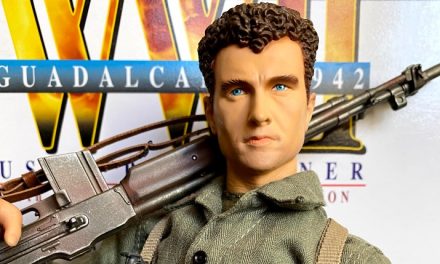