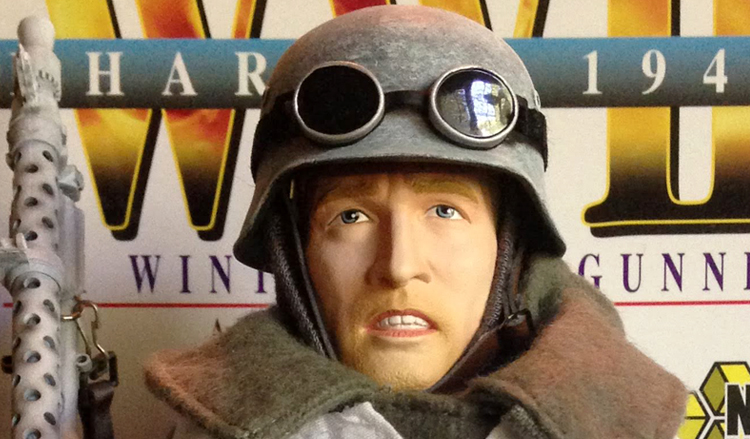 Hey guys, welcome back. I’ve got an awesome Dragon Figure to show you. His name is Friedrich Kohler. He is a winter MG 34 gunner from Kharkov 1943, and this particular figure was released in 2005. This is one that I’ve really been trying to get a hold of for a little while now, picked him up a few weeks ago off eBay, and I paid around $80, so you know that’s pretty pricey, but considering the rarity of this figure, I think that’s a fair price for him. He definitely is difficult to get a hold of. He doesn’t really show up a lot. 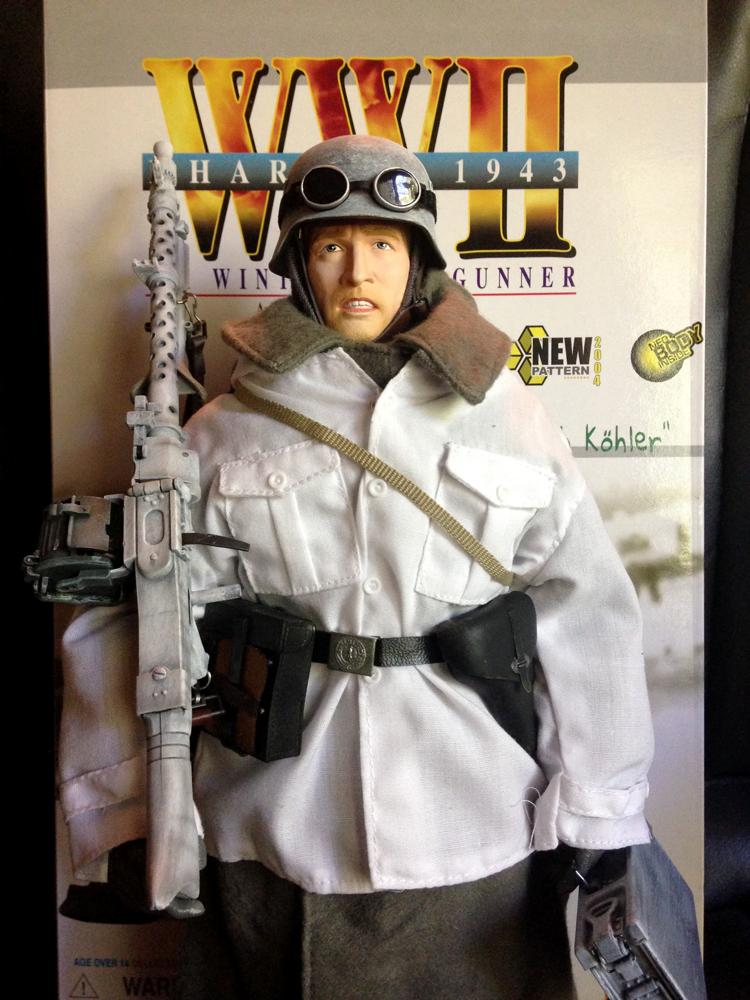 Here is the box, and we’ve got an awesome picture of Friedrich there. Great pose, and there’s another awesome picture here on the side. Great looking picture there. I love the pose as well, and I really like how they have… His coat is kind of a mask. He’s using it as a mask. It looks great. And here’s the back of the box. All right, so great looking box. Let’s bring out the figure now. He’s really awesome, and I have to say this is I think one of my new favorite figures, at least for my German figures, he’s definitely up there. I really, really like him. The detail is great, and once you get everything on this guy, I think he looks fantastic, especially the helmet with the goggles on top. Just, the detail is really good on this one. 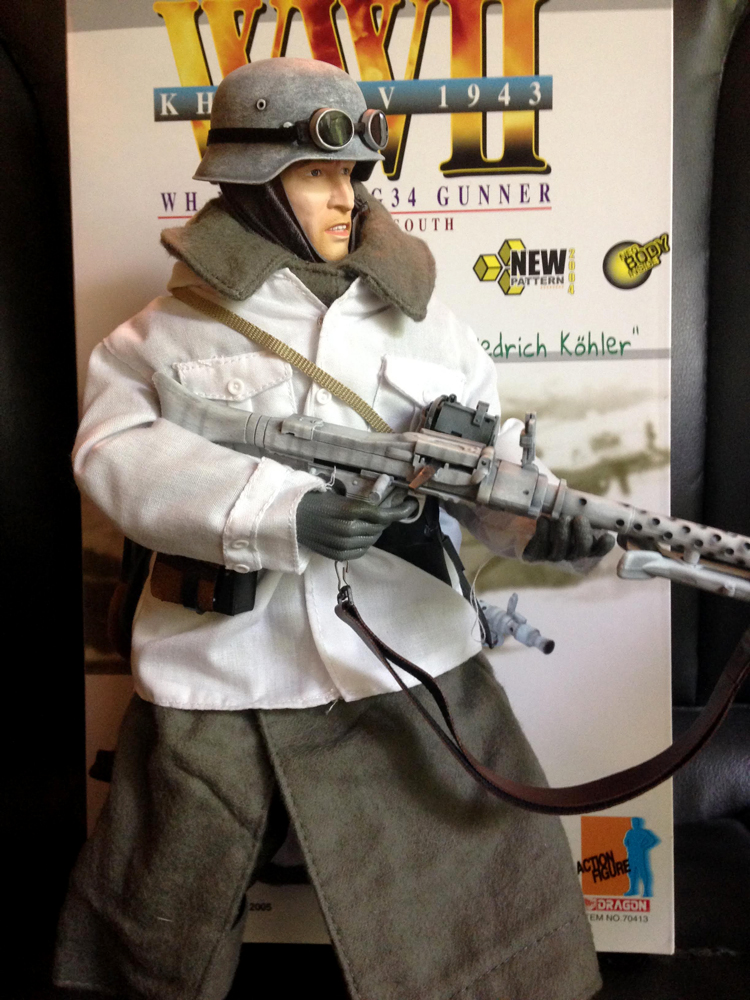 Let me try to get him posed with his MG 34 here. There we go. Pretty bulky figure. He’s got a ton of layers on here, so he’s very big and bulky, but feels very sturdy as well. All right, so you can see I got him holding his ammo box. Here’s a look at that. Great paint on this. It looks like it’s been in the snow, so great detailing, and if I open this up, you see got some a bolt strip there, and that’s not… You know, you can’t take that out, but they do give you another bolt strip here, so there’s that. And they give you two of these saddle drums, actually. This one is like a dark green color, and then the one that I have on is MG 34 is… It looks like it’s actually been out in the snow, so once again, great detailing on that. 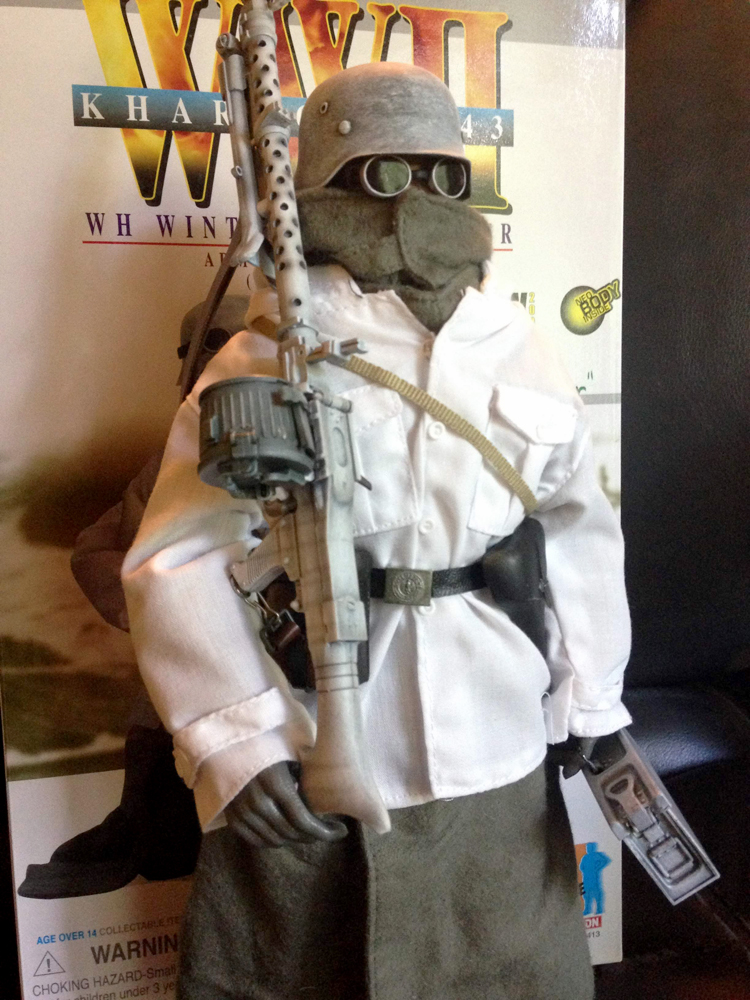 Overall, the MG 34 looks fantastic. I love the white. It just looks great, and you’ve got a nice strap on there. Okay, and then you can see… Let me pop that open. There’s a look inside. There is the saddle drum. You can see there is a smaller strip of ammo that you can put on there. Okay, you can pull that back. The sights come up. Okay, and the bipod. You can open this up, and here is this piece here, which I know the name of. I can’t remember it at the moment, though. All right, so awesome weapon here. Once again, I just love how this looks. I love the white. Looks fantastic. Let me get the figure to pose with it, actually. 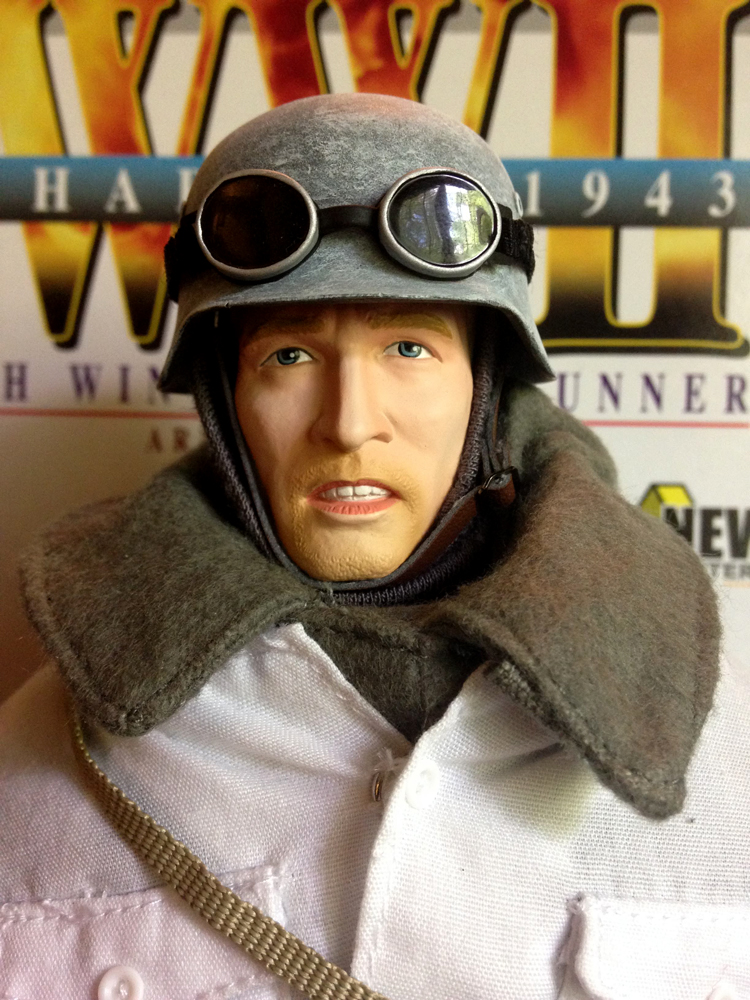 Okay, so there he is holding it. Once again, looks fantastic. All right, moving on. Let’s take a look at his helmet, which honestly, I think is my favorite part about this figure. I love the way that this looks here. The goggles especially just are great. Then, if you want to take those off, there’s a look at the helmet, which is very nicely detailed. The quality on this thing is amazing, I think. They did a great job with it. Okay, and if you want to put the goggles on the figure, here’s a quick look at what this would look like. There you go. All right, and here is the head sculpt for the figure, which is also really nicely detailed. I like the expression that he has. You can see his teeth, and let me pull back this headscarf here and you can get a better look at his hair. 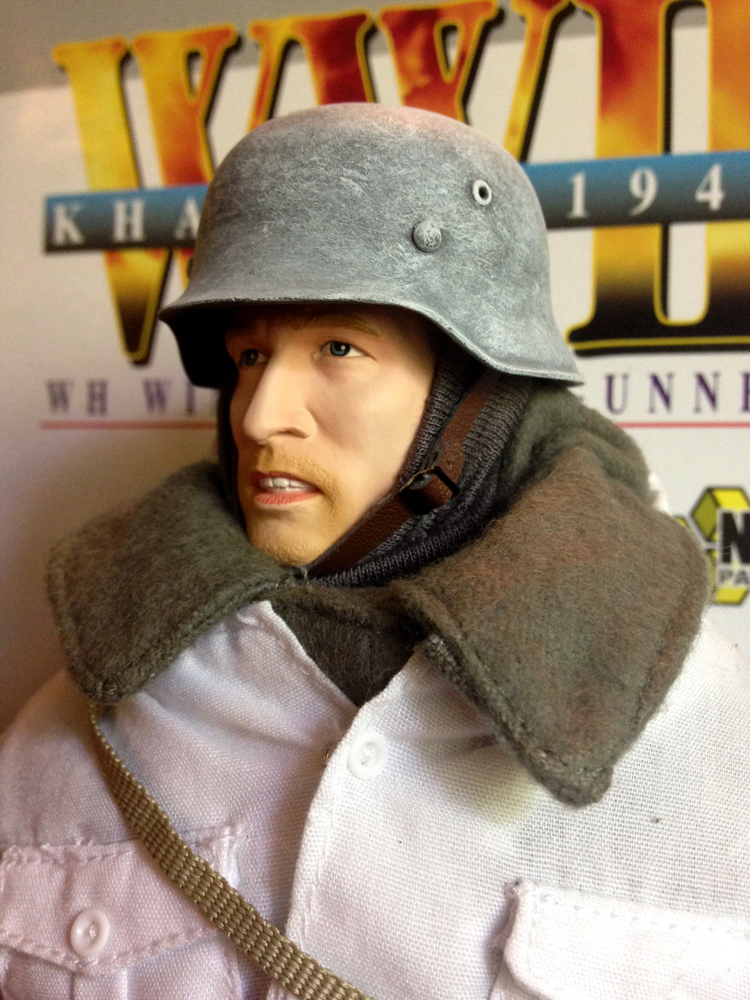 Moving on, let’s take a look at his uniform. We got his white winter smock, which also looks great, and in the front, we got his belt, got his holster here, with pistol inside of course, and we got this pouch here, which I can’t remember the name of, if it has a specific name, but in the back, we got his knife and the sheath, his gas mask canister there. And of course, we got the canteen, the bread basket, and the mess tin. All right, and I won’t take the smock off, but let me just unbutton it a little bit, and you can see the huge coat that he’s gone underneath. All right, and then underneath that, he’s got another layer, I believe, so a lot of layers on this guy. And here’s a look at it from the bottom. There are his pants underneath. 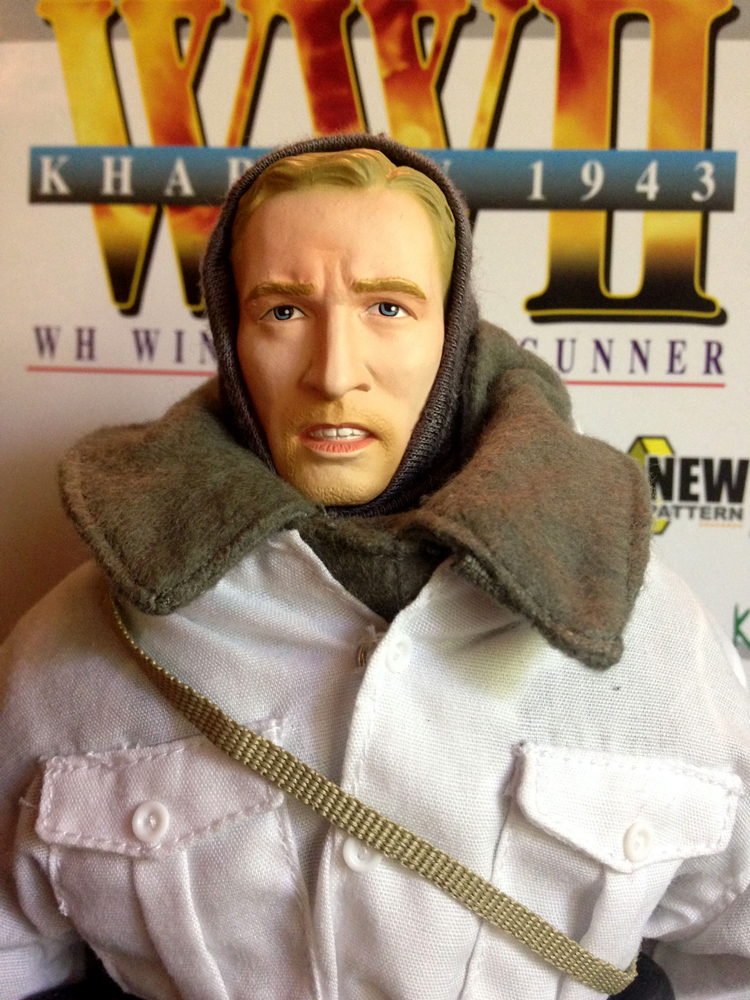 Then we got his boots, which are really nice, pretty squishy boots actually, but they’re nicely detailed. The upper portion here is like a fuzzy material, but I liked the way those look. Okay, and then the inside of this is also a nice, fuzzy material, so overall, really good quality stuff here, and it looks great on the figure. It definitely is tedious putting everything on here, because of all the layers, and then he’s equipment over that. You have to loosen up his belt a good bit to get everything to fit, but once you get everything on the figure, it really looks good, I think.

So that’s everything show for the figure. Once again, he’s really a awesome figure, and one that I highly recommend picking up if you can find him. Definitely worth it. Definitely worth the 80 bucks that I paid for him. The detail is great, especially on the helmet, and then the MG 34 is awesome as well. So yeah, hope you guys enjoyed this review of Friedrich Kohler. Thanks so much for watching, and I will see you in the next video. 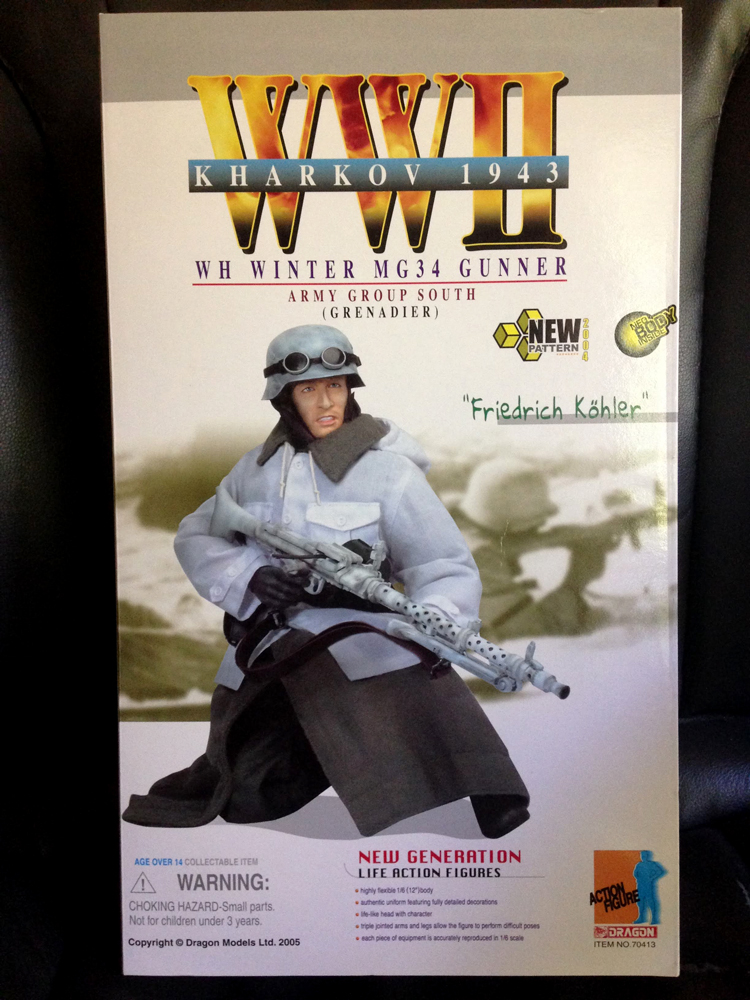 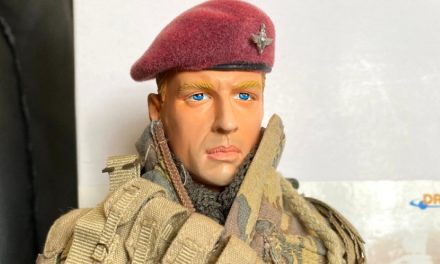 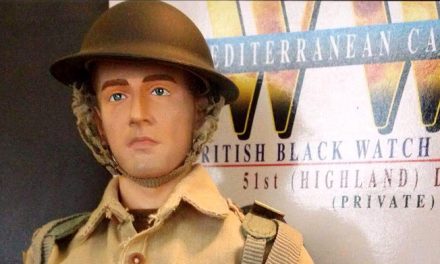 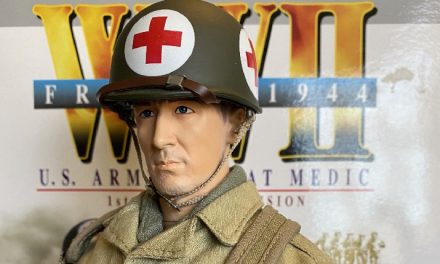