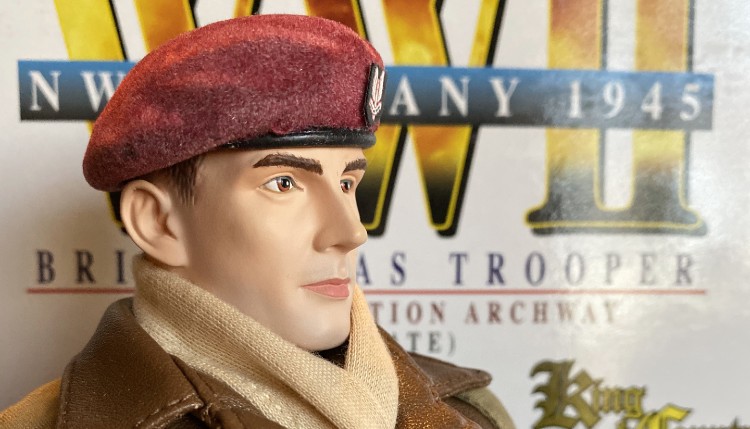 Hey, what’s up guys? Welcome back to another review. We’re taking a look at another excellent Dragon figure today. Hi name is Kenneth Laird. He’s a British SAS trooper from Germany in 1945. So let’s go ahead and just jump right in. Let’s take a look at his box. Got an awesome picture of Kenneth there. He looks very regal in a way I think. Really like that pose he is in. I’ve always been a huge fan of the SAS figures and this one has been on my wanted list for a good while now. But on the side of the box, we’ve got another picture of him there. 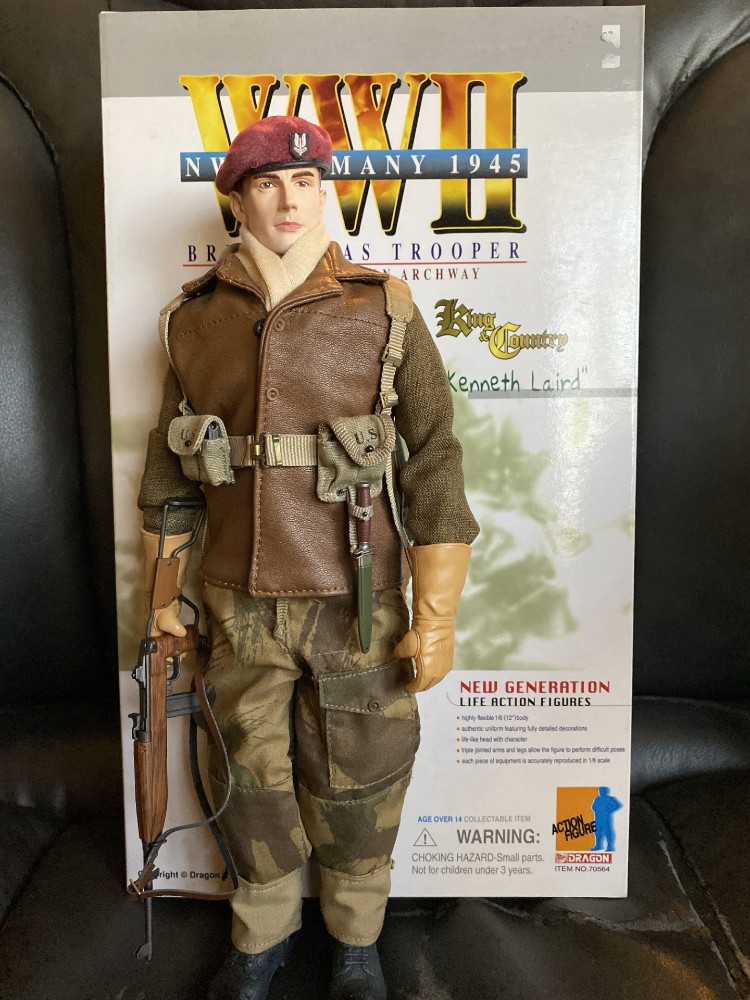 And then here’s the back of the box. And you can see the release date on this one was 2007. Inside I do have, he does come with two pairs of hands, so he’s got the normal dragon hands there and then he obviously comes with the gloved hands here, and I’ve got him wearing these right now. But it is cool. It comes with two pairs of hands. Let me go ahead and bring them out now.

All right, here he is all geared up. And he just looks fantastic in my opinion. Really awesome figure. Oops. Doesn’t hold that all too well. I’ll get into that in a bit. All right, so let’s go ahead and look at his weapon that he comes with, which is an M1 carbine, which is really interesting. If you notice this figure comes with some American equipment. In the front he’s got these two us pouches, and then he’s got the carbine, which is an American gun. 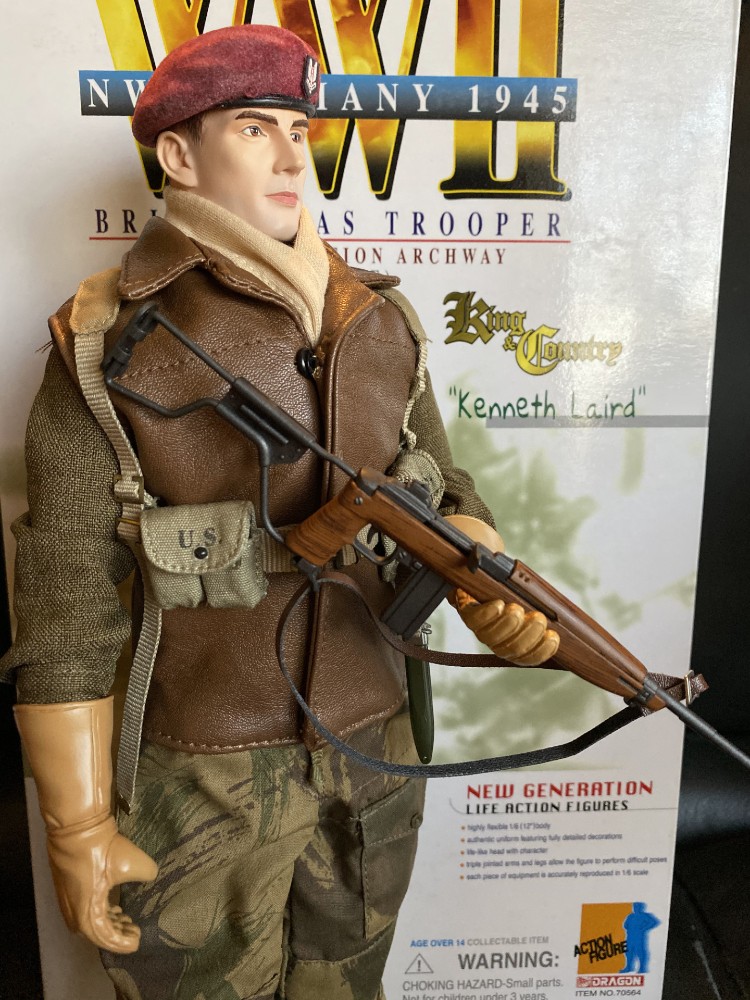 I guess the British and the Americans were sharing equipment at this point or something like that. Thought that was interesting that he comes with some US equipment, but really awesome carbine. I love that this one has the folding stock in the back. Great detail on that. You don’t see a whole lot of these. Only a few figures that I know of come with the carbine with the folding stock. So it’s pretty cool. I’m not a huge fan of the strap on it, though. It’s a little awkward trying to adjust it. I was having some trouble with it.

So not a big fan of that, but the clip comes out of course and you can pull this back and see the bolt inside. But yeah, really nice. Let me go ahead and just put it in his hand one more time. He doesn’t hold it too well, the gloved hands are a bit of a restriction with him holding it, unfortunately. But still you can make it work. It does look really cool. 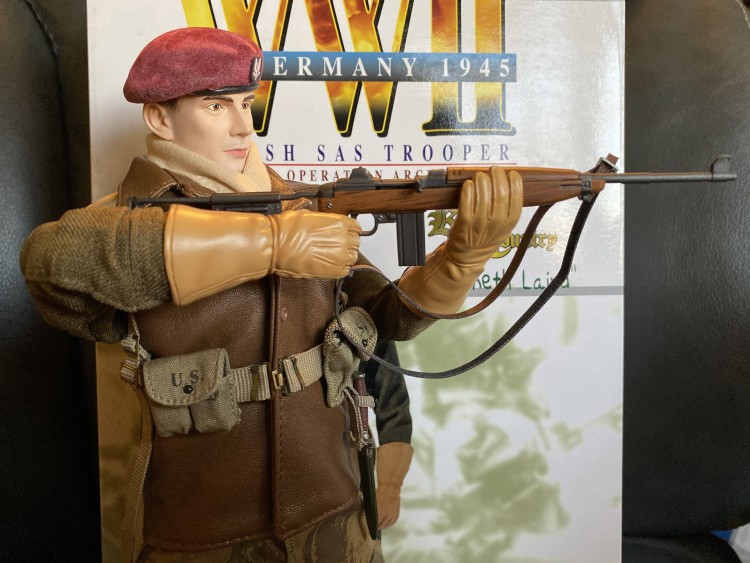 It’s a very nice weapon. But yeah, unfortunately he can’t hold it all too well with the gloves on, because these aren’t like the bendable gloved hands. I mean, they are a little bendy, but not actually like they don’t mold or shape into the weapon, if that makes sense. But moving on, let’s look at his head sculpt of course his SAS beret, which looks fantastic on his head.

And here it is up close. You can see the small sticker that they give you for his beret. Got to be careful. Make sure you don’t lose that. Pretty easy to lose, if you’re not being careful. But awesome beret as always, and then here is his head sculpt, which I really like. I think he has a very distinguished look. Something about this figure. He just seems very regal. That’s just my opinion though, but yeah. Nice head sculpt. 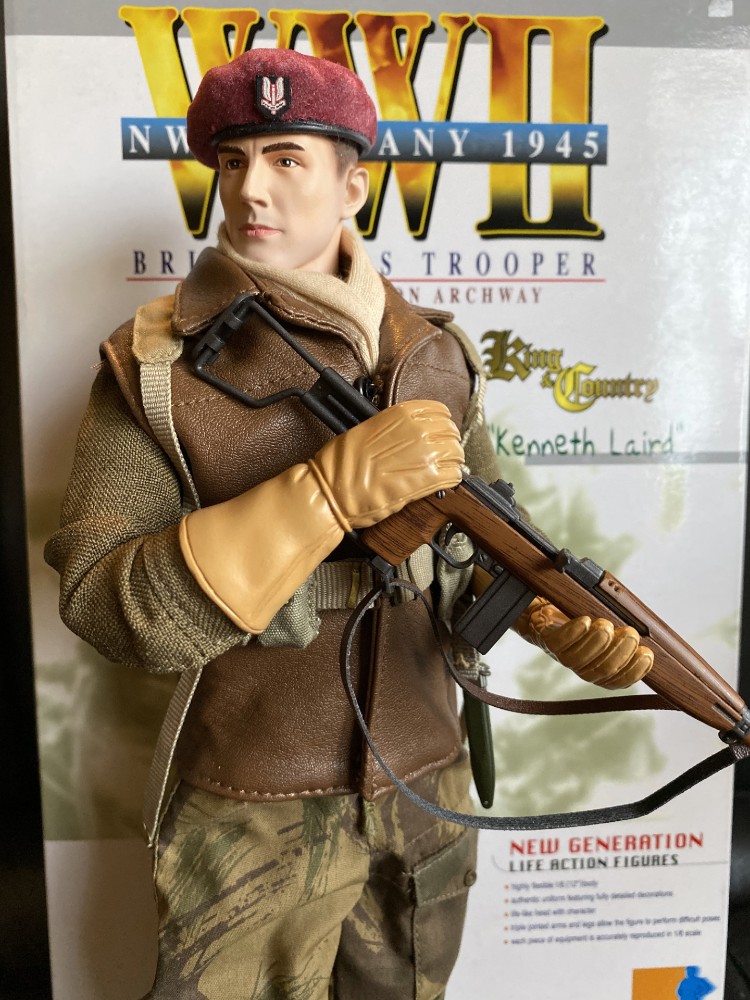 All right, moving on. Like I said, he does have some US pouches in the front, which is very interesting. Inside of here, he has some extra clips for his carbine and over here, he’s got some more. And this is cool here how this is. He’s got a knife hanging off of this pouch here, which is interesting. I like that a lot. Let me go ahead and try to take the knife out very gently. Give me one second.

So there’s a look at the knife he comes with, nicely detailed. And yeah, it’s cool sheath that it has. I like how it attaches onto the pouch in the front. And then in the back, he’s got his water canteen. So not a whole lot of equipment with this one. He’s a pretty simple figure I’d say, but everything fits on pretty well. It’s a little tricky getting these straps all situated on him. That definitely took some time. But yeah, it looks great. 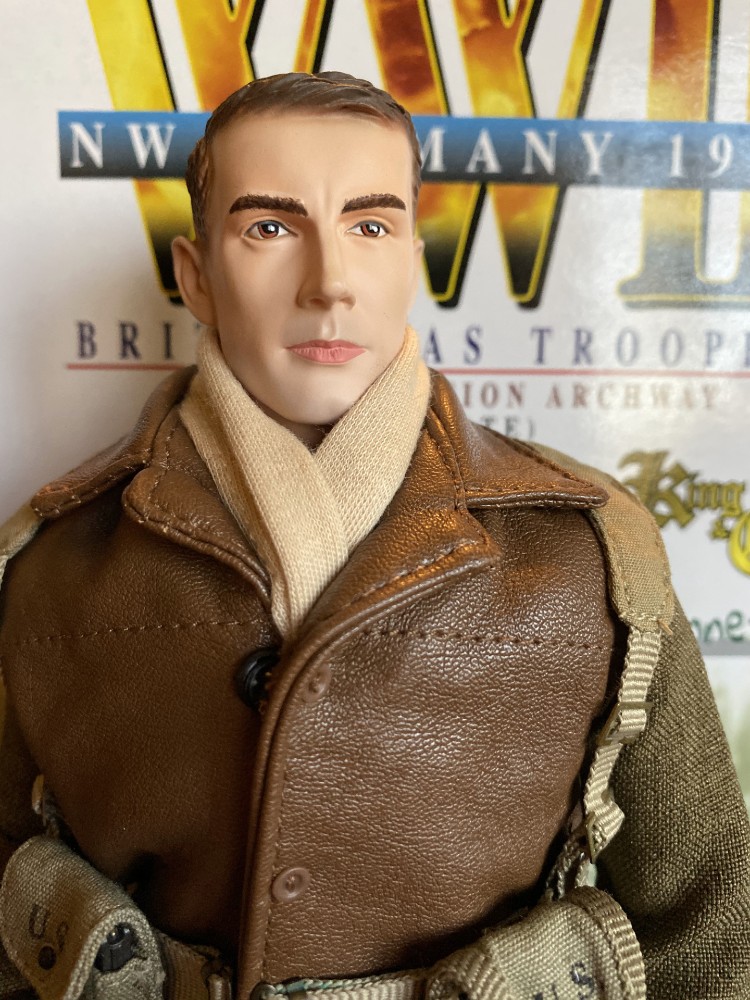 So as you can see, he’s wearing the British leather jerkin and he also has a scarf that he comes with. And you can see his uniform underneath of that. And of course his hands here, which are the British gloves as they’re called, which are really nice. Excuse my voice. Yeah. They look really good on the figure. Very unique. I don’t think I’ve ever really seen any other figures with these, maybe one or two, but don’t see them a lot.

Lastly, let’s take a look at his pants, which have got the nice camouflage pattern on there. On the box, he’s not wearing the leggings, but I’ve decided to put them on since they do give them to you. I prefer having them on. I think that looks a little baggy. The pants are very baggy, so I think it’s good to have these on. It doesn’t look as messy in my opinion, but those look great as do his boots. And I think that’s everything to show.

Overall, an excellent Dragon figure and a great SAS figure. He’s really nice. Can’t recommend him enough. He is a hard one to track down of course as is the case with most British figures, unfortunately. So you really have to look around if you want him. I did pay a pretty high amount for him just because I was so desperate to get him at this point. But yeah, he’s really nice. So I hope you guys enjoyed this review of Kenneth Laird and I will see you next time. 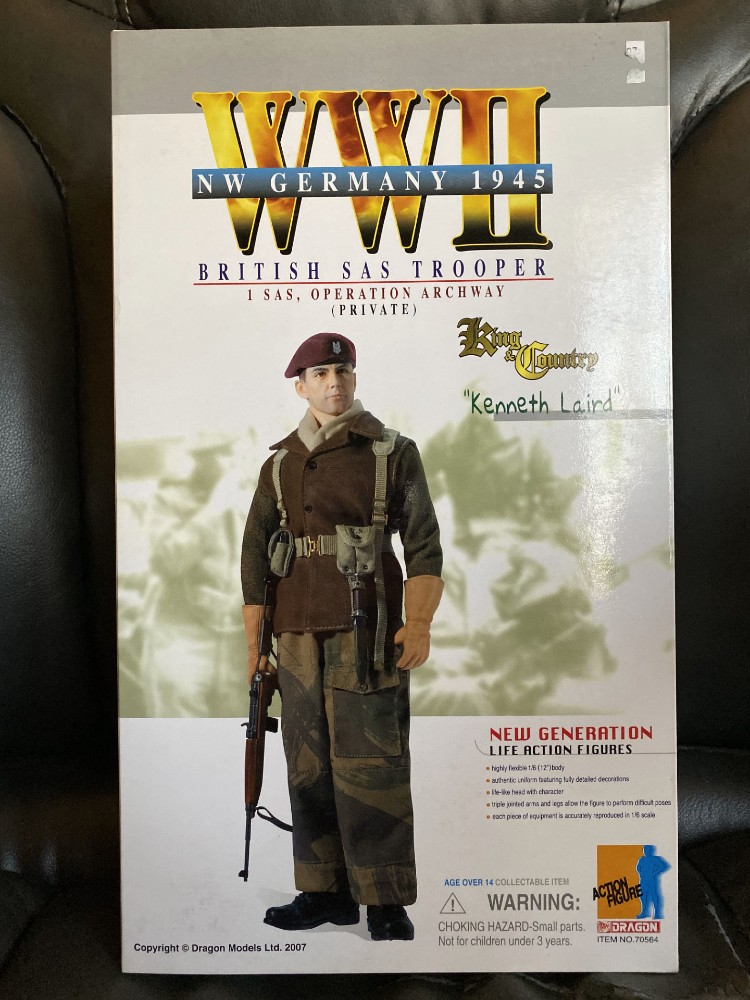 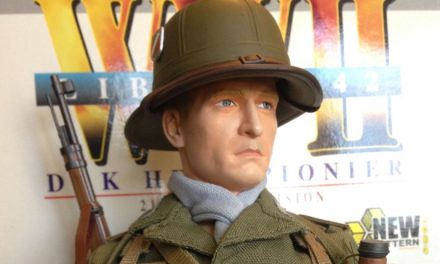 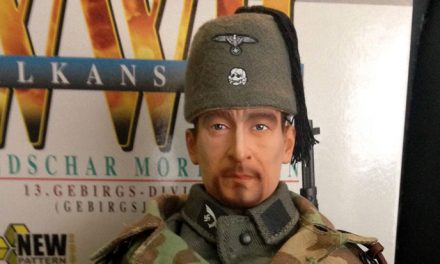