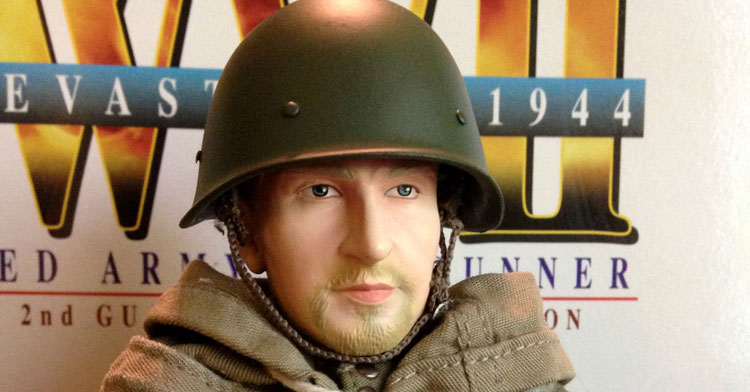 Hey guys, welcome back. I’ve got a great Dragon Figure to show you here. This is a Russian figure, which I am super excited about, because it’s been over a year since I’ve picked up a Russian Dragon Figure. The Russians are really hard to get a hold of, especially this guy, I have been trying to get him for a good while. He’s pretty hard to get so I’m really excited right now. His name is Sergei Ivanovich Kozlov, he’s a Red Army DPM Gunner, part of the 2nd Guards Infantry Division, and he is a corporal. 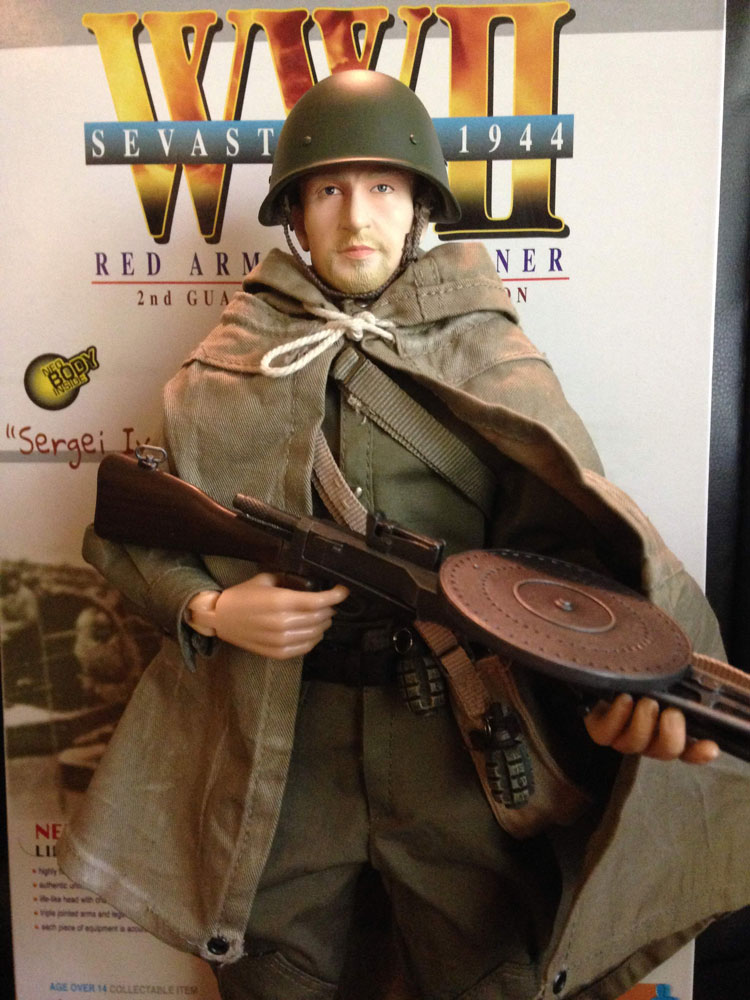 At the top it says World War II, Sevastopol 1944, and we’ve got a great picture of the figure here. It looks really epic, especially with the cape. It’s not called a cape actually, on the back, I’ve got the name of it there, and it looks great. And this figure came out in 2005. So, a great looking box, love that picture of the figure.

Let’s bring out the figure now, here he is. All right, so awesome looking figure. The detail is great on this guy, he really stands out, I really love him. So, for starters let’s take a look at his weapon, which is the DPM light machine gun, and this is a really nice weapon. I love the way it looks with the round drum magazine on top, really cool, and he holds it pretty well. Here it is up close. Okay, there is a strap on there, and you can pull up the sight if you want to. There is a little piece down here that you can pull back, right over there, and then it does have the bipod on here. And then, you could take the magazine out, or off rather. All right, so awesome looking weapon. 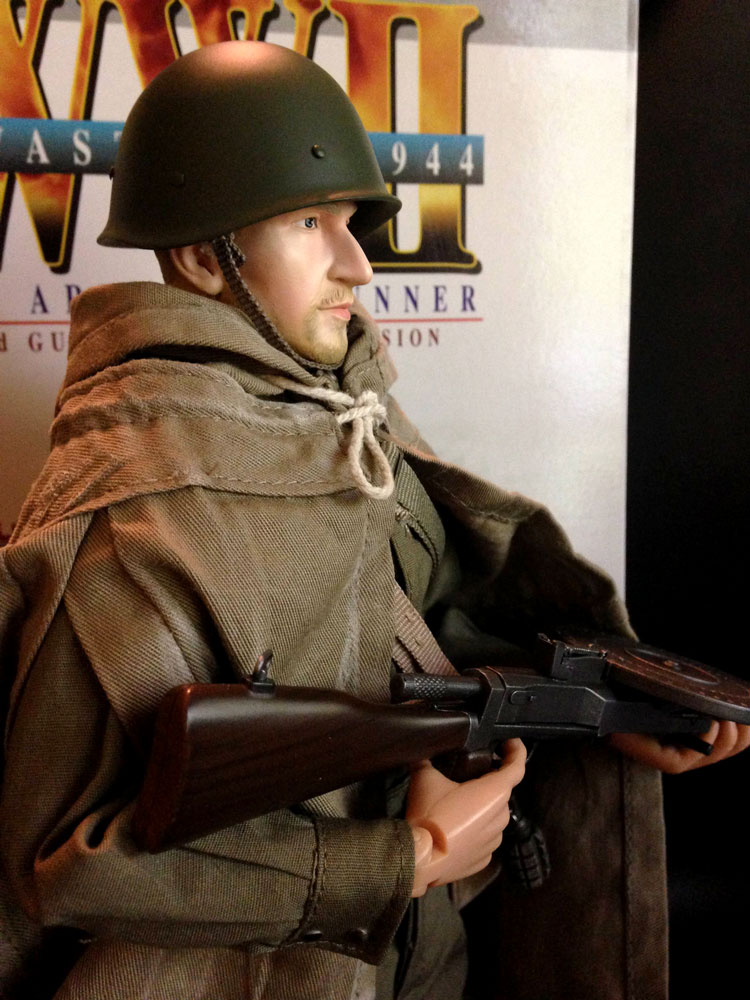 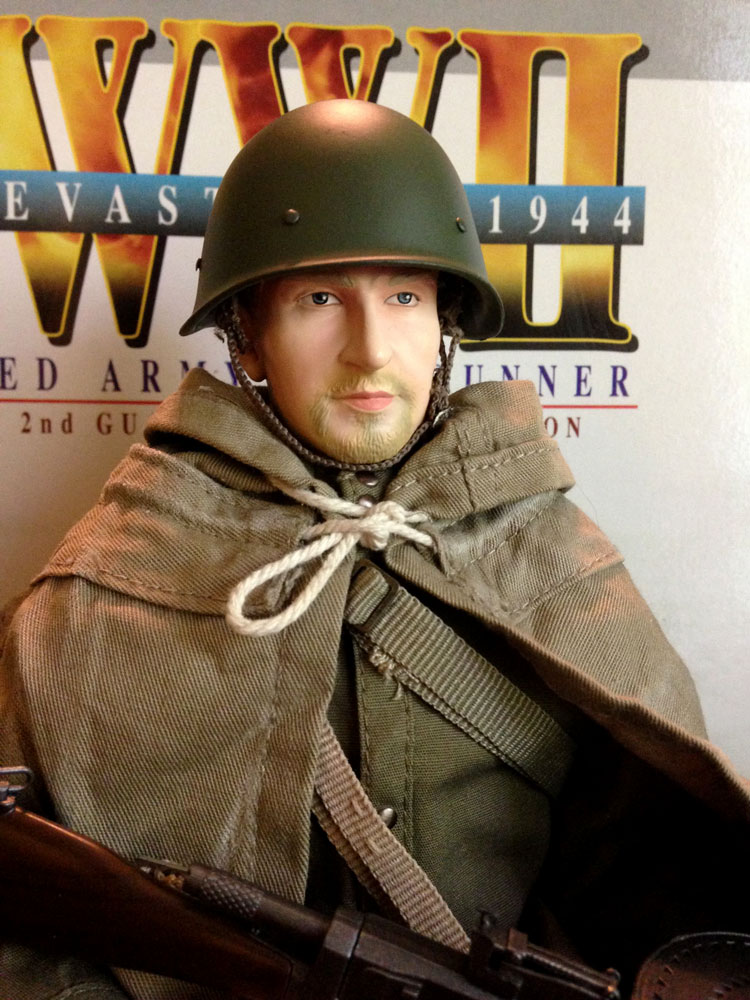 Okay, moving on. So, obviously he has the, it’s called the palatka, which is pretty much like this huge cape. It’s really nice, you can tell they put a lot of detail onto it, it looks very worn. You can see he’s got his right arm, which is slipped through this opening here. Let me take this off, great piece of equipment there. All right, so as far as equipment, he doesn’t come with a whole lot of stuff here, pretty simple. He’s got this big bag here, and he’s got another one here which has an extra magazine for his machine gun. 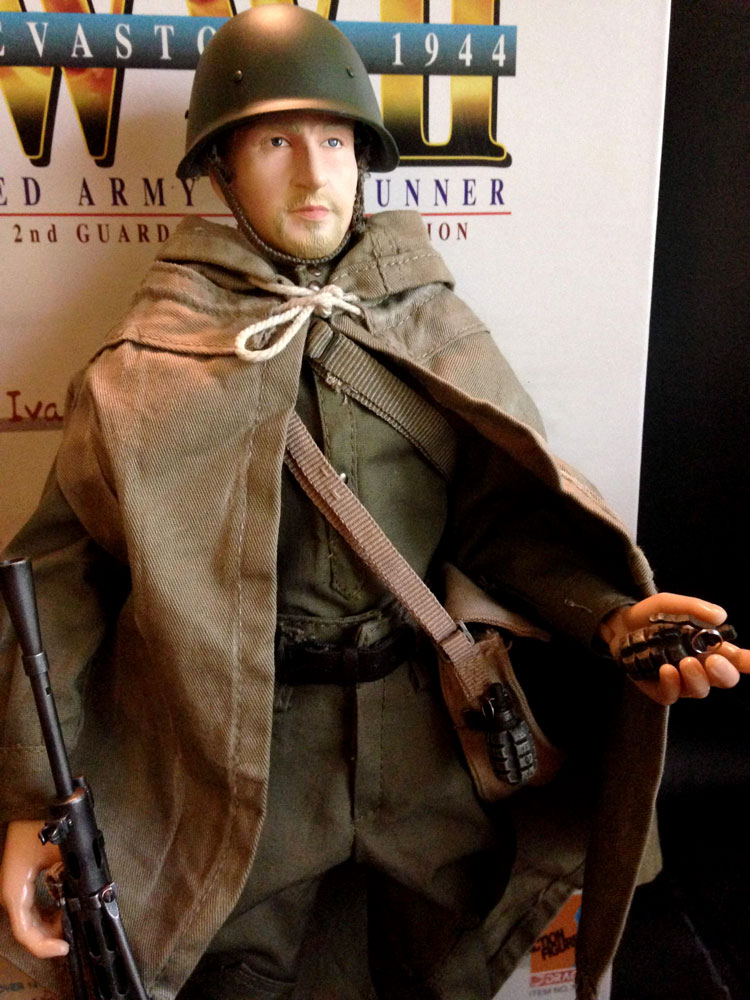 All right, and then, he comes with two grenades, which are really nicely detailed I think. I’ve got one attached onto this bag, then another onto his belt, so there is a look at that. And then, he comes with a nice leather belt as well, which I have strapped in here through these loops, and then he has a canteen on back. All right, and as for his uniform, he’s got these shoulder insignias, or shoulder pads here, they’ve got red stripes, looks good. Uniform is really cool. 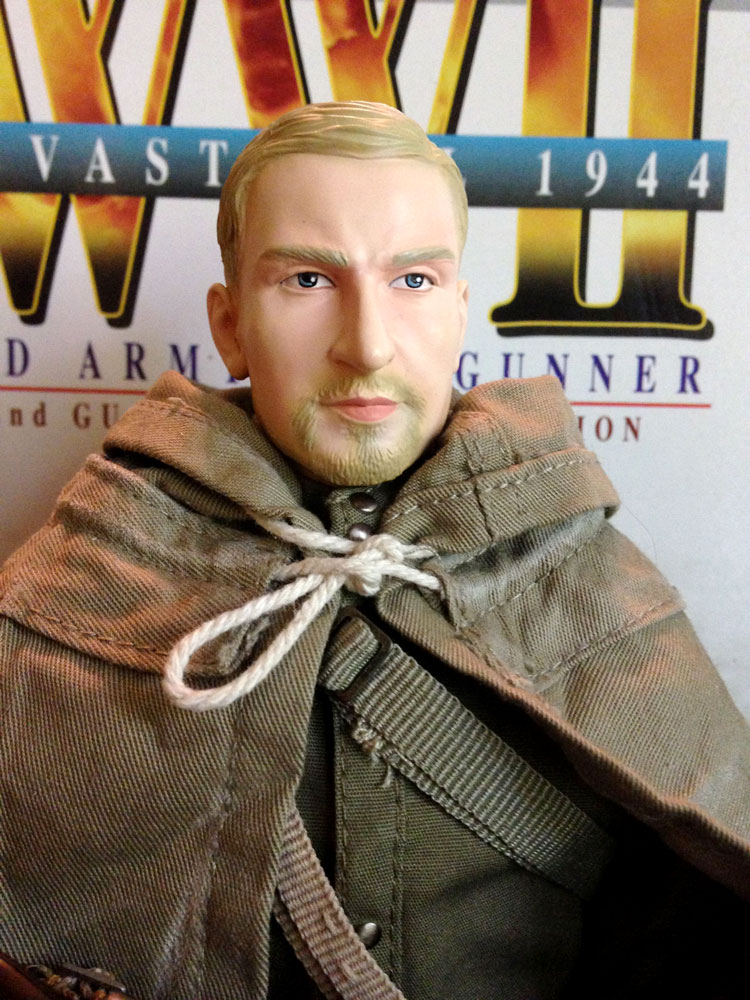 And, he does come with two medals, it’s called the Order of Glory Medal 3rd class, which I don’t have pinned onto him, but there’s a look at one of them. And, I guess you can just glue it on, or pin it over here like that. Okay, and he comes with this order little badge here, which looks really nice, try to get that in focus for you. I’m not entirely sure where that would go, I guess, just somewhere else on his uniform, but pretty cool.

Okay, so not much else to show. Here we’ve got his pants. And then, I really like his boots, I think they are very nicely detailed, especially at the tip, you can see they look pretty worn. So, great detail. Overall, the figure is really nicely detailed. Yeah, that’s everything to show. 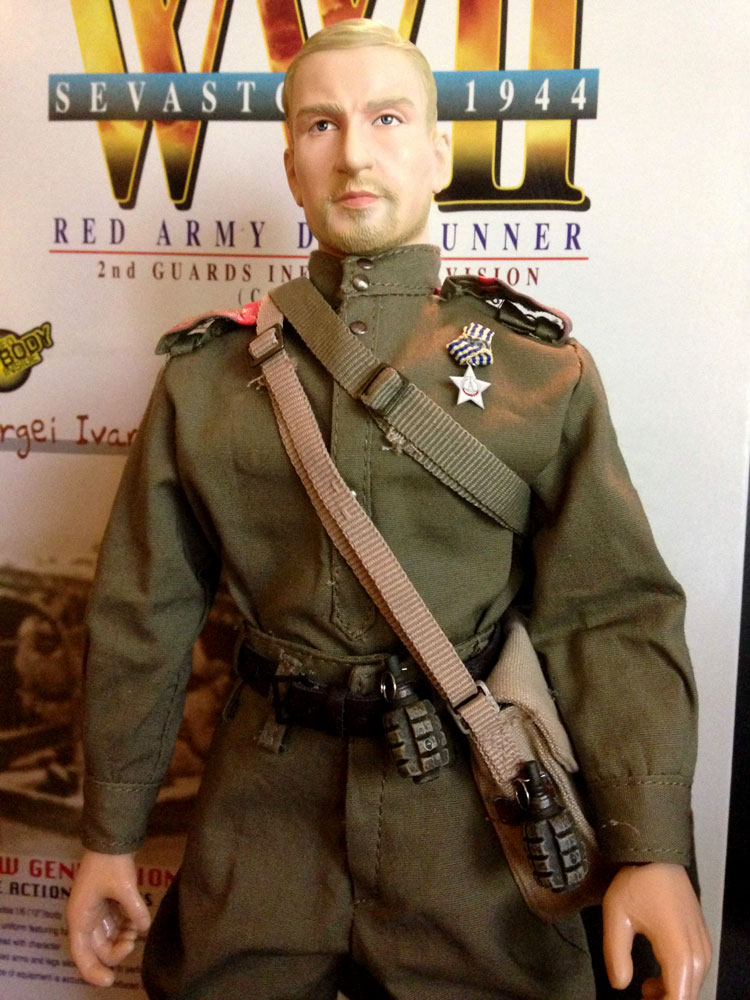 This is an awesome figure, I am so happy I was able to get him. I did pay a good amount, I paid like 90 bucks, but in my opinion it was totally worth it. This figure is really hard to find, and I can see why, he’s really nice, especially among the Russian figures, I think this is one of the best that they put out. So I hope you guys enjoyed this video, thanks so much for watching. And as always, I’ll see you in the next review. 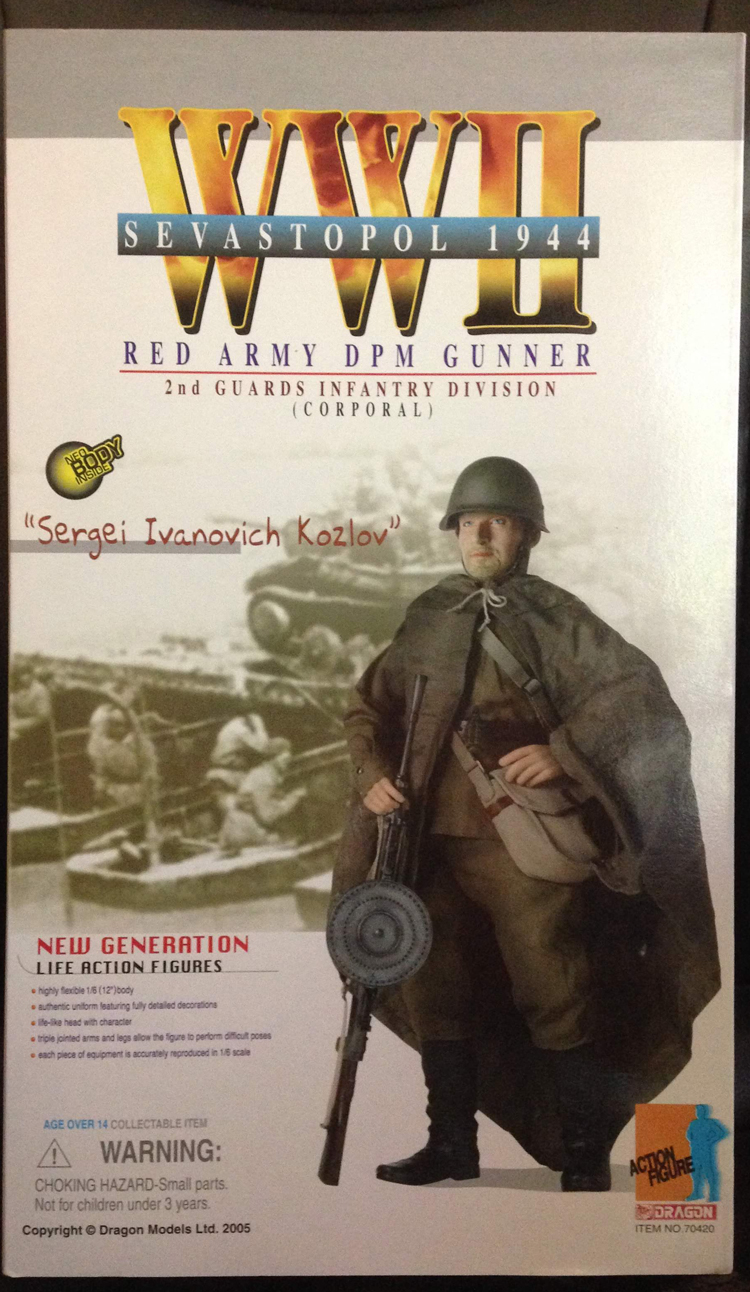 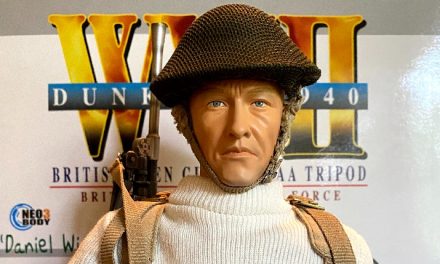 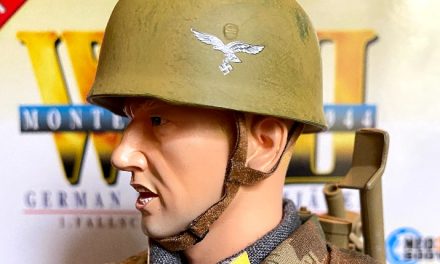 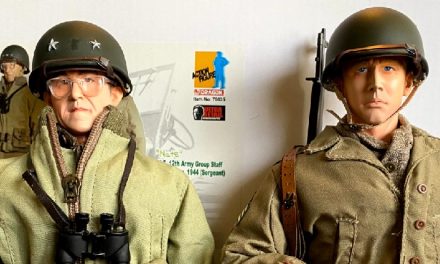