Hey guys. Welcome back to another review. Today, we’re taking a look at a very nice dragon figure. This is Charles West, a USMC rifle company NCO. So, let’s go ahead and check out the box. 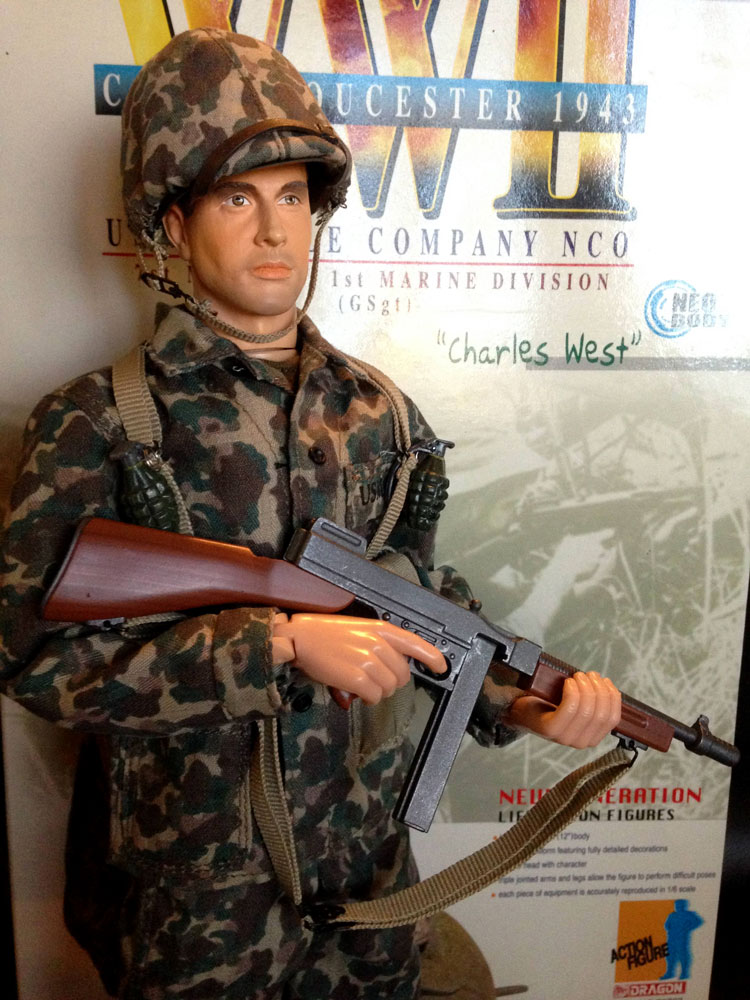 This is really a fantastic figure. One that I’ve been trying to get a hold of for a good while. He’s really rare though. I paid around $60-something dollars for him which I think is pretty good considering the rarity of him. Then, at the top of the box, World War II Cape Gloucester 1943 and I believe that stands for gunnery sergeant, I believe. There’s a really cool picture of the figure and as you can see, comes with a monkey which is really awesome. 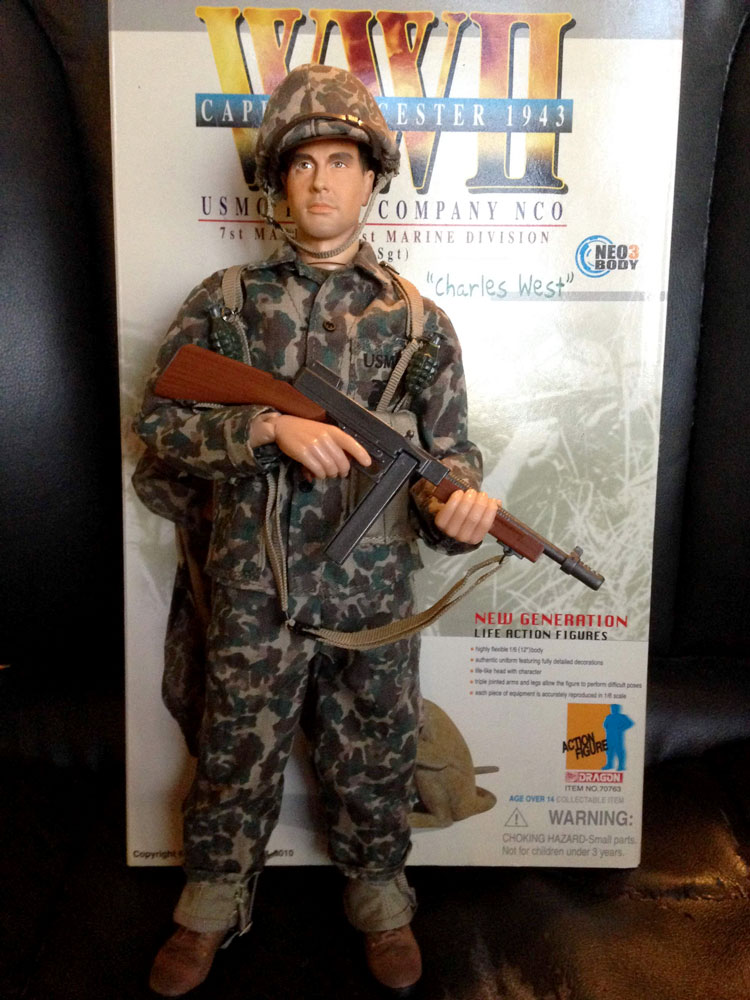 Here’s the back of the box. And, on the top, got another cool picture here with his monkey. Yeah. This guy was released in 2010, so this is one of their newer models which you can definitely tell by looking at the figure. This one looks very, very good. He’s really realistic. So, here he is.

All right. This is a beautiful figure. Already, he’s become one of my favorites. I just love the way he looks. His uniform is great. The Tommy gun. Everything about this figure is just fantastic in my opinion, and then here’s his monkey. I’ll show you that first. This is really well made. Good quality on this. Let me get that in focus. 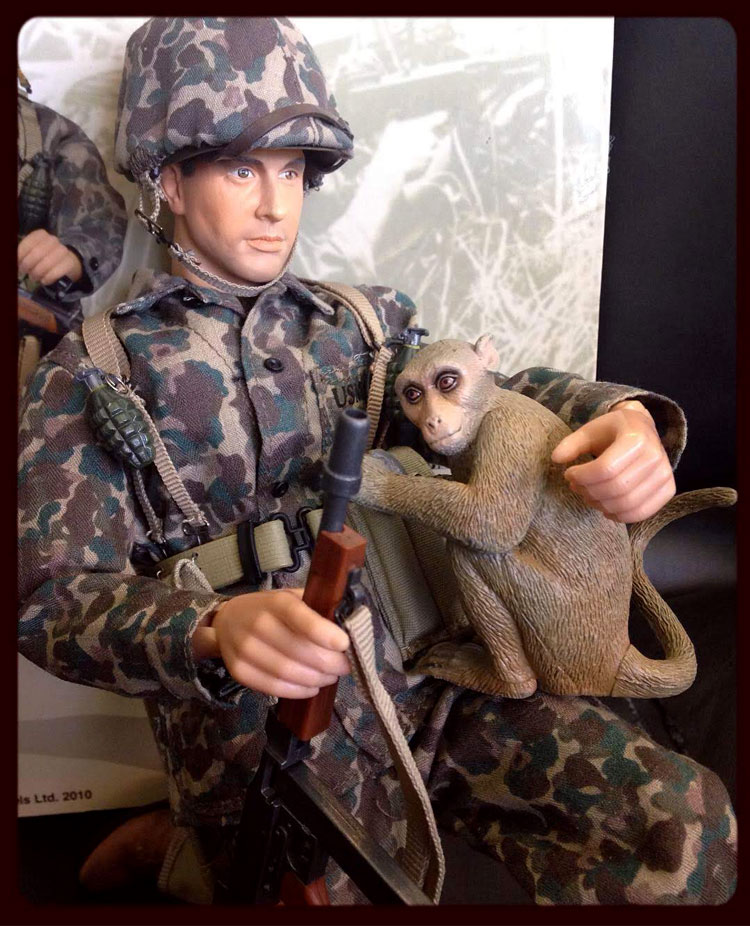 All right. Let’s take a look at his Tommy gun. He holds this really well.

Here it is up close. Really nice strap on there. You can take out the clip of course and you can pull this back, and the sites do pop up. So, awesome weapon. 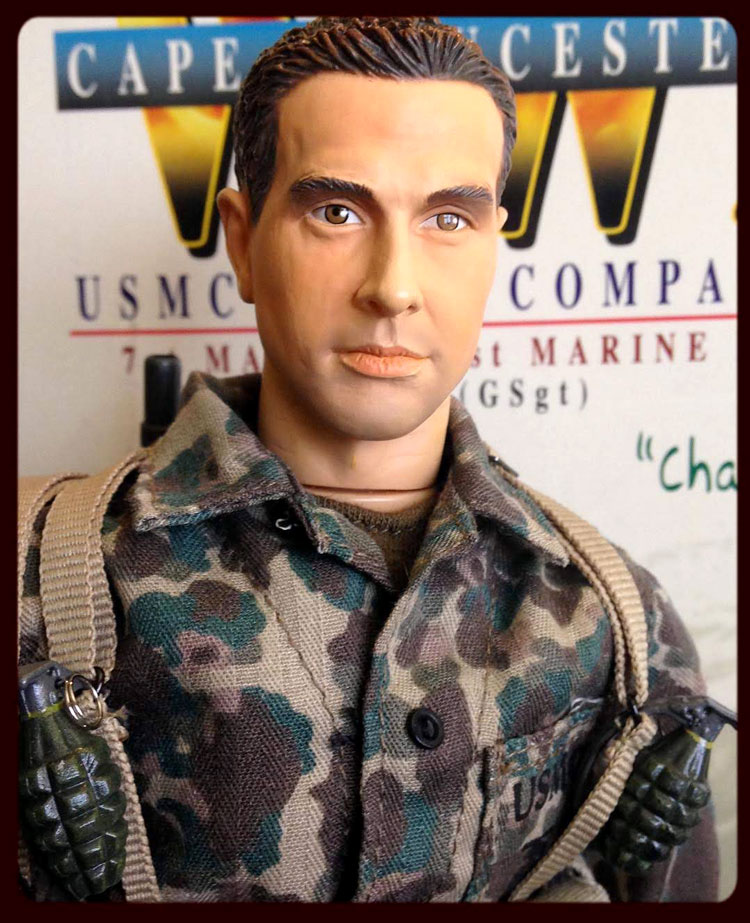 All right. His helmet looks great, and you do have to put the camo layer on there which is kind of a pain to do, but it looks great once you get it on there.

All right. Here’s the figure’s head sculpt which is very nice. I could tell right away that this figure is definitely based off of John Basilone from the Pacific. Really looks just like him, but I think they did a great job with it. It’s a very nice head sculpt. 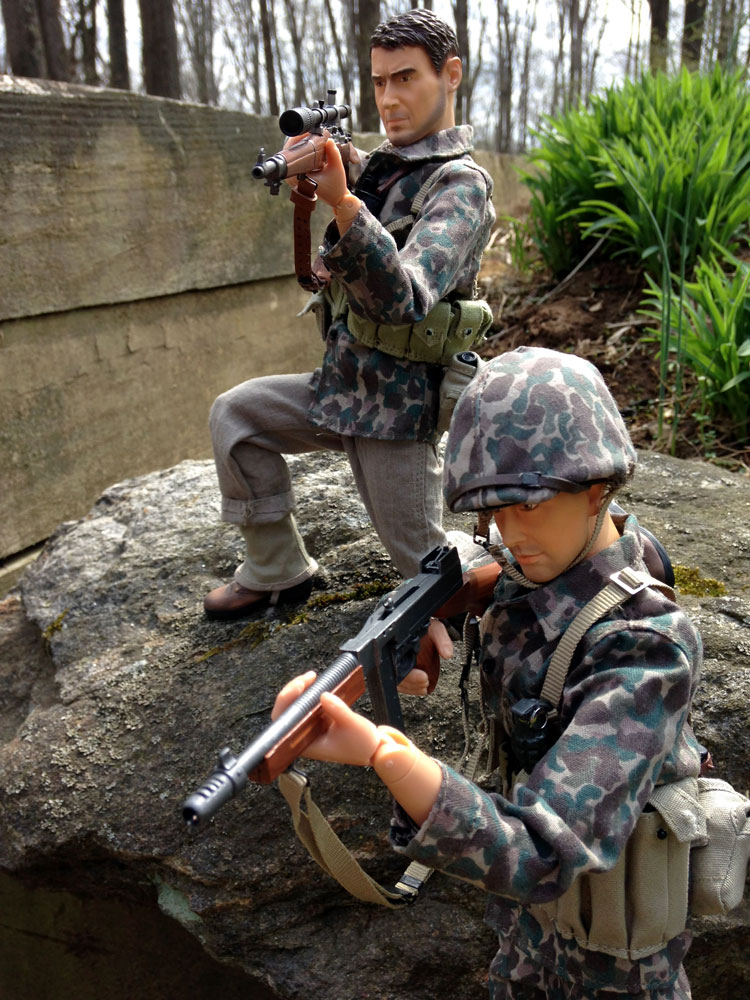 Okay. Moving on. Let’s take a look at some of his equipment. Over here, I have pinned on two frag grenades. Let me take one out. These are really good quality. I love that you can stick them over here. That looks great like that. Up front, we got five patches actually for extra clips and there are- Yeah. There are clips in each one of those pouches. Over here is another little pouch. On the back, we got his canteen which looks great. There’s his knife. Let me take that out for you. 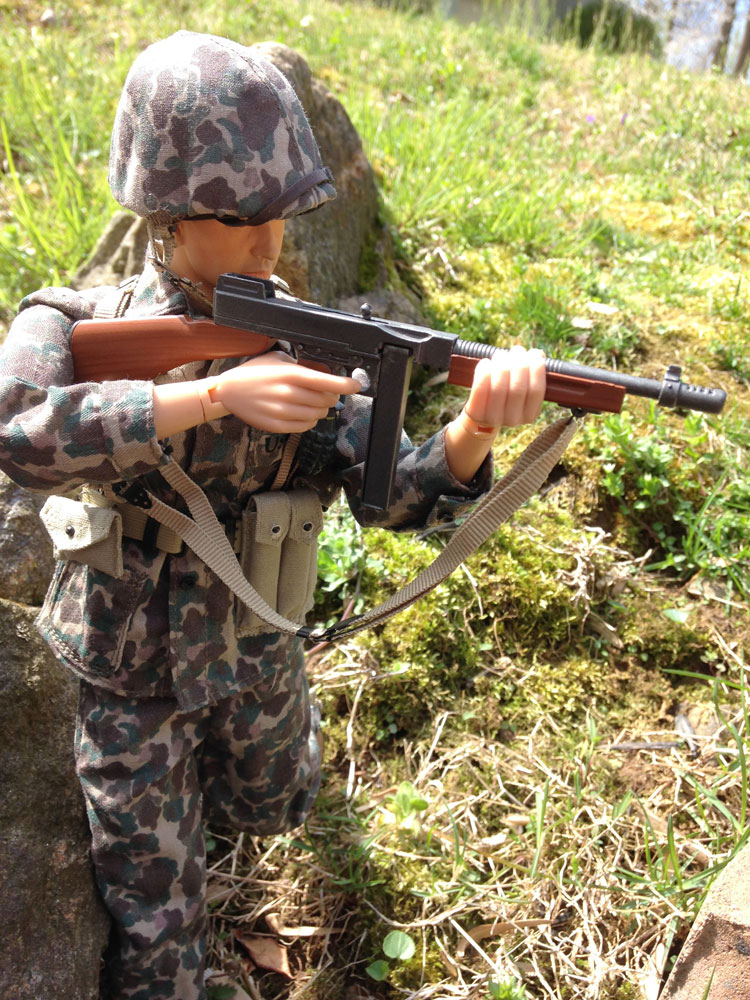 All right. We got another small pouch there, and then he does come with a machete which is really nice. Here that is. He doesn’t actually hold it all too well, but it’s still a very nice accessory.

All right. The uniform for this guy is really nice. I love the camo design for the shirt and then it’s the same for the pants, but I think that looks great. You do have to put the leggings on which is always a pain, but as always once you get those on, they look great. There are his boots. 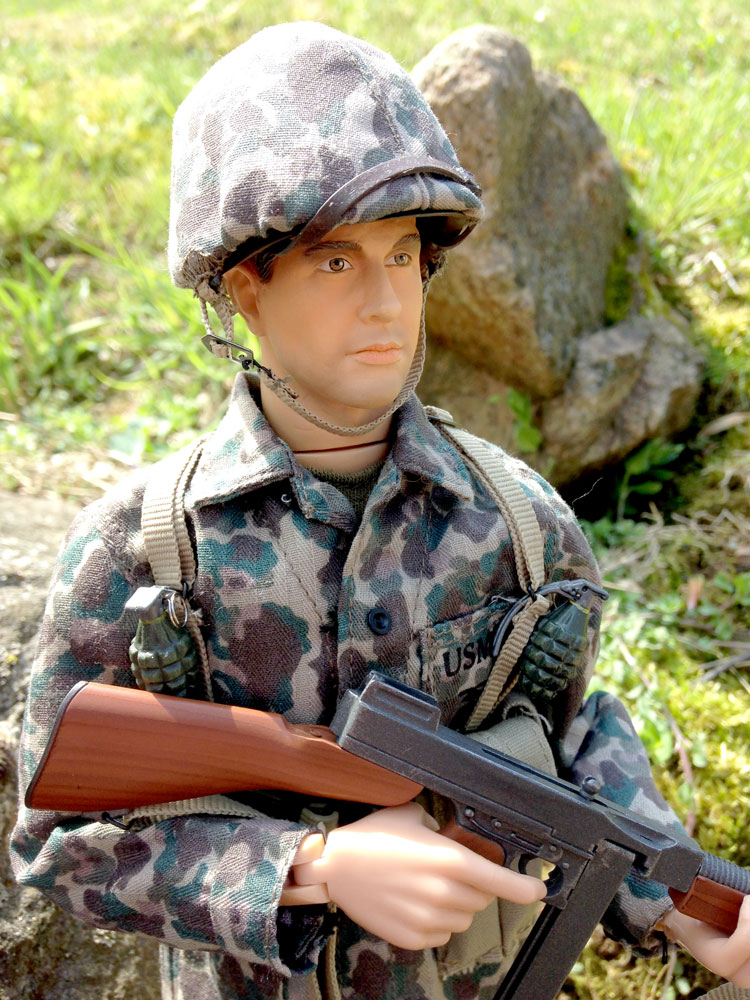 All right. And, I think that’s everything to show. As you can see here guys, this is a really beautiful figure and definitely one of my new favorites especially among the Pacific figures that I own, I think this ones my favorite. Just the quality is really good. You get a cool monkey here which is awesome. I love the little animals that some of these Pacific figures come with. The head sculpt is great especially because it’s based off of John Basilone, and everything else is just great with this figure. So, I really recommend picking this one up if you go find him. A top notch figure. Thanks for watching the review guys, and as always I will see you in the next video. 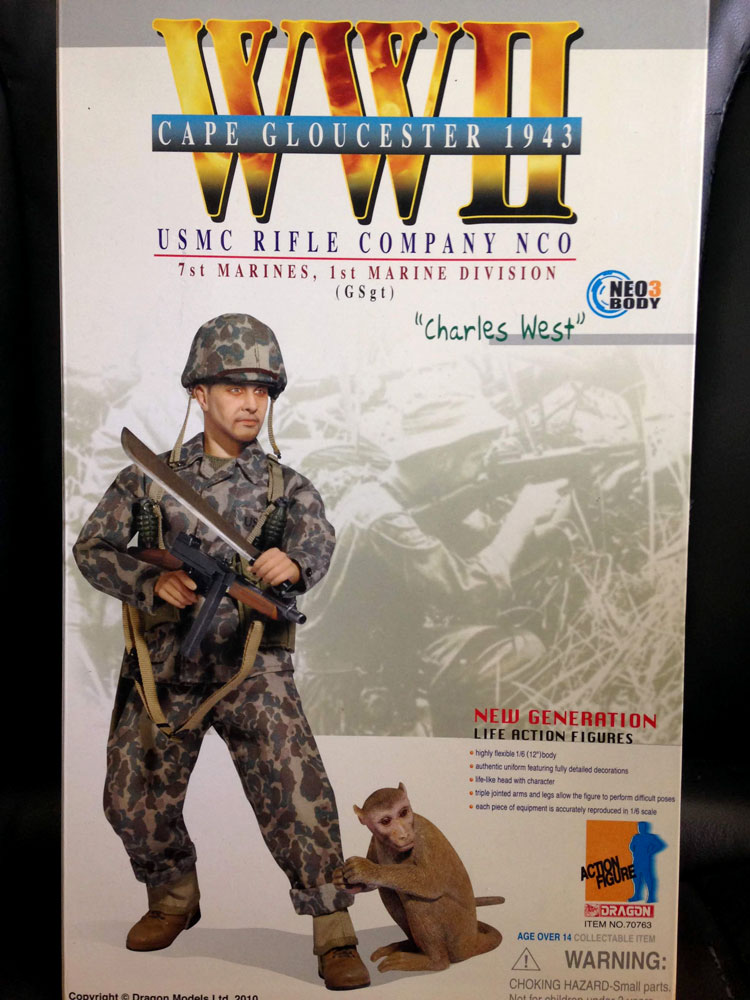 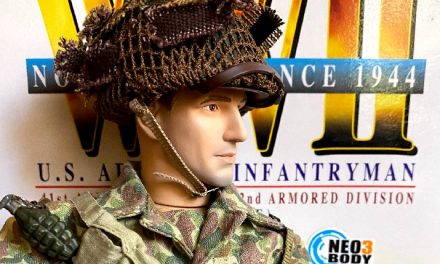 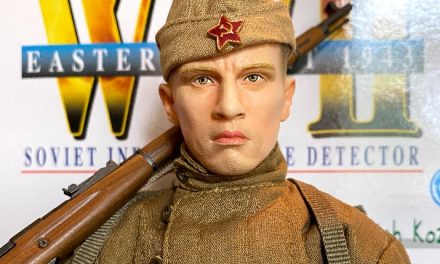