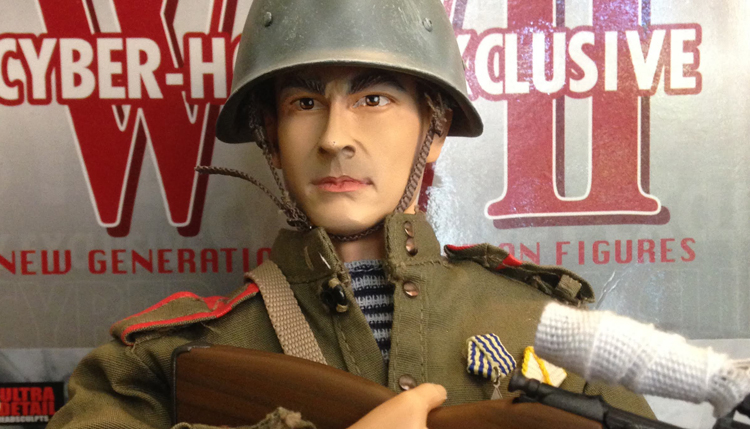 Hey guys, welcome back. Sorry for my absence. I was away on vacation for a little while. I just got back on Sunday so I’m still adjusting back to routine and everything. So that’s where I’ve been. But yeah, welcome back. 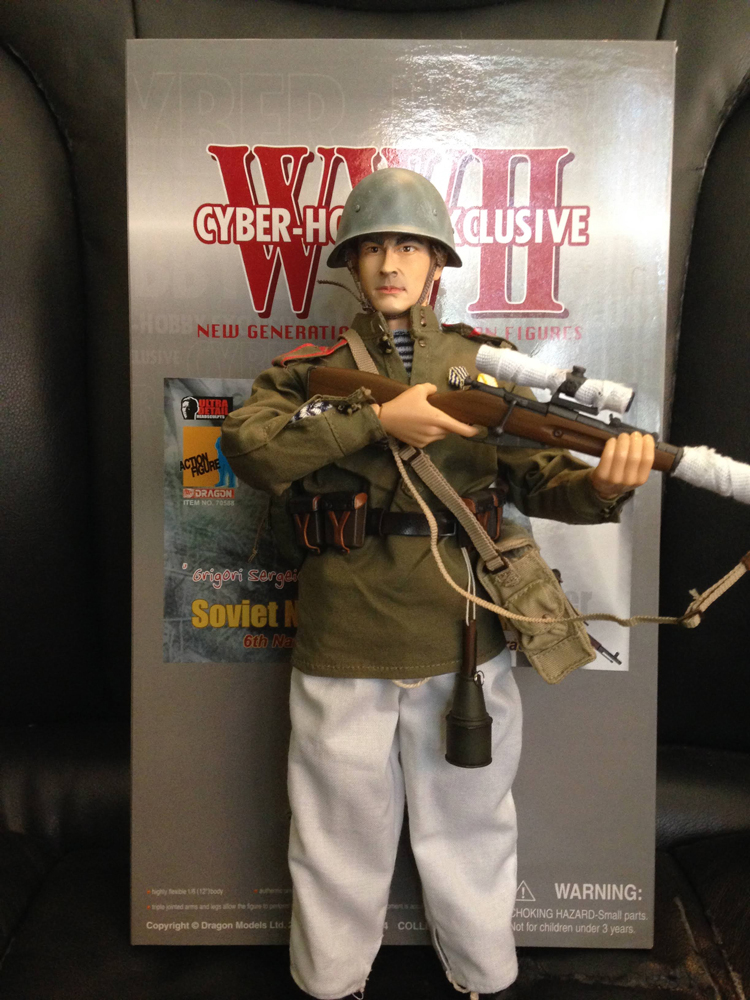 I’ve got a really interesting and awesome figure to show you guys today. He’s a cyber hobby exclusive World War II figure. This is my second one that I’ve been able to pick up. He’s really awesome. His name is Grigori Sergeievich Sokolov, and he is Russian. It’s hard to pick up a Russian figure, so picking up a cyber hobby Russian figure is even more difficult to do as you can imagine.

This is a really hard one to track down. I saw him pop up on eBay about a month ago I think, and I just, I went all in. I ended up paying I think 90 bucks for him, which I think was totally worth it. That was the first time I’ve seen this guy listed on eBay and I was really, really excited to win the auction. 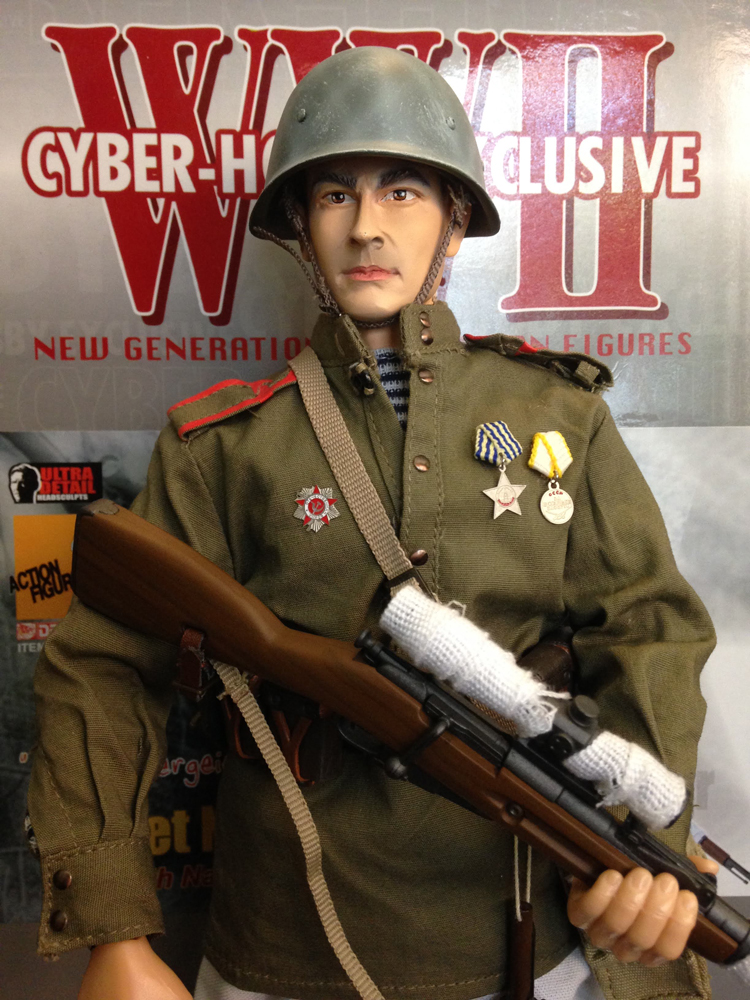 Let’s go ahead and look at the box. It’s really nice. We’ve got a small little picture here of Sokolov. He is a corporal from Leningrad, 1943. And there’s a picture of him. He’s a Soviet Naval infantry sniper, so a really unique figure. I’ve never seen anything really like this before.

Not really much else to show except for the inside of the box. There is a little collectible card that you get with these cyber hobby figures. So you can see a little picture of the figure there. So that’s the box and let’s bring out the figure now.

Here he is. He’s super awesome. I was really impressed with him, especially the the sniper rifle. The wrappings on there just look great I think. All right, so let’s go ahead and look at his sniper rifle in more detail. So he holds it really well. Okay, here it is up close. You’ve got a nice strap on there, and you can pull this back. It is a little … it’s pretty delicate there, so I try not to pull that up too often. 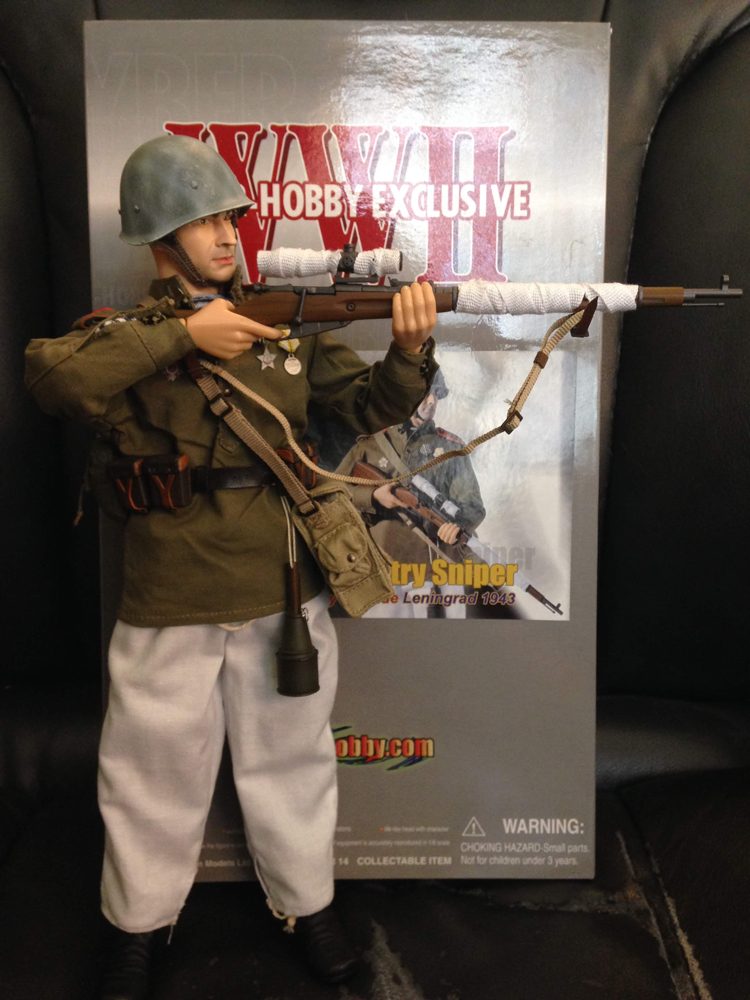 But yeah, the main attraction with the sniper rifle is the snow wrappings that you get with this; really nice, and you do have to put that on manually. It wasn’t too hard to do, and I think it looks really great. Yeah, you put it on the scope as well, and you can take the scope off. All right, so that’s his weapon, really, really awesome. Very impressive I think.

All right, right now he’s wearing his helmet. He does come with another hat, which I’ll show you in a second, but his helmet is really nice. You can see it’s got the white camouflage on there. Okay, so here’s a better look at that, super nice. I’ve never really seen anything like this on a Russian helmet, so very unique. 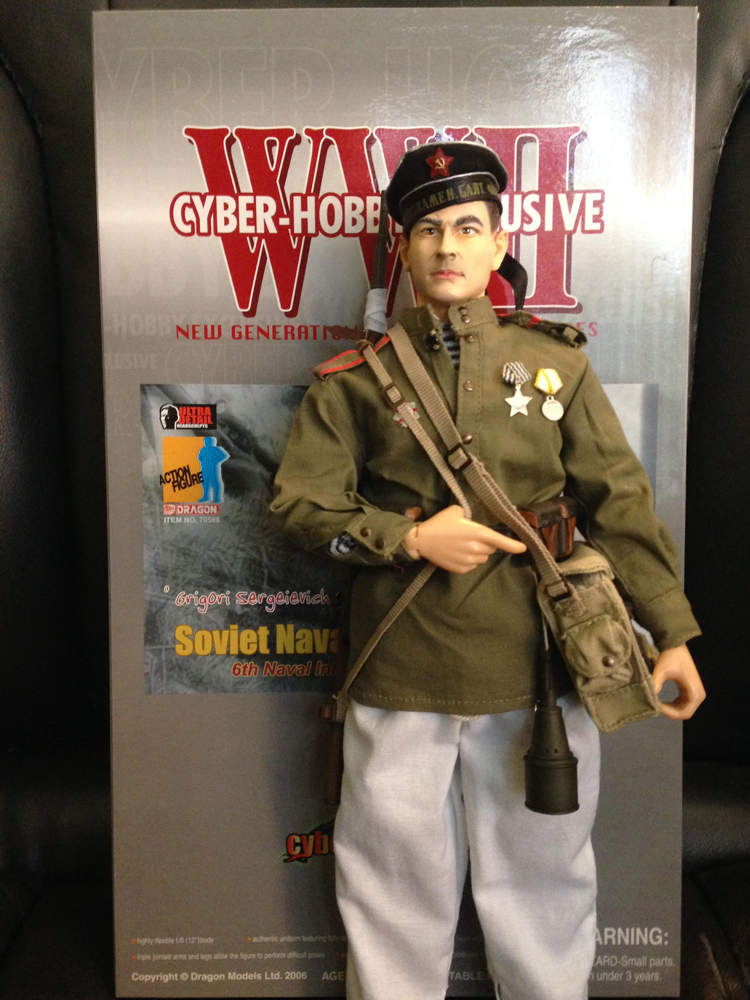 And there’s the padding underneath. Okay, and here’s his other hat or cap, whatever you want to call this. It is his naval cap and it’s really nice. It fits really well on his head as well. I think it looks good. So there’s a look at that. You can get some good poses here with his sniper rifle. If you want to, you could do something like that. It looks really awesome I think.

Here’s a look at his head sculpt, which is very nicely detailed. I think this one looks good. Unfortunately, the hair is a little chipped on the top there. It’s how it came. I’m not sure how that happened because he was brand new in the box. But yeah, a cool looking head sculpt. I like this one a lot. He’s got very sharp features. 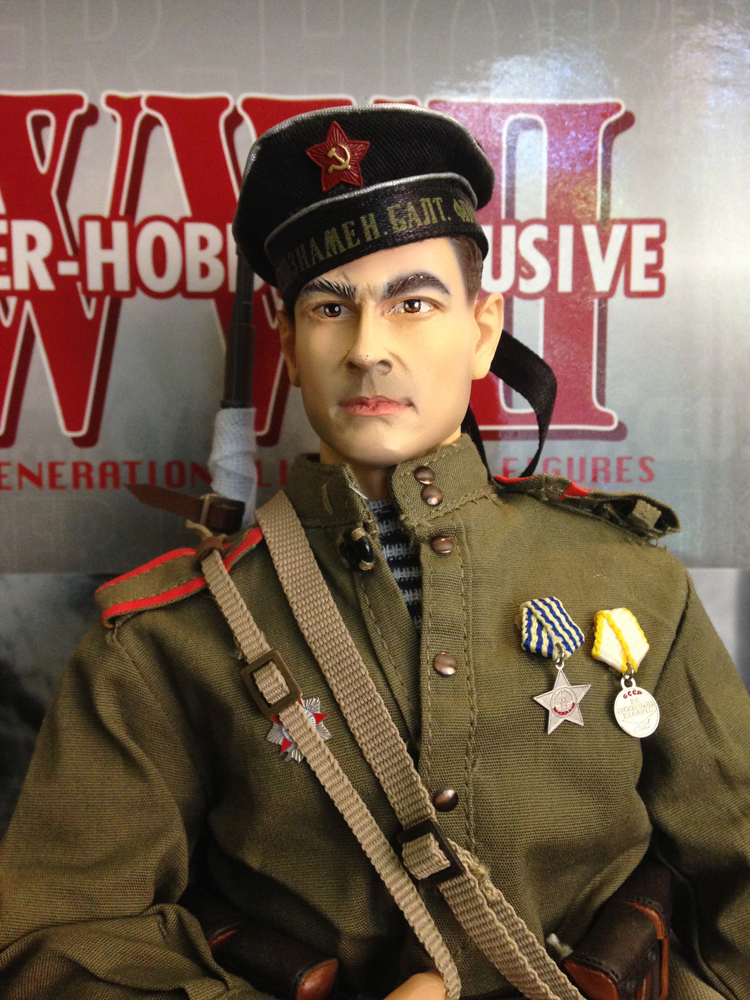 As for his uniform, I think it looks nice as well. I love all the medals that he comes with. You do have to glue those on … at least I did for two of them. One of them stuck on immediately, but the other twos ran out … or not ran out, but the stickiness expired so I had to glue those on. But I think they look really good.

All right, he’s got this bag here, and then he’s got pouches here for ammunition, I’m assuming. He does have a grenade here hanging off his belt. That’s really cool. And then a nice belt as well. I like the belt a lot, so very sturdy, I think. And he’s got his canteen in the back, and then we got a knife, or almost a small bayonet it looks like. That’s really nice.

So everything was pretty easy to put together. I didn’t have any issues. Then we got his shirt or tunic, and got the red shoulder pads on there. It looks really good. And then underneath of this you can see he’s got his naval shirt. Okay.

As for his pants, right now he’s wearing his snow pants, which weren’t too hard to put on. And underneath that he does have a matching pants for his shirt or tunic. I can briefly show you that I guess. Okay, so you can see it under there. And then lastly, we’ve got his boots, which are also nice. All right.

All right guys, so that is a Grigori Sergeievich Sokolov. A pretty a wordy name there, but this is an awesome figure and I do recommend getting him if you can find him. Very hard to find, and I think I just got lucky. I did pay a lot for him, but I think he was definitely worth it, considering how nice he is and considering how rare he is.

So I hope you guys enjoyed this video. Thanks so much for watching. I’ve got a lot of other figures to review, so stay tuned for those and I’ll see you then. 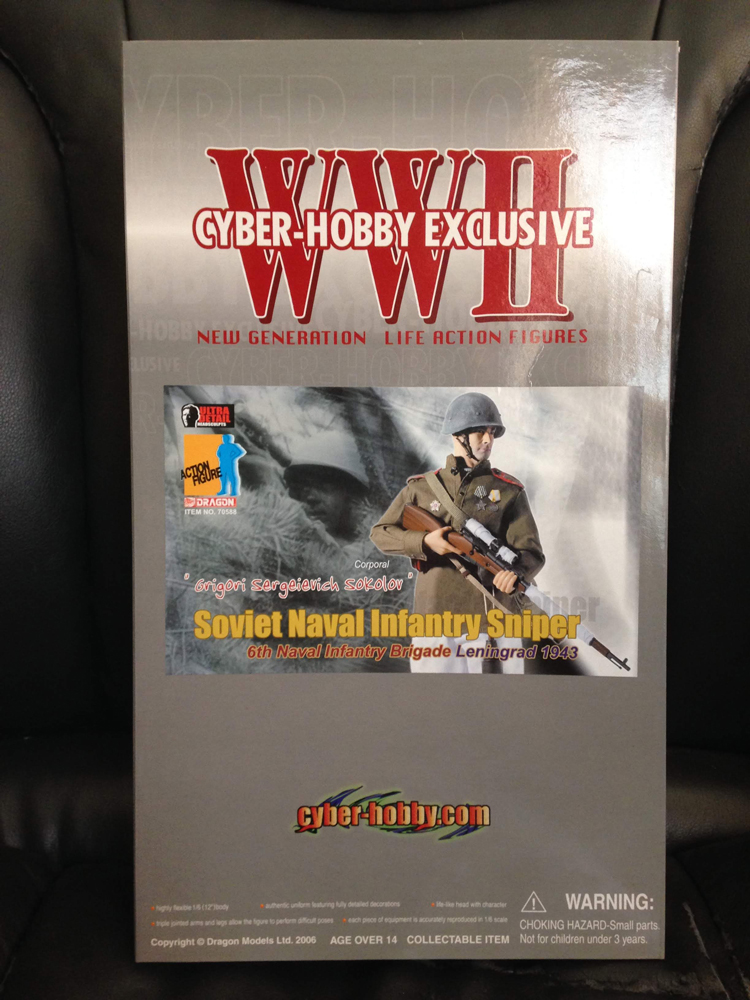 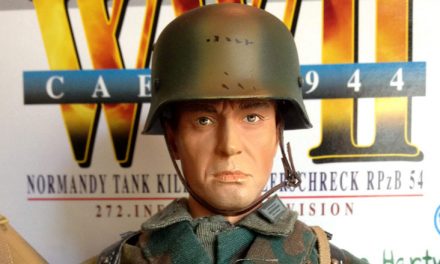 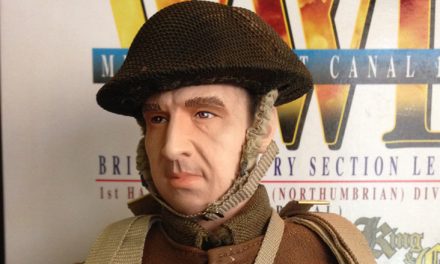