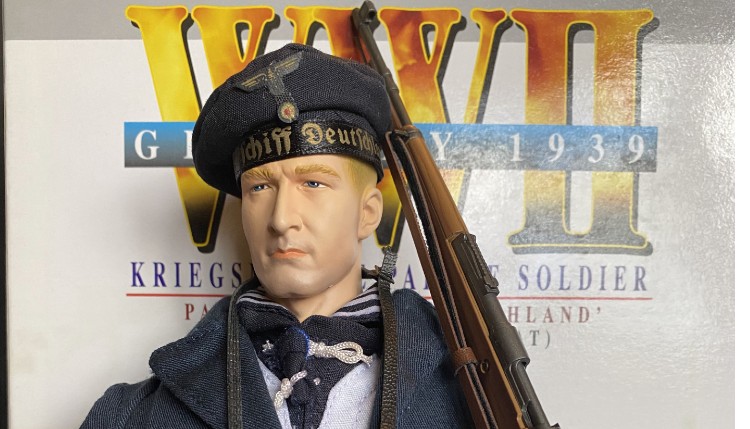 Hey, everyone. Welcome back to another video. Let’s go ahead and get into this review. I am reviewing a German figure today. His name is Victor Oerhn. He’s a Kriegsmarine parade soldier, and he’s pretty similar to Eric, another Kriegsmarine figure that I reviewed a few months ago, but he’s from Germany, 1939. So an early war figure, and he’s really cool. So let’s go ahead and look at his box. 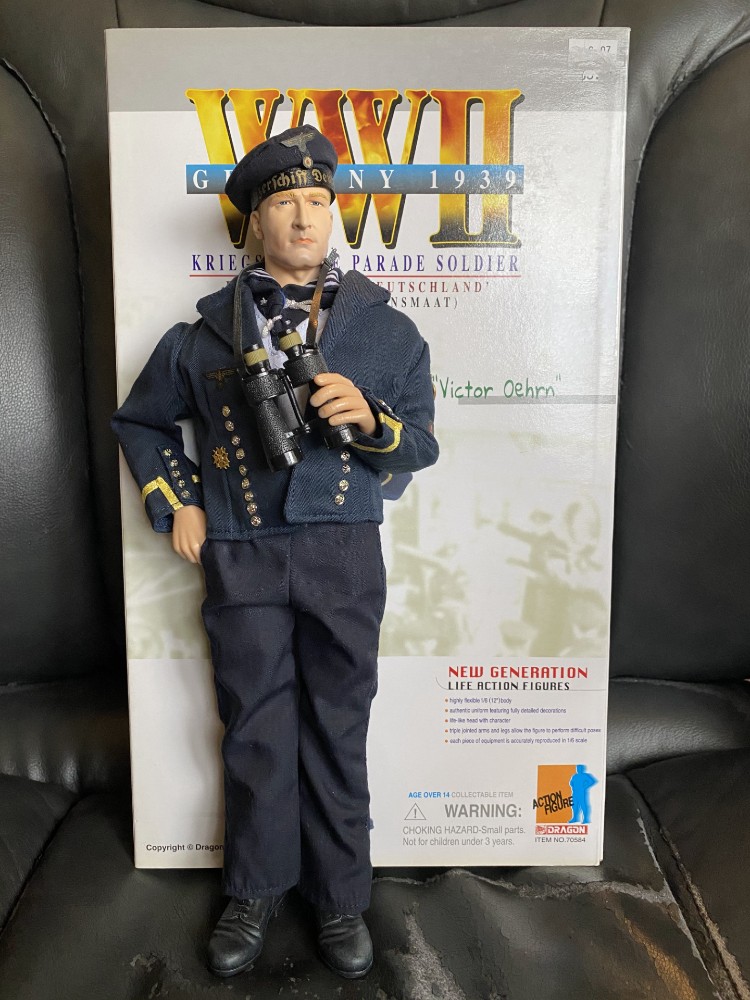 There’s a picture of him. And this one is he’s a bit on the rare side. So a little hard to track down. Very happy to have him. I paid about, I think about $70 for him, if I recall. Picked him up a few weeks ago now, which I felt was a pretty good price for him. Here’s the back of the box. You can see his equipment. This one came out in 2007. And inside I did leave a lot of stuff in here actually. So you can see his belt there and bullets, and also the pouches for the bullet strips. Okay. You can see another uniform there that I don’t have him in, similar to the other Kriegsmarine, Eric Spiegel. This guy comes with… You can do several looks with him, but here he is. Oops. I’m attempting to have him hold his rifle here like this. 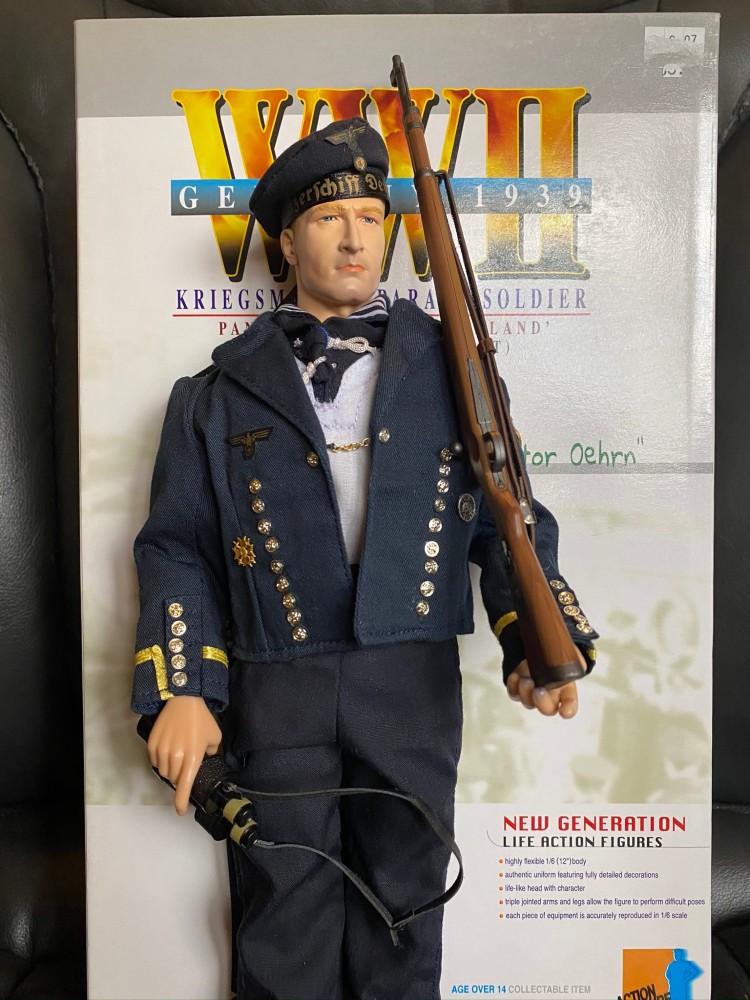 So a really beautiful German figure. I really like this one. I think he’s very realistic and I just love his uniform. So right now he’s got his Kriegsmarine parade dress tunic on, which I prefer this look myself. So that’s what I’ll keep him in. Yeah, if you wanted to go for another look, you could put him in just his other Kriegsmarine uniform there, or you could take the jacket off and just make it more of the white underneath. But anyway, I’ll show more of that later on.

For now, let’s go ahead and look at his rifle. Okay, so here it is. Nothing really new here to show. Standard Dragon German rifle here. Same details. You got the strap, which can be adjusted. You can pull that back. So nothing new there really, but let me go ahead and just get it in his hands for you. So there he is holding it and he holds it very well. All right. So that’s the only weapon he comes with. This is definitely more of a… I mean, he’s a parade soldier, so not really any weapons here except for the rifle, really, but I really like his binoculars. These are nicely detailed. Here he is. Let me put it around his neck. And there’s a look at that. 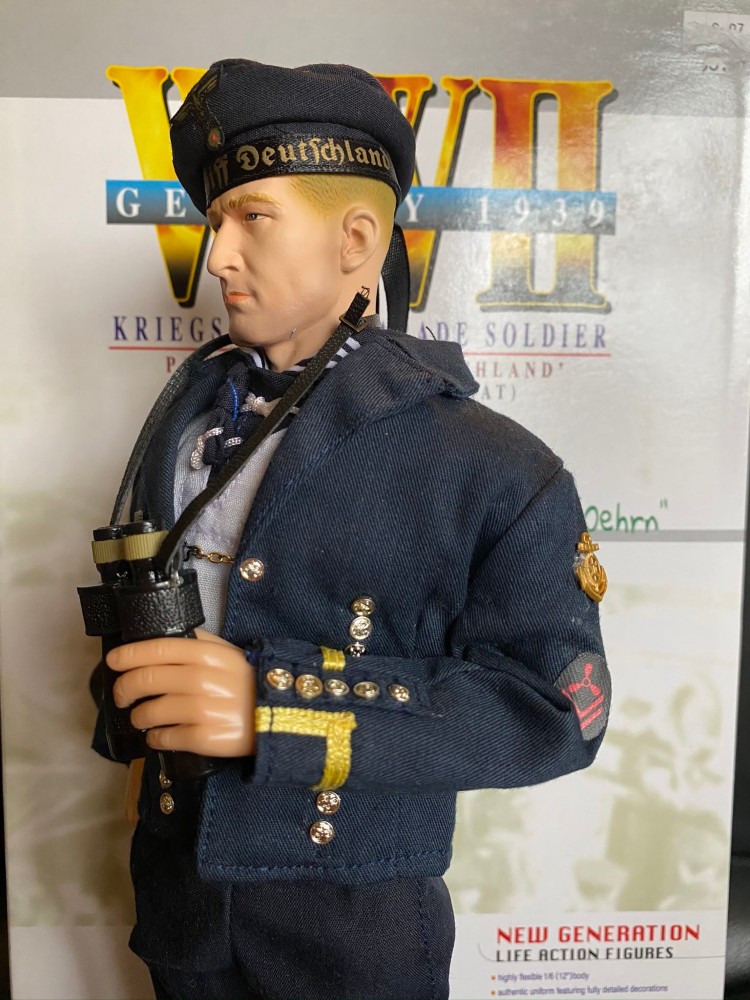 Now let’s take a look at his head sculpt and his Kriesgmarine cap. All right. So, that looks really awesome. The hat fits really well on his head, you do have to position it slightly to get it to kind of shape into his head there so it’s not poofing up awkwardly, but I think it looks really nice. Fits very well. All right. We’ve got a pretty interesting head sculpt on this figure. I really like it though. Very realistic, especially the hair. That’s very, very interesting hair on this figure. I like how it’s kind of coming in front of his face, like that. Never really seen that before on a head sculpt. So definitely a unique head sculpt here. 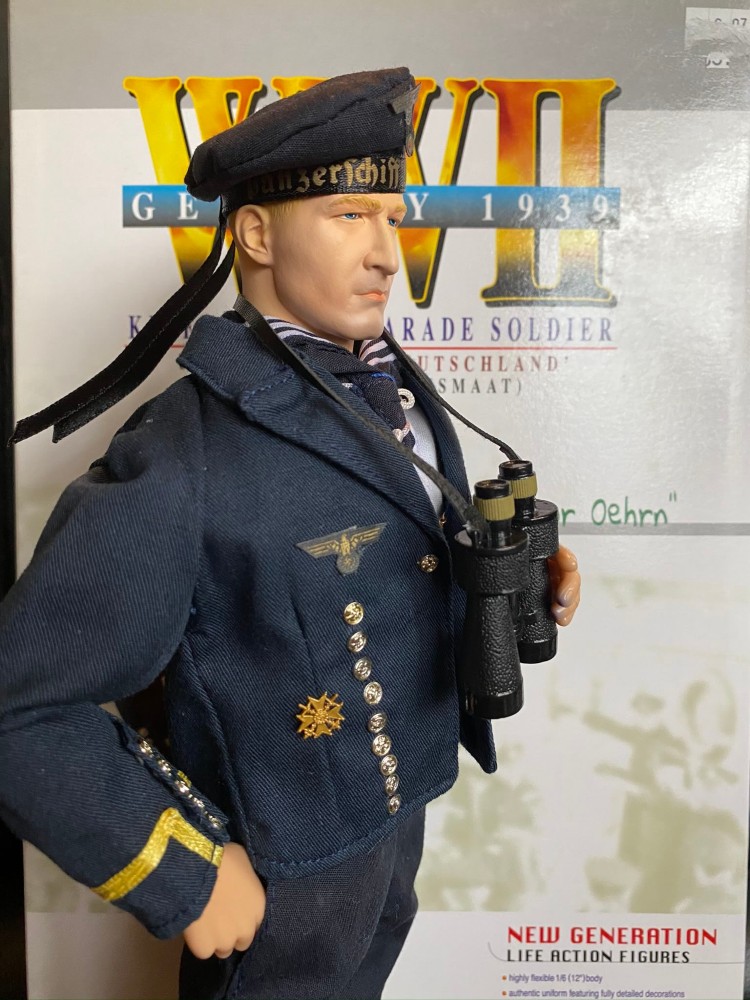 Moving on, as I said, right now I’ve got him in his parade dress tunic, which I prefer this look. I think that looks really awesome. A really beautiful dress tunic here. I love all the buttons on it. Get a better look at those. Again, there are a lot of badges that you have to glue on here. So we got one down here, another here. Okay. I’ve got a sticker and another one up here. So with these badges, I don’t actually… They do come with little pins that you’re supposed to pin into the jacket, but I personally think that’s just a lousy design. I tried to do that once and I ended up making things worse. I ended up breaking the badge. So I think that’s a really crummy design on Dragons end so I just clip off the little ends and I glue the pins or the badges right on, which I think it looks just as good. 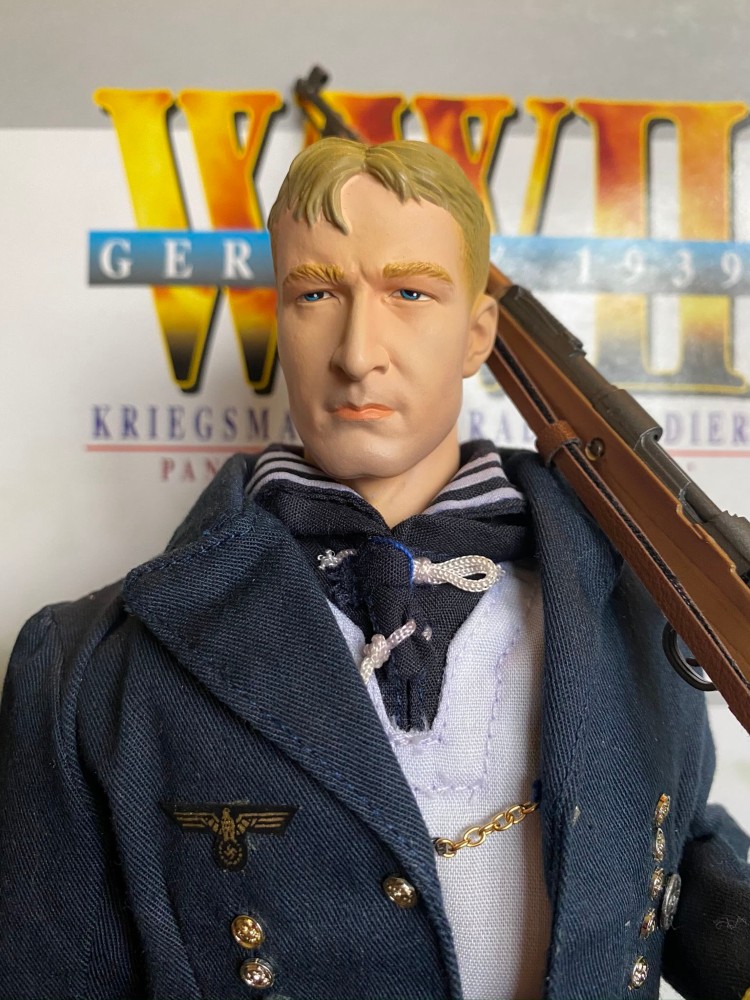 A buddy of mine recommended that a while ago and I’ve done that ever since. So if you don’t like to glue stuff on the figure, then I understand that, but honestly, I think for these badges, then it’s definitely a better way to do it. Definitely an easier way to do it, so.. But anyway, really awesome dress tunic. I love the little chain there that clips it together. You can see underneath his white uniform. And as I said, if you want to go for another look, you got really three looks you can go for here that you can do the dress tunic, just the white shirt or also the dark blue one.

Got his boots and then his pants, of course. So, and then that’s everything to show for the figure. All right. So this is a pretty simple figure, but he’s really beautiful, guys. I definitely recommend picking this one up if you can get him, if you can find him, that is. He is pretty hard to get a hold of. So, but really, really nice. All right guys. Well, I hope you enjoyed this review. Thanks so much for watching as always and I will see you next time. 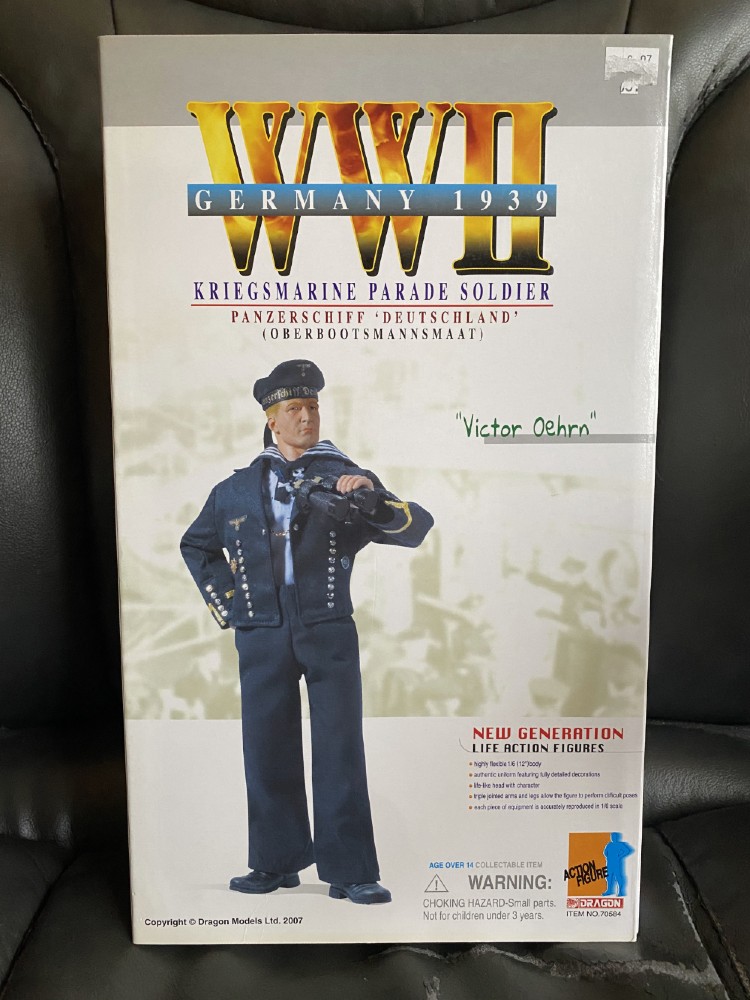