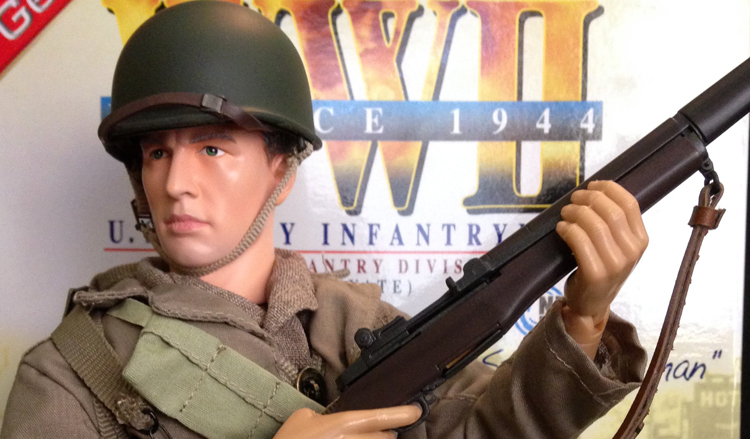 Hey, everyone. Welcome back to another review. Today we’re taking a look at a fantastic figure by the name of Steve Hartman. He us a US Army infantryman from France, 1944. This is another Gear Plus figure, so it comes with just a ton of extra accessories. But let’s go ahead and look at the box. We got a great picture there of Steve Hartman. Okay, at the top, you see the Gear Plus symbol there. On the side, we’ve got another picture of him. You see he’s holding his grease gun. The figure does come with two weapons, which is really cool. All right, here’s the back of the box. The release date on this figure was 2009, so one of their later figures, or somewhat later, I would say. 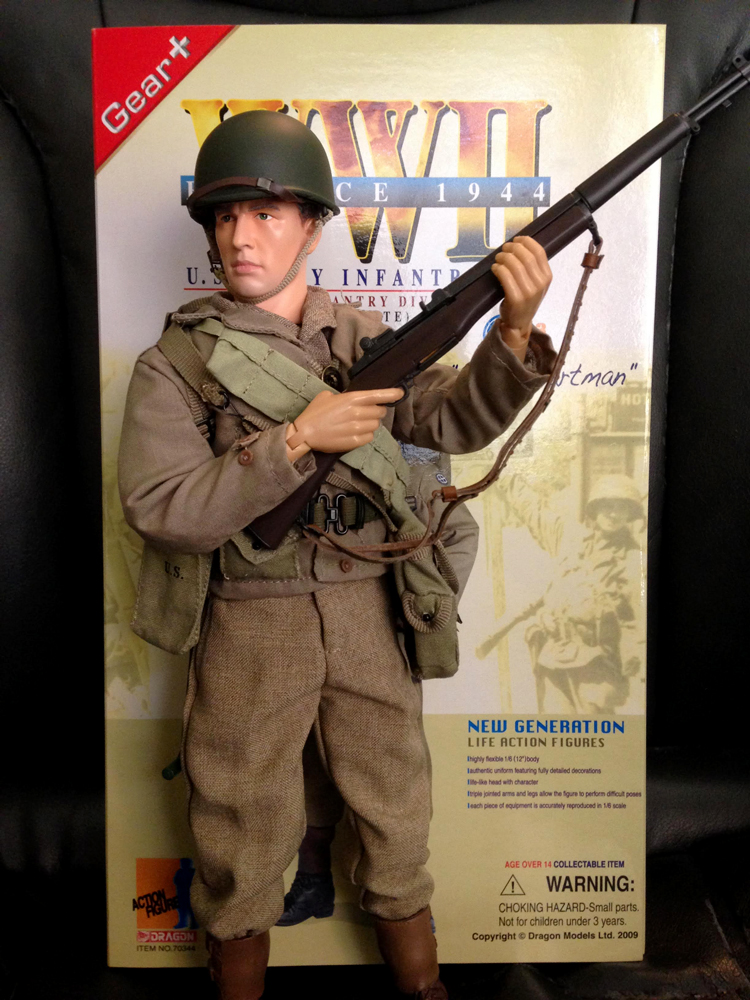 Well, let’s go ahead and look at the figure now. Here is Steve Hartman. He’s a really great figure, and he is very difficult to track down, as is the case with a lot of the Gear Plus figures. But this guy is very difficult to find. It took me a while, but I finally picked him up. I paid around, I think it was 77 bucks, which I consider a good price, considering the rarity of this figure. He usually goes for more, from what I’ve seen, so I was pretty happy with that price. But he’s a great figure. Pretty standard US soldier, but I think he looks great, and obviously he comes with a lot of stuff.

Here he is. Oops, his strap popped out there. All right, so I’ve got him holding his M1 Garand right now. Let me take this out. It’s a little delicate. As you can see, the strap pops out a lot. You might have to actually glue that little peg inside of the hole, because it keeps popping out. But this is one of the Garands that you can take apart. It comes in three pieces here. You can see I got some bullets in there already. 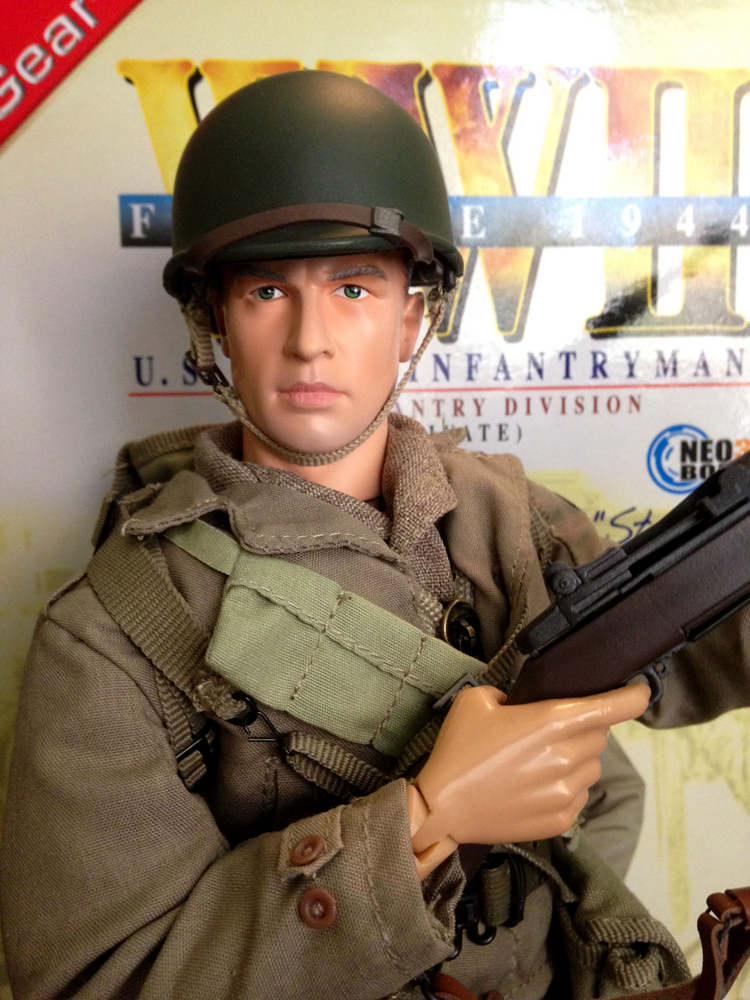 Then his other weapon is the grease gun. It actually looks like the strap … Never mind, no. The strap is still on that one. A good weapon here. Don’t see this one a whole lot. You can pop that flap open, and then of course the clip comes out. And he comes with a ton of extra clips for this. Well, not a ton, but three extras. All right, and here he is holding the grease gun. That looks great. It’s a cool little weapon. Like I said, you don’t really see it a whole lot. At least, I only have two figures with it, so it’s nice to get another figure with it.

Okay. Some other accessories that I have here that I didn’t actually put on the figure yet. Comes with this … I guess it’s a sleeping roll. But you’re supposed to attach this onto his back somewhere and kind of fold it like so, I believe. But I haven’t gotten around to doing that. Then he comes with this pouch here, which I also haven’t put on the belt yet, but it’s got a ton of extra clips for his M1 Garand. And then I’ve got his knife as well. 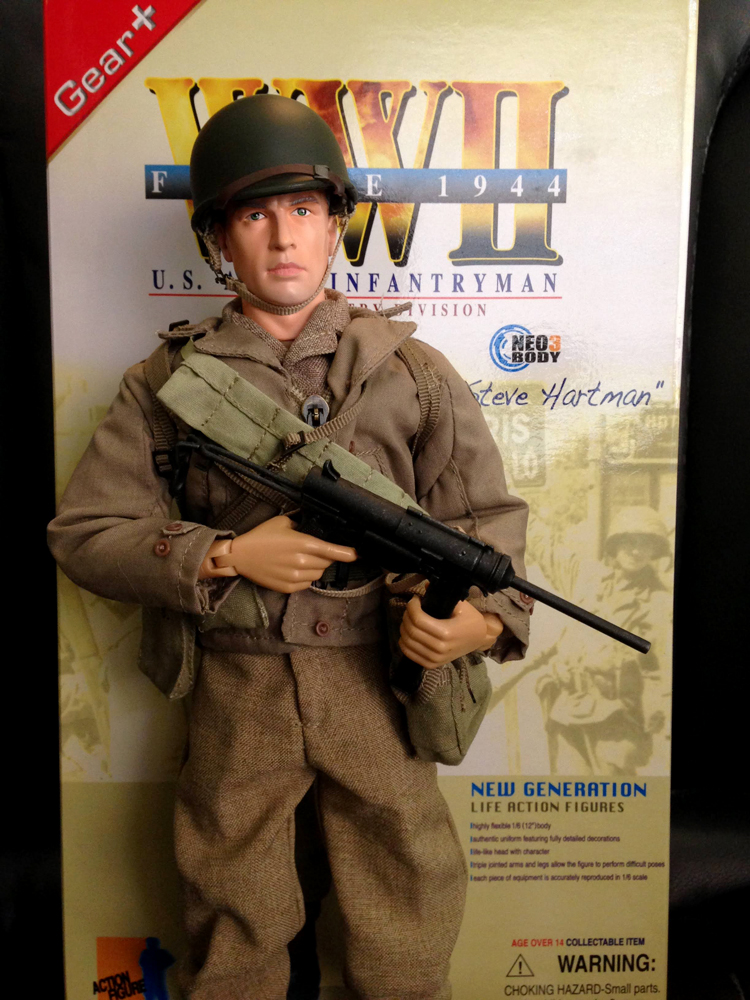 Let’s go ahead and take a look at his helmet and his head sculpt next. He’s got one of these metal helmets, which is really cool. Don’t see a whole lot of US figures with the metal helmets. Definitely on the rare side, I would say. Here’s a look at this. Really nice. The only problem is, this brown strap that goes on the front of the helmet there doesn’t fit too well, so it kind of bulges up. Oh, well. And here is the figure’s head sculpt, which is a nice one.

Not sure if you can tell, but he’s got green eyes, which is pretty cool. You don’t see a whole lot of figures with green eyes. Unfortunately, you can see the helmet has chipped his hair in the front. That’s my only problem with the metal helmets, especially for the US soldiers. A lot of times it will chip their hair if it stays on too long. It’s unfortunate. But a great head sculpt for the figure. 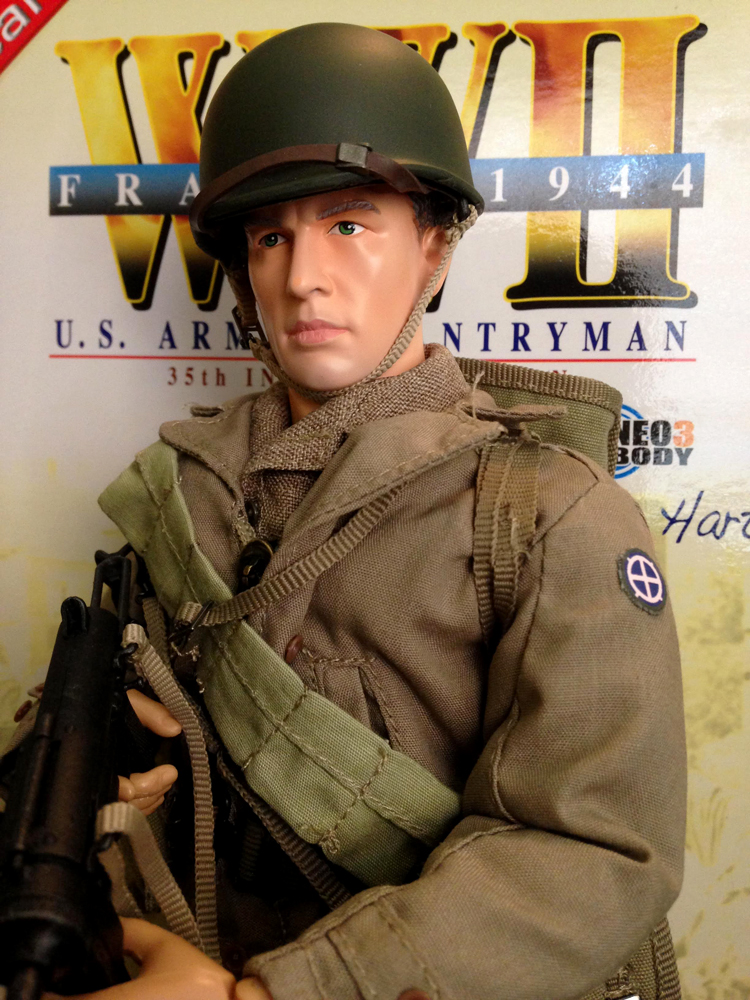 All right, let’s take a look at some of his equipment here. He comes with a ton of stuff. You can see he’s just packed with stuff on the front, and in the back. He’s got this bag here, which I don’t have anything in there, actually. He’s got pouches there for his clips that you can put in if you want. Got another pouch here for letters, I’m assuming. On the back, we’ve got his canteen, we’ve got his shovel.

The shovel’s not the greatest quality. It’s just kind of cheap plastic. But yeah, moving on, we’ve got another pouch here with … I don’t have anything in it. There’s another pouch, and then over here, we’ve got this kind of backpack. All right. Then of course his belt. But yeah, as you can see, a lot of stuff packed onto him. 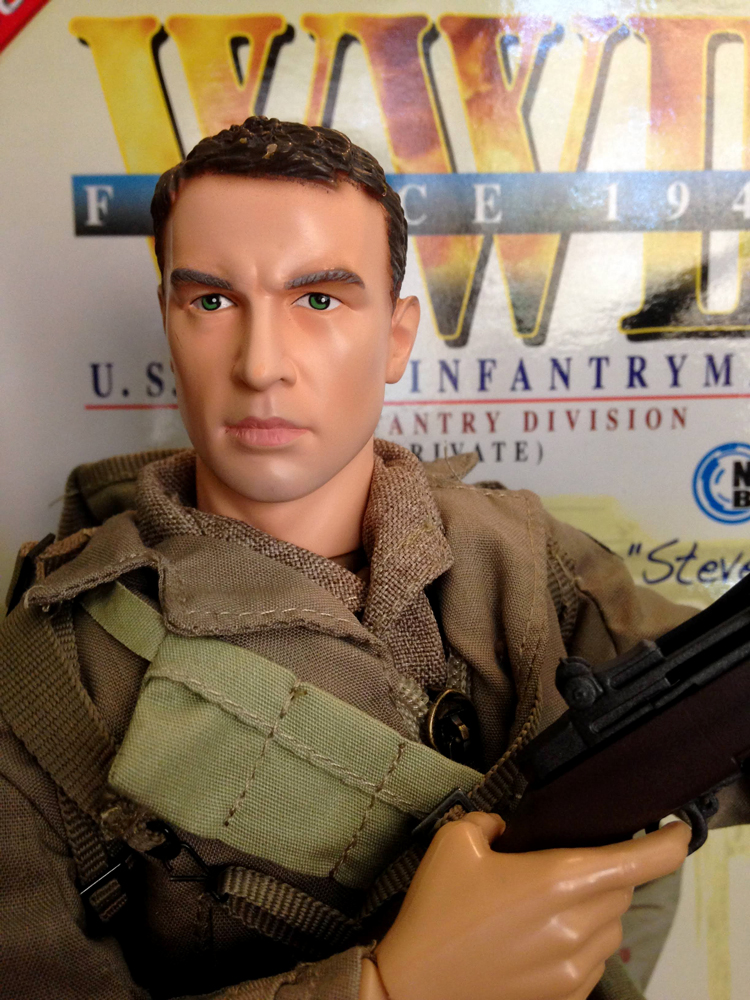 As for his uniform, he’s got this nice jacket, and there’s a little badge or insignia that you can put on there. Looks good. Underneath this, he’s just got a standard US shirt there. Then we’ve got his pants and his boots, which are great quality, as always.

All right. So a very detailed figure that is really packed with a ton of equipment, hence the name Gear Plus. But this is a great figure, and one that I really recommend picking up. But he is very hard to get a hold of, so yeah, definitely not easy, especially to find him for a good price. Hope you guys enjoyed this review. Once again, I do recommend picking this guy up if you can find him. He’s a great figure. And you can get some cool looks with him, either with his grease gun or his M1 Garand. You’ve got a lot of options there. Thanks a lot for watching, guys. I will see you in the next review.