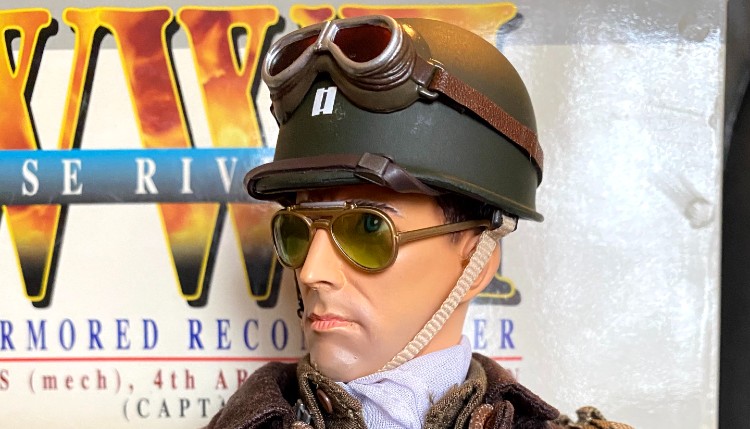 Welcome back. This is Dragon figure, captain Ben Harris. He is a US armored recon officer, and a figure that I have been trying to get ahold of for a good while. He is very rare, big surprise, but I feel like most Dragon figures are rare at this point. But especially this one. He is a difficult figure to track down. So I’m very excited to show this one to you. He’s very beautiful. Let’s go ahead and jump right in. Let’s take a look at the box. 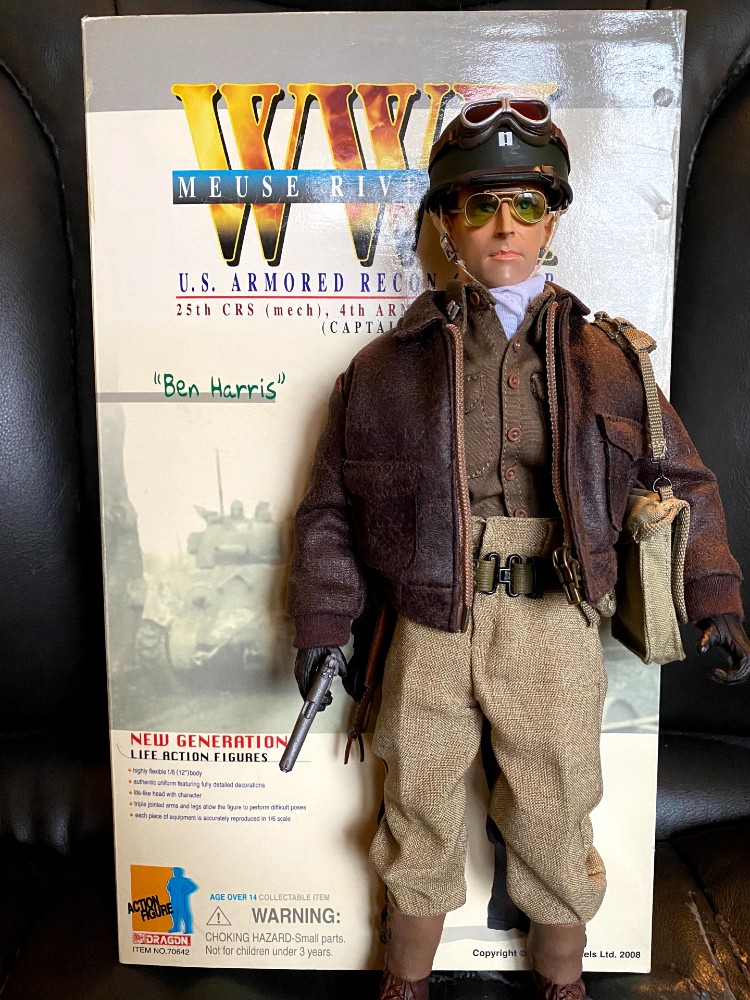 So there’s a picture of him. A really, really awesome, super unique hooking figure, especially with that leather jacket that he’s got. On the side you see another picture of him in a different pose. He’s got his sunglasses on in that picture. And here’s the back. And this one came out in 2008. All right, so beautiful looking box. It was a little worn, unfortunately, but still really awesome. I love the pictures on this one. Let’s go ahead and bring out the figure now. All right guys, here is Ben Harris. I don’t know why, but he reminds me a lot of that guy in Band of Brothers. I believe his name is captain Sobel. Something about him. He just kind of resembles him a little bit. Maybe it’s still other jacket and the fact that he’s a captain as well. But that’s who I keep thinking of. 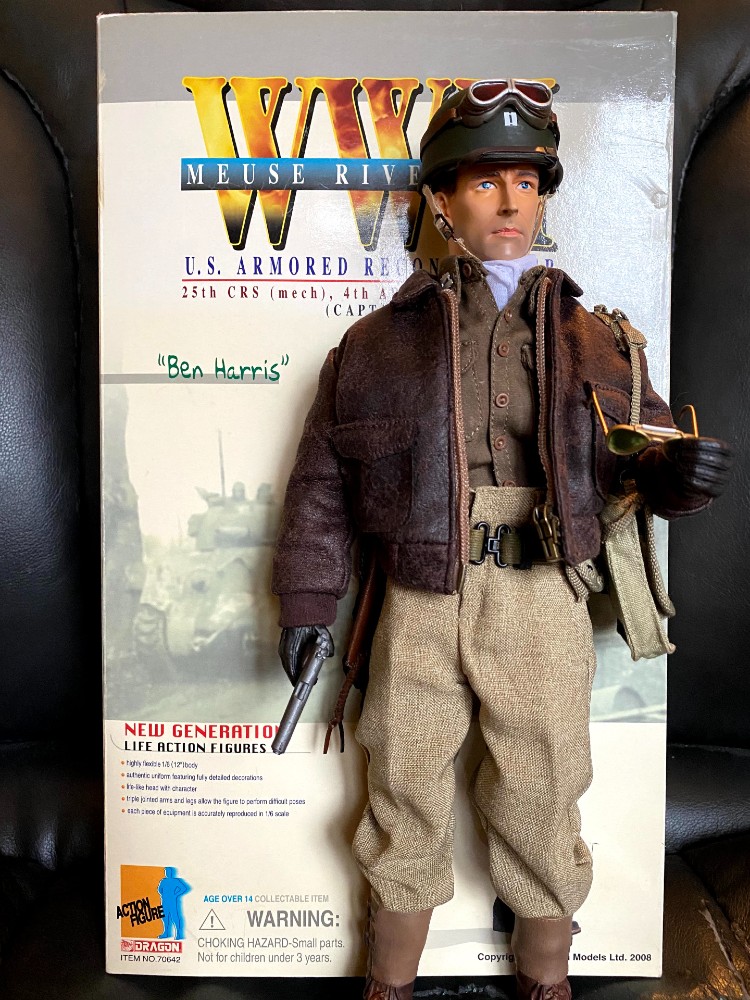 But as you can see guys, a beautiful, beautiful figure. Can’t tell you how happy I am to finally own this one. He’s easily become one of my favorite US figures to date. So let’s go ahead and take a look at some of his equipment and accessories. So the only weapon that he comes with is the pistol, and he holds it pretty well in his hands. The gloves… Can’t really do much with the gloves, it’s a little restricted there, so his finger can’t really touch the trigger, but he still holds it well enough there. He was brand new, but unfortunately his hand was broken, so that’s why the glove pops off. I’ll get that back on in a second though. It’s pretty easy to put back on. But there’s a look at the pistol. Standard Dragon model here. And let me just put this back on for you. 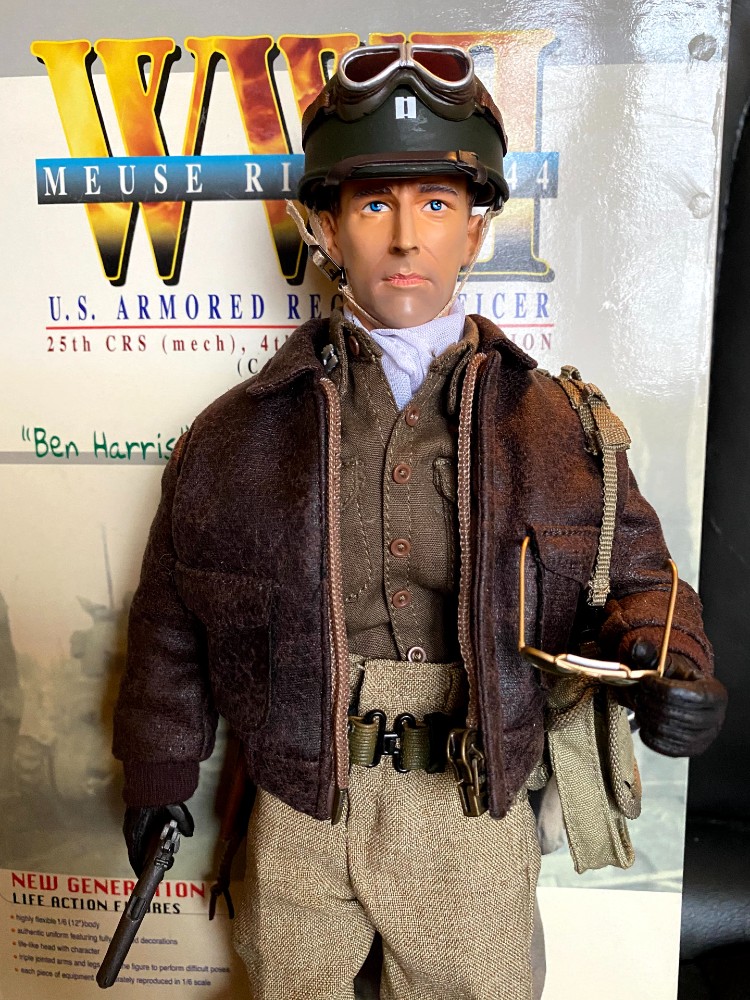 All right, so he does come with the sunglasses, which are really nice. Great accessory there. Let me go ahead and put that on for you. There he is with his sunglasses on. Looks super awesome. I love that. It’s almost got like a greenish tint on the lenses. It looks really good though. So yeah, let me take those off. And you can see he’s got the goggles on top of his helmet. And there’s the helmet. The little captain symbol that you see there on the front is not your typical sticker. It’s actually, I guess a water mark you would call it, a water sticker or whatever. Very delicate. You have to put it under water and then slide this onto the helmet and it’ll stay in place hopefully. They gave me two. The first one ripped in half, so thankfully I had another one. And this one, thankfully, went right on and is staying there for the moment. But that looks really awesome. You do have to be really careful with those water stickers or watermarks, whatever you call them. Very delicate. 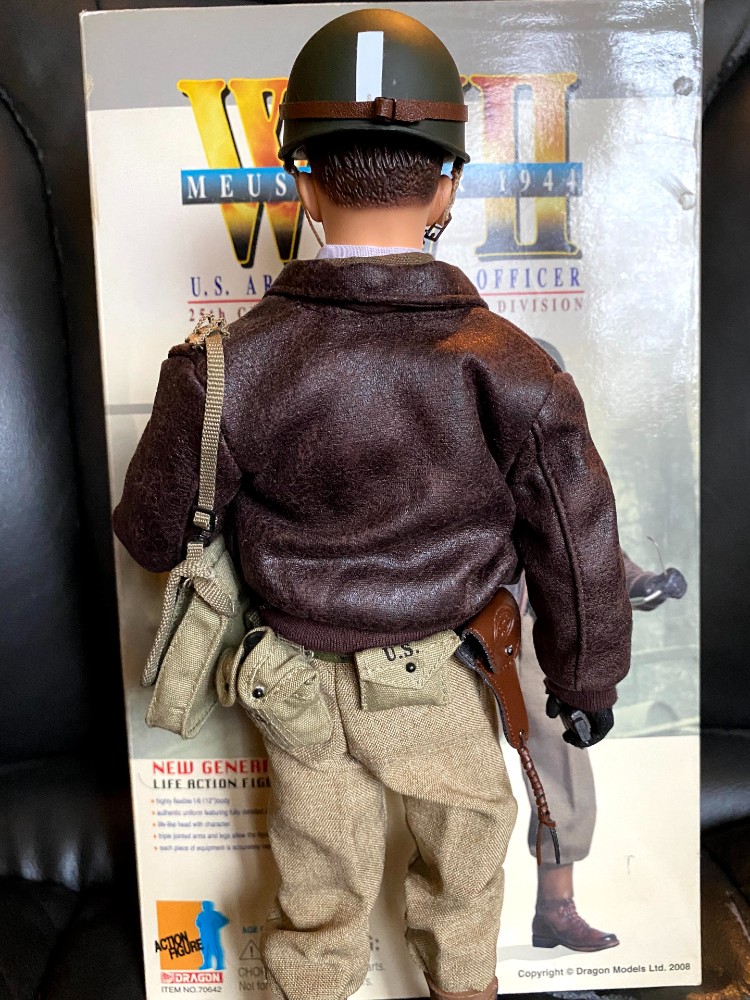 And then on the back you can see he’s got another symbol there. But really beautiful helmet. And let me take it off. It is one of the metal helmets, and you can see the straps need to be glued back on. unfortunately guys, this figure did have a few issues. He was new, but yeah, a few issues there, but here’s a better look at the helmet. Really nice. And I like the head sculpt on this one as well. He’s got very piercing blue eyes, but it’s a nice head sculpt. So there’s not a whole lot left to show. As far as the equipment he’s got this… This is actually a map case, according to the back of the box. I do have a big complaint about this, though. You can see this strap is really, really short. I tried to loosen it up as much as I could, but there’s only so much of it, so I can only really fit it around this shoulder. 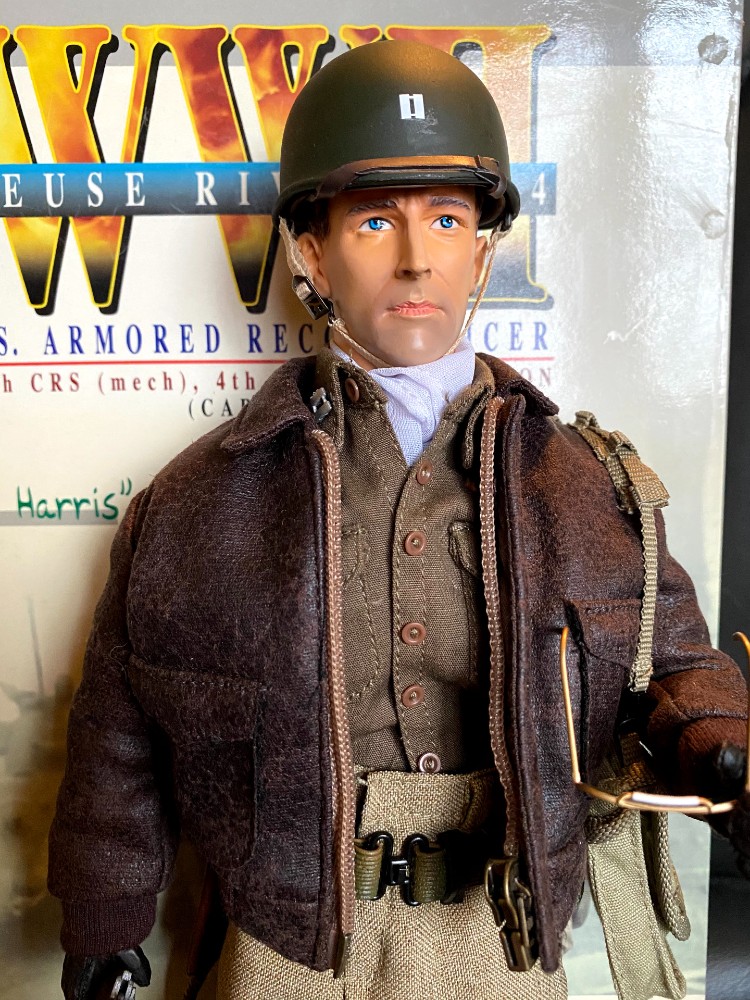 But if you look on the box, they got it all the way on the other side of his chest there, coming across his chest onto his other shoulder, which is just not possible with this. So the strap is really short. Not sure what happened there. Must’ve been a manufacturing error. Unfortunately, but whatever. That’s my only complaint with this figure. I’m not sure if that’s the case with other ones. If you have this figure, let me know if yours is the same, has the same problem. Anyway, on his belt, he’s got a pouch there for extra clips for his pistol and you can see his holster over there. His canteen, first aid pouch. 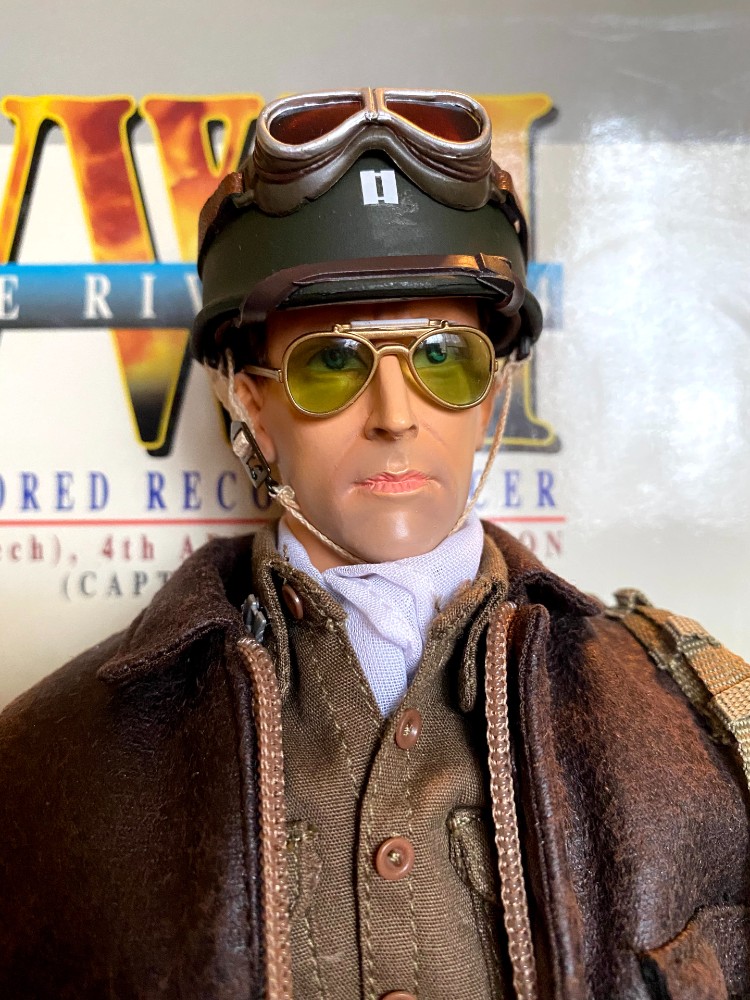 And one of the biggest highlights of the figure is of course his leather jacket, which is absolutely beautiful. This is one of the biggest reasons why I really wanted this figure was because of this jacket. And it’s just really good quality. It’s not smooth at all. It’s got a very rough feeling to it, like it’s battle worn in a way, which it’s just really, really awesome. Very impressed with that. You see he also has of course his uniform underneath and then a white scarf. And over here, we’ve got a captain badge on his collar, and his trousers, of course, and his boots. 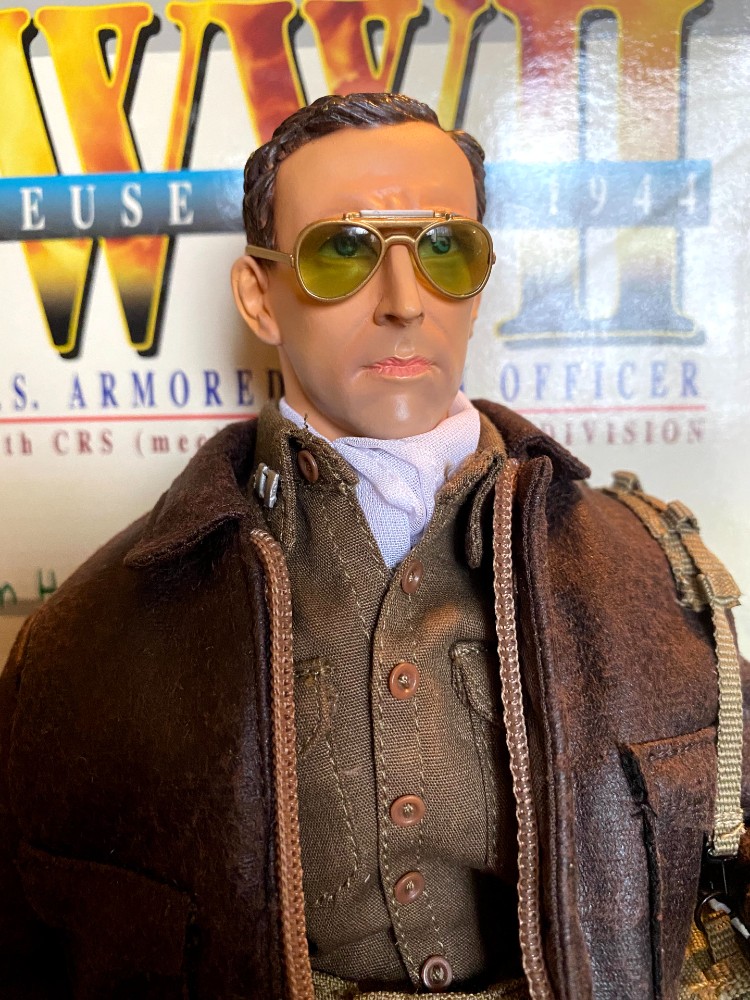 So overall excellent quality on this figure. The only issue is really for me, the map case, which is a disappointment. But other than that, I am absolutely really in love with this figure. I know that sounds weird, but really loved this one. Very happy to have him and I definitely recommend him. In the past he has been really scarce, but I have noticed he is popping up a little bit more recently, and actually I believe he’s available for sale on cyberhobby.com. I can actually post a link. I’m not sure if he still is, but I noticed that they were selling him. Of course, that is out in Hong Kong, so you are going to have to get them from overseas, but that’s pretty cool that they’re selling him again, because he is a very difficult figure to find online. It took me a long time to get him. Thanks a lot guys. Hope you enjoyed this review and I will see you next time. 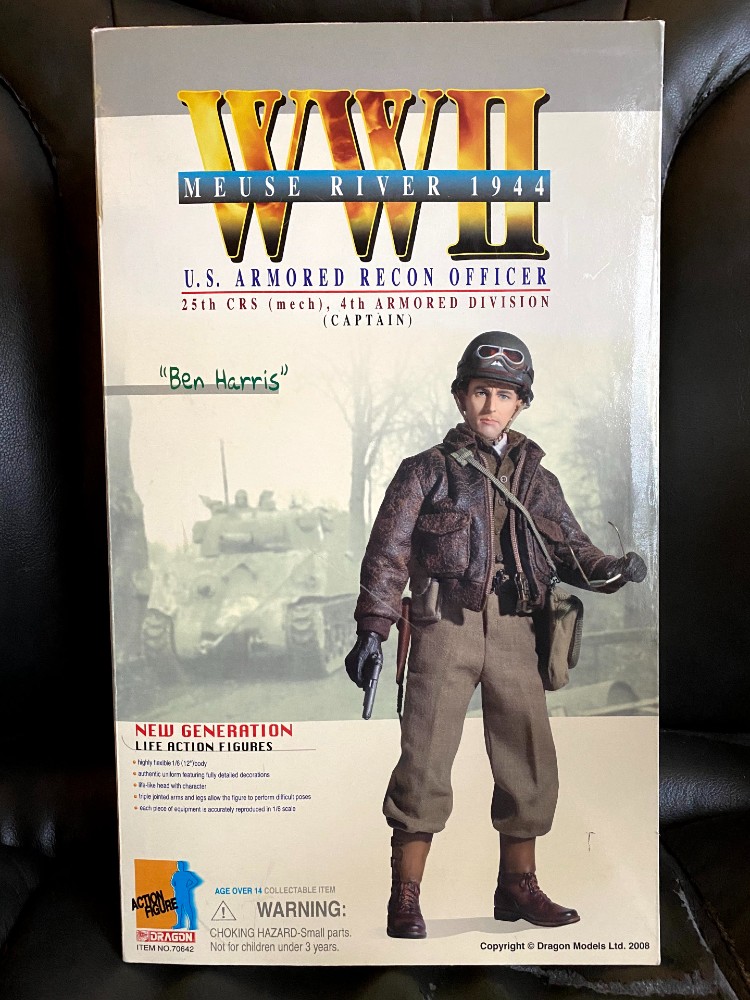 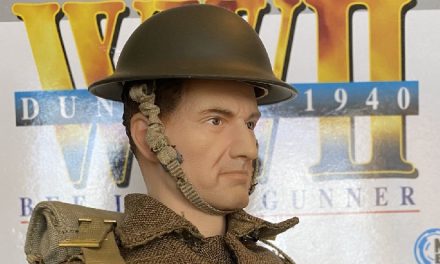 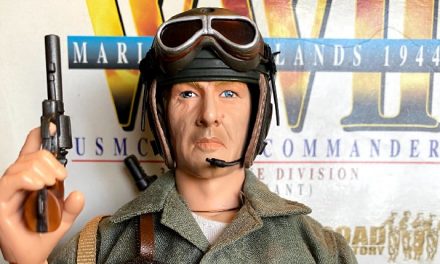 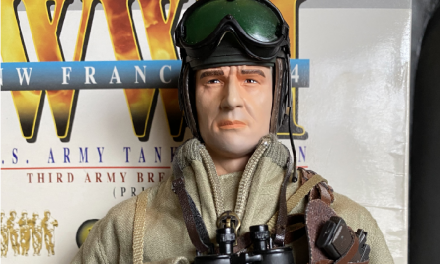